Is it possible for a reptile to be amphibious?

So, I'm building this world where most of the lifeforms, for one reason or another, are reptiles. Now, I know there have been reptile dominant periods in Earth's history, so it isn't impossible for the modern ecosystem of another planet to be predominantly reptiles as well. I am working on the aquatic niches right now and I'm wondering, is it possible for a reptile to be amphibious? Or would an amphibious reptile just be an amphibian? To make things clear, here is what I am proposing for the life cycle of an amphibious reptile: 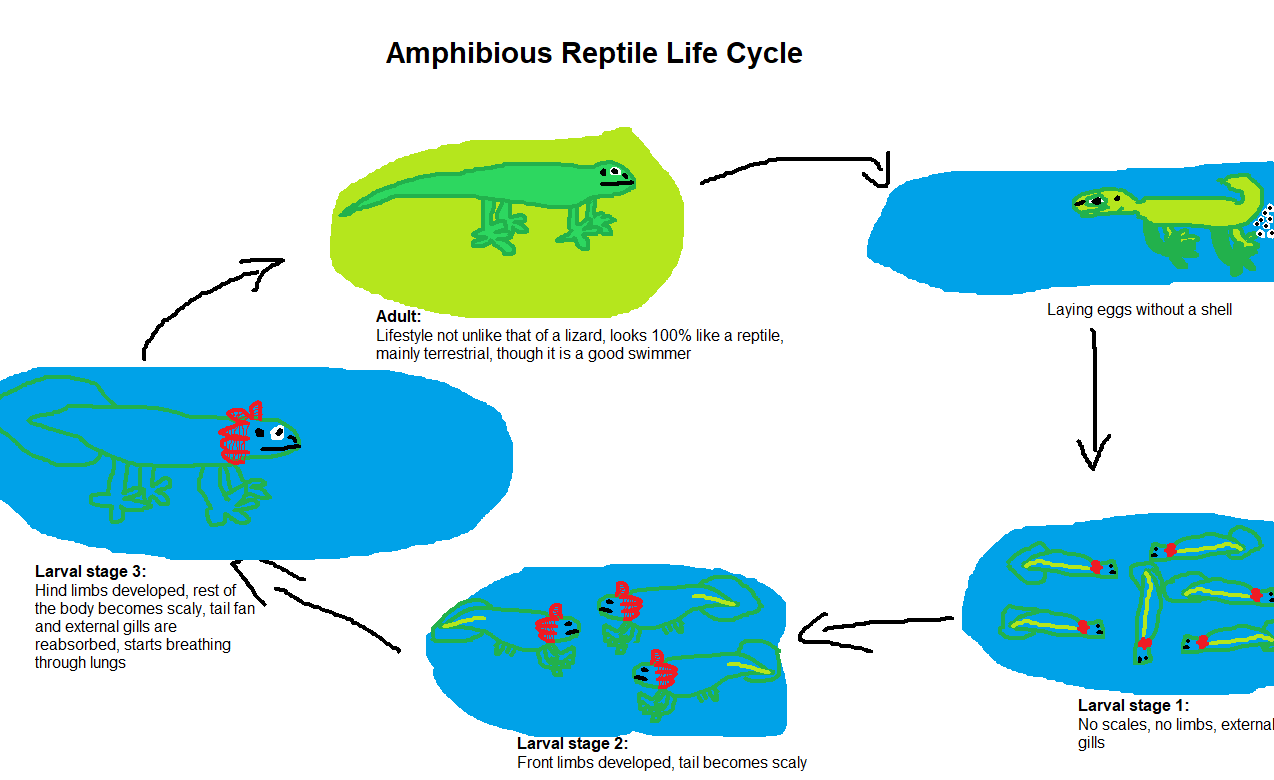 So, their larvae look kind of like salamander larvae except for one thing, scales growing from the smooth skin(which is partly why I made them have external gills instead of the internal gills that fish have). As they grow, they look more and more like an aquatic lizard than a salamander because of the scale growth. As for their habitat, they live in ponds and lakes. They start off eating algae and other forms of plankton. As they grow, they eat bigger animals including fish, small aquatic reptiles, and arthropods.

Once they get to stage 3 of the larval form, the lungs have matured enough for them to start breathing through their lungs. As such, they reabsorb their external gills. And as the tail gets longer and more muscular, the tail fan gets reabsorbed. Once both the external gills and the tail fan have been reabsorbed, they are adults and they move from the water onto the land and live their adult lives a lot like that of a lizard.

The adults keep growing for a while. They also eat smaller reptiles and arthropods, so their diet is very similar to the larval diet. Occasionally, an adult will eat fish, but this normally occurs only when they are swimming from one place to another. When they are ready to lay their eggs, they go to a nearby pond, swim to a good location, and then lay their eggs.

Is this plausible? An amphibious reptile? Or would this just be an amphibian, despite them growing scales from their smooth larval skin and not needing to keep their skin moist as adults?

You basically just described the last common ancestor of reptiles and amphibians so yeah, absolutely possible. The only issue is that this would be an absolutely ancient species, or a living fossil type situation.

I got your amphibious reptile right here! Its a sea snake! 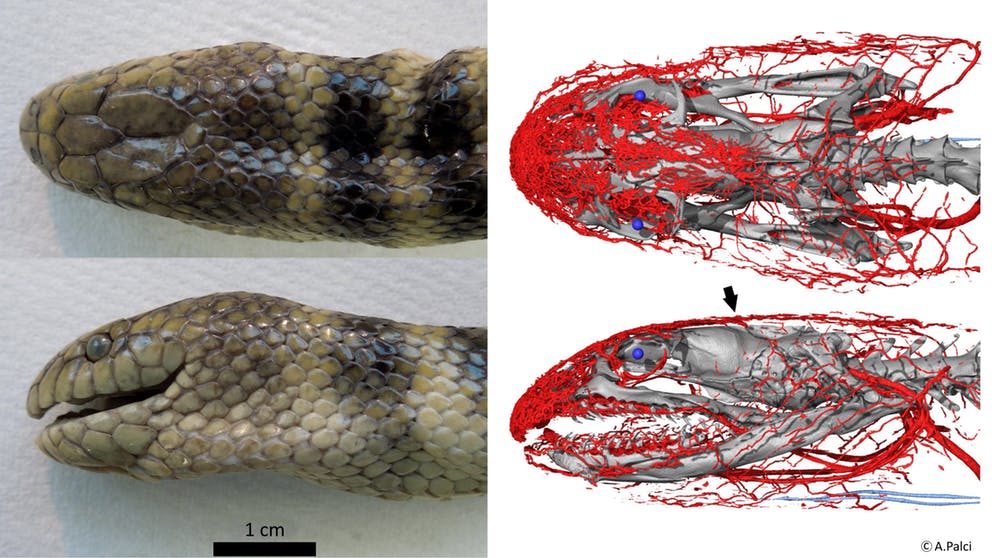 Only fish have gills, right? Wrong. Meet Hydrophis cyanocinctus, a snake that can breathe through the top of its own head. The 3m species, which is native to Australian and Asian coastal waters, can draw in oxygen with the help of a unique set of blood vessels below the skin in its snout and forehead. The network of blood vessels works very similarly to a fish’s gills, and represents a newly discovered addition to the extraordinary range of adaptations that sea snakes use to thrive below the waves.

Other species of sea snakes are known to use cutaneous respiration to supplement their lungs. The more skin surface they can recruit for respiration, the less they need to surface and breathe air. These snakes already have dispensed with eggs, and bear live young directly into the water.

Your proposed amphibian is less water adapted than these sea snakes. There are some sea snakes (in a different lineage) which are more typical snakes, coming to land to lay eggs and breathing with lungs. You could use one of the existing sea snake plan for your larval stag, omitting your proposed external gills. When young they are long and flattened. As they grow and body mass increases the surface to volume ratio becomes less favorable for skin breathing and they need to use lungs. Eventually they leave the water as large serpents and switch to air breathing. They return to the water to deliver their young into it.

If you want legs on your land dwellers you could augment the vestigial legs on some snakes and skinks.

Maybe these would move like those two legged monsters in the latest King Kong movie?

Taxonomically speaking, the class of a living entity is usually determined by a common mode of reproduction. The class Reptilia is different from the class Mamalia and different from the class Amphibia primarily because amphibians (usually) deposit gel-encased eggs in bodies of water, reptiles (usually) produce leathery eggs that they bury, and mammals (usually) have live births, with no obvious egg shell at any point. There are exceptions — e.g., snakes, which produce eggs but hatch them internally, producing a kind of live birth — but as a rule...

What you're describing might be treated as a subclass of reptiles or amphibians (the way monotremes are considered a subclass of mammals), or they might be seen as a separate class all their own. That would depend largely on were taxonomists thought that group broke off from the main classes: the farther back the split, the more likely the group would be treated as a separate class. Having a primitive feature like gills that are reabsorbed would make me think this group is closer to amphibians: i.e., an amphibian group that took on reptilian features in convergent evolution. That would take a particular evolutionary context: perhaps a region that was consistently swampy during one season (giving an advantage to the amphibian breeding pattern) but that dried up and became arid during other seasons (giving an advantage to reptile-like features). But it could also be retrograde evolution: a species of reptile that retreated towards amphibian-like breeding patterns (perhaps to avoid some particularly successful land-based egg predator).

Modern amphibians have evolved to live in water and other damp places, and have many adaptations for this, such as their smooth, moist skin, sac-like lungs, and inability to conserve water. This means that an amphibian that evolved to live on land would likely be quite lizard-like, especially if they were a reptilliomorph

2
Evolution of vipers (merfolk)
2
Anatomically Correct Vodník
0
Is the evolution of my aliens realistic?
4
Aquatic lizard: Is being warm blooded essential?
4
Feasibility of albino lizard people
6
Could an amniote evolve into an amphibian?
4
Reptilian beauty standards
5
Could a frog develop into a fish?
3
What would the claws, teeth, and eyes look like on my species?