Compasses don't detect North, they align to the field.

This is a very important point - the needle in a compass is merely a magnet that sits inside the magnetic field of the earth, and those two fields interact. One of the key attributes of a compass is not the magnet, but the suspension of the magnet in a medium that allows it to spin very easily. That way, the path of least resistance for the magnet is NOT to stay where it is despite the increase in magnetic resistance, but to actually realign itself to the fields around the earth. 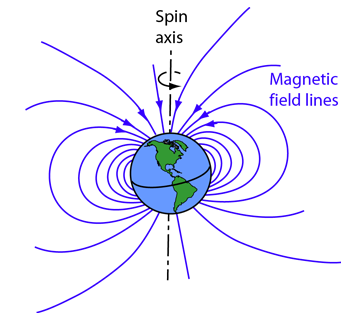 So, a compass is not aligning to North, or even to south, but to the field which runs between the two. In point of fact, if you didn't know which end of your magnet was polarised to north, the needle wouldn't help you any and you would have a 50% chance of heading off in EXACTLY the wrong direction unless you used other clues, like the location of the sun in the sky and whether it was morning or afternoon for the day where you are.

So, your people are not even able to detect either North or South, they can just detect the alignment of the field. Your navigators will have a natural instinct of whether they are travelling in parallel or at some angle to the field they can sense, and they may even have some natural sense as to which pole they are closer to (whether they are in the northern or southern hemisphere). As such, they may be able to determine which direction they should head in given that perception and whether they know themselves to be in the North or the South, but it is important to note that in navigational terms, a compass is only one of a handful of tools that a good navigator needs.

Sextants have been around for hundreds of years to determine latitude, and a good spring based clock (pendula don't work on boats) was needed to solve the problem of longitude. All the compass tells you is your orientation, not where you are. So your people need one less tool to determine where they're headed, but they will still need navigational skills to figure out where they actually are.

Not the answer you're looking for? Browse other questions tagged science-based reality-check magic magnetism navigation or ask your own question.

5
Is magnetic telepathy possible?
7
Can an android be "immune" to electromagnetic forces?
25
What are the ley lines this nomadic people uses to follow the same path year after year?
25
What would be the side effects of a massive, strong magnetic field?
9
Could Xenarthrans Be Ferried Outside South America?
27
Without modern electronics, how could you determine your longitude, latitude, and altitude while lost deep underground?
12
Figuring out the Cosmic Compass (Updated)
3
Navigating in a Subsurface Ocean
0
Would a torsion balance be able to determine the poles of a planet which has no magnetic field?
3
How do you navigate on a cylindrical world?