How could a non round land creature puff up like a balloon?

I've got this ferret shaped land creature from a dream that can make its body expand so it looks sorta like a fat sausage with limbs. It sucks in air with its big mouth to expand. It lives on a world with a thick atmosphere.

I've got this idea for how it might could work, but I want some people more knowledgeable than I am in this area to critique it.

I wish to know whether or not this would work in a living creature: Perhaps under its thick skin layer there is a cavity all around its main body (cavity is not in the limbs). There are many wire like structures connecting the skin layer to rest of the body so it is still attached and can receive blood flow. The creature can make sucked in air go to there through two openings in its throat protected by a filter. There are also two openings near its back legs where air can be expelled from this cavity at will. This also makes it able to suck and expel air at the same time so it can suck in air as long as it wants till it gets tired. It can thus vacuum up prey like Kirby. I suppose it is also to make itself bigger to discourage attackers. Its skin probably looks wrinkly and baggy when not expanded.

Pseudo-Avian Respiration. Birds' bodies have both lungs, where gas exchange takes place, and also air sacs. A bird's air sacs are located within the thoraco-abdominal cavity. This creature's air sacs, however, will be located outside the body cavity, but will function in a way broadly analogous to that of a bird's breathing.

Description. Surrounding the thoraco-abdominal cavities of this animal are sub-cutaneous air sacs. At both the cepahalic & caudal ends of the air sacs are sphincters that will close to trap air and open to receive or expel air. A pair of paratracheas branches off the bronchus above the clavicles and runs down either side of the dorsal aspect of the spine. The air sacs are thin walled and stretchy and thus can be inflated to a relatively high volume. Rapidly contractile muscles allow for variable speed ejection of air in peristaltic fashion. Each sac thus encompasses the animal's body and along the ventral aspect empties into a common effluent conduit. This is a muscular structure that, much like the urethra, can expel air in short bursts or open wide for a forceful blast. This conduit in turn runs down along the animal's belly and terminates in a bifurcation on either side of the uro-genital tract.

Mode of action. The animal always breathes as per normal in order to perfuse its lungs. A flap along the ventral aspect of the deep trachea is normally closed, allowing for air to escape through the mouth (normal breathing, hissing, vocalisations, etc). However, when the flap opens, spent air is redirected through the paratracheas and into the air sacs. It is from these paratracheas that the air sacs receive spent air from the lungs. Whilst the animal in breathing in, the sphincters close off the air sacs, trapping air. During the puffing up behaviour, the animal appears to be in distress, rapidly heaving and huffing and hyperventilating. This is normal, as it's simply using its lungs as bellows to fill its air sacs.

Functionality. these animals use this capacity for a variety of reasons. First and foremost, the forceful expulsion of pheromones during the mating season; secondarily, the forceful expulsion of noxious chemicals as either defense or attack against potential predators. (Think of this critter as a skunk whose stink just keeps on giving all on a 10 fps wind!) Third, less forceful winds can be generated by this creature that, when passing through the posterior openings, can excite the skin flaps to vibrate. This results in a number of long, loud (and thankfully non-stinky) calls of varying duration, timbre and percussivity.

It is interesting to note that this animal never uses this capability whilst in the water as a flotation device. Presumably because there is no way to control bodily attitude, to say nothing of locomotion! Also, this capability can not be used to "store" air for later rebreathing, as it comprises spent air. 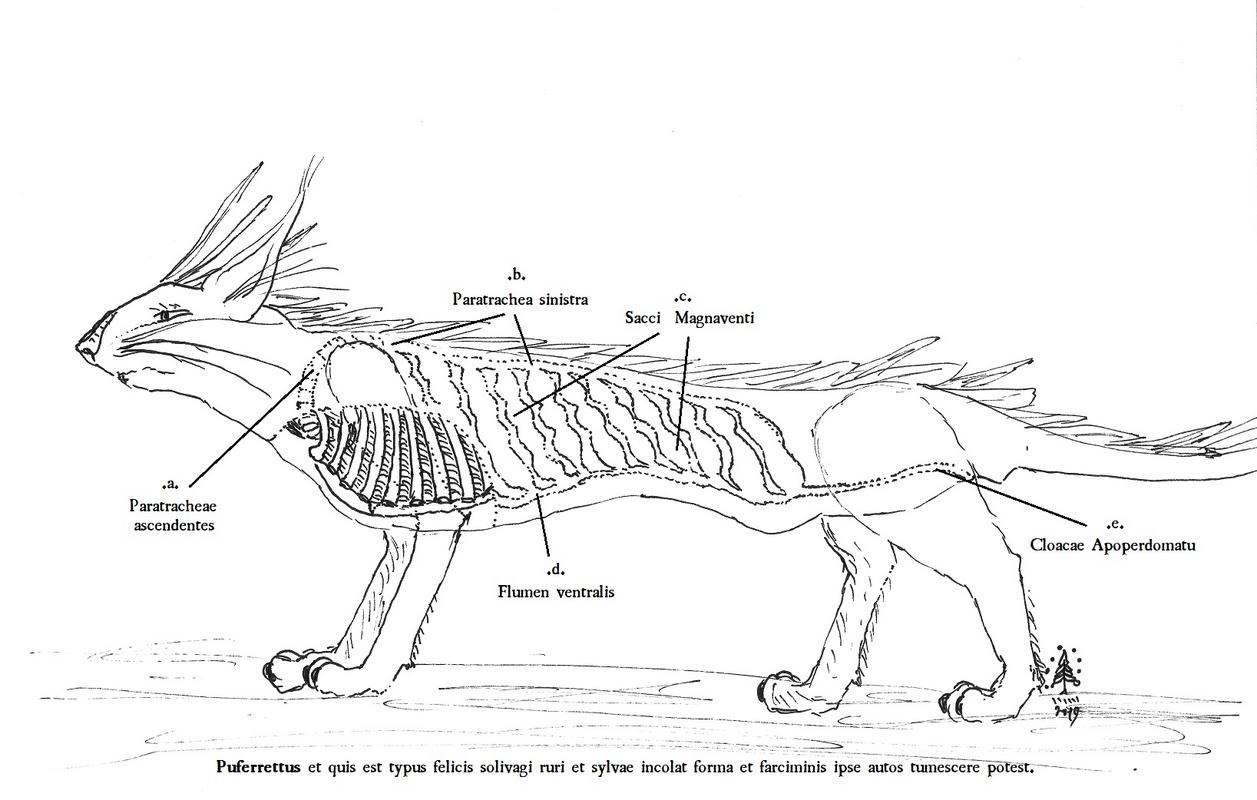 13
Does a sapient species have to be warm-blooded, and if so, can it still be a reptile?
1
How to make my humans more cold-resistant?
9
How viable is a creature that floats through the air like a living hot air balloon
5
How would a creature with a higher body temperature interact with surroundings?
7
What would a lung/gill combo organ be like?
6
An organic "mecha" or "krang". Possible or unreasonable?
3
How two-limbed creatures could evolve powered flight? (Amphisbaenia)
3
Could papillae or another muscular protrusion act like tube feet on a land-dwelling creature?