Can wormholes be used to trap people?

I was looking at the diagram for a wormhole: A 2D plane is bent and then its ends are pinched together, creating a kind of 3D tunnel representation of what a 2D wormhole would be: 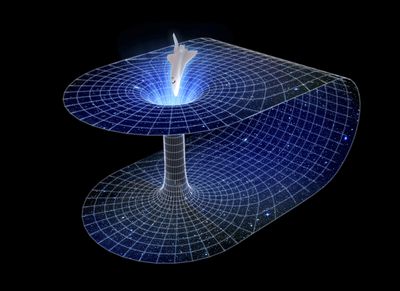 This has made me think about how to visualize a wormhole in 3 dimensions, and I thought long and hard about the "tunnel" that connects the two points in spacetime.

From a 2D standpoint, if you are inside the tunnel, then you could theoretically turn to the left or right, and then keep going straight forever. From a 3D standpoint, you would just going around the tunnel in circles, but from your own 2D perspective, you would be walking continuously in the same direction with the world looping forever. In other words, until you turn again, you're stuck in there.

Could this be possible in a 3D representation and be used as a plot point in my story?

Is it possible to get trapped inside a wormhole?

Maybe this could be achieved by blocking off the "entrances" to the wormholes (by surrounding the wormhole on all sides at each point) while someone is traversing it?

Or (and this is what I believe to be the answer) are the two points in spacetime blended together seamlessly, where there isn't really a "space" between them? Basically, is the diagram a false representation simply used to help us visualize it? Is there no "tunnel" at all?

There is a neck of the wormhole, a narrow (relatively, if not absolutely) volume that all traffic has to pass through. I don't think anyone has really described the geometry of this space, but the long tunnel-like structures you see in diagrams are almost certainly not what it will be like. Space is likely to be extremely warped around the neck, but it will be very obvious from within that space where the exits are because the stars in those directions won't look crazily warped and stretched. More importantly, unless the neck of the wormhole has an absolutely vast diameter, I think you'll be able to look around and see yourself, so it'll be obvious that you're going the wrong way.

I'm not sure how you can practically obstruct the entrance to a wormhole, beyond completely englobing it, and quickly and subtly conjuring up enough mass to practically hole up an interplanetary spacecraft with an interesting drive (remember the Kzinti lesson!). You may as well just shoot them, or (worst case) collapse the wormhole on them, which will probably turn them into a short-lived black hole. Crude, but undeniably effective.

Maybe open entry to another wormhole just in front of first one, then place exit of second one in front of entry on first? But remember to make it tight, so no one could escape.

Place one end of the wormhole below the unlucky recipient and the other end immediately above. The recipient will fall into the floor and out of the ceiling, then back into the floor indefinitely.

If you haven't figured that out, you've never played Portal.

It may happen that once you enter the wormhole, the exit collapses and it is not possible to turn back, thus causing you to get trapped inside the tunnel.

As of the reason why the exit collapsed, there could be a variety of reasons, for instance,

Not the answer you're looking for? Browse other questions tagged science-based wormholes relativity or ask your own question.

7
Taming wormholes
2
Creating wormholes that aren't magic
10
What are the consequences of literal interstellar travel?
6
How does space between ends of a wormhole work?
11
What happens to the space created due to wormholes?
1
Probing through wormholes
6
Avoiding Violation of Causality with Stable Wormholes
5
Long range laser using wormholes
6
What can these negative-mass-free wormholes be used for?
0
Could these new wormholes be used as a hammer space?