How do I create a “magic particle” to make magic work with physics?

I'm trying to make a fantasy-esque magic system in which everything works pretty much the same as real life, except there's a sort of "magic particle" that makes magic possible, but with physics. In my story, this magic particle permeates the entire universe, and has been there since the creation of it. Half of the population of earth can control this magic particle to some extent. (Animals are also affected by this, and thus there's a couple of species of animals that specifically evolved alongside magic.) Basically, all this magic is supposed to follow the laws of physics, so for example an actual laser beam would never instantly vaporize things in real life, so it can't here either. The problem here comes with making that magic actually happen. The main problem is ceating the laser beam, not really how it'd work. My main goal here is to marry magic & physics to make a compromise between the two: the magic particle.

Thus, my main question: What properties would this "magic particle" have to make it able to mess with matter in order to make magic possible?

I think you rethink your question, as creating a "magical particle" which would smoothly fit into modern scientific understanding would require at least a degree to get it somewhat plausible to an expert and go right above most reader's heads anyways. Instead, I recommend you go a different route that will solve your problem (or at least what I think you want to create.

Let me present, an energy-based magic system in a step-by-step format:

Advantages of such a system:

First, we establish our spellcaster's stamina curve. This is the relationship between how much power they can output (measured in watts) for how long of a time. Take a look at this: 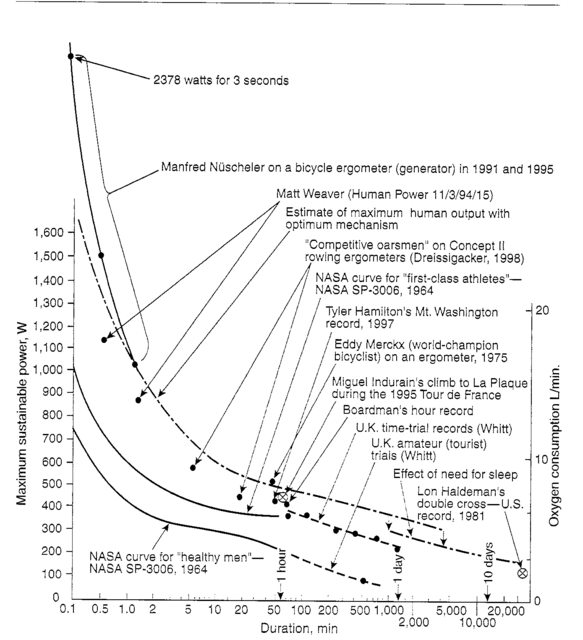 You can use these curves to calculate what sorts of spells that a magically-capable creature would be able to accomplish. To ensure the spell is possible to cast, you just need to make sure that the power levels and caloric costs never exceed the max. For example: 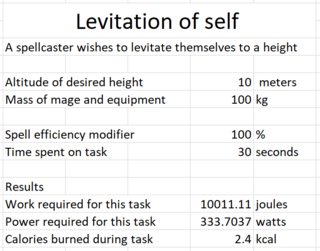 In this example, the spellcaster levitates themselves upwards 10 meters over the course of 30 seconds. During those 30 seconds, they are outputting ~330 watts of power. This would leave the average healthy person winded and be the equivalent of a short sprint. (according to the NASA curve on the graph, 300 watts is only maintainable for five minutes by healthy people until they're out of stamina)

The spellcaster focuses themselves on converting their own power output into radiation. Converting from the spellcaster's chemical energy to radiation is something that mana particles can just do. The spellcaster needs to be skilled enough to manifest where this radiation escapes to be a concentrated point and needs to get all the radiation onto a proper wavelength and pointing in the right direction. How the particles get the energy from the spellcaster and into the point of conversion isn't important, you can just say that mana particles move on a different plane of reality, or like electrons, don't have a precise location but rather a probability distribution of where they're likely to be. Then, you can just use standard laser power levels and their effects. For example, a 60 watt co2 laser can burn through plywood around a centimeter or two thick provided it's properly focused. Now if you throw in some realism in the form of spell efficiency modifiers (presumably no fantasy spellcaster knows the most efficient mana pattern possible to convert to radiation) and have the beam loose coherence after distance (as focusing the beam takes immense spellcaster skill), you can have a "realistic" laser spell. The spellcaster might be firing off 80 watts of laser power (at an expenditure of 200 watts) and such laser beams would be able to instantly blind people, and give nasty burns at a distance. 80 watts would not be enough to cut anything at range. At the extreme, if a skilled spellcaster goes "all out" and is able to get off a 2000 watt beam before they fall unconscious from exhaustion that could do some damage. 2kw laser systems are cable of cutting centimeter-thick sheets of metal with ease.

One possibility is that it can, under special circumstances, interfere in specific ways with the normal fundamental forces so as to alter their effects. For most magical effects, really, you need only alter the electromagnetic and gravitational interactions.

For instance, in a specific area, it might increase, decrease, or redirect the effect of gravitational force. The applications of that are obvious; flight, levitation, increasing or reducing weight, tossing things around, and so on. Fool around with the electromagnetic field and you can do things like alter light, create lightning, throw around magnetic fields, fool with chemical processes, or even break down an object into its constituent elements (aka, the disintegration spell).

You could technobabble it by saying it's something like visible light: most of the time it's incoherent and doesn't have a huge physical effect. Focus it and make it coherent, and like light now you have a laser that's potentially capable of a great deal of physical effect.

At heart, much of physics is probabilistic. Your new particle could be the quantum particle of luck, the tychion. That's from the Greek τυχη, meaning luck.

A means of generating tychions could achieve things like: influence the weather, influence a person's decisions, or influence the flip of a coin. If you fell out of a window you would land in a huge pile of cushions. If you bought a lottery ticket, you'd win but not the main prize because that would attract attention that would be bad luck.

Generating anti-tychions could be a method of bestowing a curse. Imagine the victim doused in them. He might never win a game of luck. He might have bad weather every day. Unless he wanted rain for his garden in which case it would be sunny. If HE fell out of a window, he would land on a big stack of kitchen cutlery.

Having a black cat cross your path could actually be unlucky because they suck up all the tychions in the neighborhood. Breaking a mirror could drive them away. The triangle a ladder makes could be a place that tychions are excluded. A horseshoe could be a structure that catches them and holds on to them.

Creating good luck particles might also create bad luck particles in equal number. Getting rid of the bad ones might mean you needed a victim. Or you might have to invest a lot of time accepting bad luck in order to save up for that one important time when you need all the luck you can manage. Or, you might get robbed of your stored good luck. What a stroke of bad luck!

Your particle could be one that modifies the fundamental forces around it depending on how it is manipulated (I'll leave the details up to you). The fundamental forces, weak nuclear, strong nuclear, gravity, and electromagnetism, together control literally every particle interaction in the known universe. If your particle can affect even one of those forces, say it could increase or decrease the local weak nuclear force, you could do virtually anything. You could change atoms into other atoms, affect interactions with electrons, even create elements that would otherwise be unstable. From there you could affect gravity to focus radiation, and boom you have a magic laser based in physics.

DISCLAIMER: I'm not a physicist, there's probably something heinously wrong with my scenario, but from my amateur understanding (watching a lot of physics lectures) the statement about being able to do virtually anything by modifying the fundamental forces should be accurate.

It's possible this magic particle is what gives the Higgs field that strange seeming energy from nowhere. Maybe, additionally, the magic particle couples through mechanisms like the Higgs to create the intrinsic electroweak charges.

Placed in this central position, your small changes to your magic field are multiplied greatly in nature, and most basic effects might be covered.

Not the answer you're looking for? Browse other questions tagged science-based reality-check magic physics super-powers or ask your own question.

0
How can I integrate science and magic?

27
How might telekinesis and pyrokinesis work if they were possible?
3
How can a reversible elemental magic damage be explained?
1
What would be the effects on the enviroment if a Giant walked by in a world with Earth like physics?
5
Most energy efficent attacks in a physics-bound magic system
6
Lightsaber + Pogostick: How would deceleration work on an extendable “arm” of pure handwavium-energy?