Unless I am mistaken, a Jaculus, also called a javelin snake, is a creature found in Roman myth, described as a snake that hurls itself from trees and impales its prey. Its head is usually described as being somewhat pyramidal and is the part being used for impaling. They impale their prey with their heads. So I was wondering, is there any way this could exist in the wild? And if so, how large would it be and how would it evolve? Thanks!

This is quite possible

First of all, there is a type of snake that can glide from the trees in order to catch its prey. It is also called the flying or gliding snake. Wikipedia states:

Once it decides on a destination, it propels itself by thrusting its body up and away from the tree, sucking in its abdomen and flaring out its ribs to turn its body into a "pseudo concave wing", all the while making a continual serpentine motion of lateral undulation parallel to the ground to stabilize its direction in midair in order to land safely.

Second of all, reptiles with horns already exist in nature, such as the rhino-horned lizard, and there's even an actual horned snake: 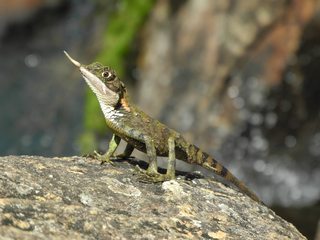 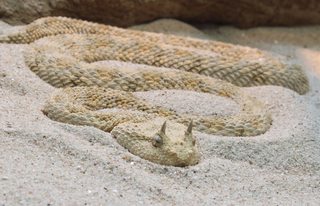 Finally, of course there are plenty of animals that exist today that use their horns as weapons, to name some:

So, putting all of these facts together, it certainly seems possible for there to exist a type of gliding snake with a thin horn or tooth (a Narwhal's 'horn' is actually a tooth) used to skewer its prey. This becomes especially possible in the depictions of a Jaculus that have wings and sometimes even legs.

A Jaculus in real life would likely have the following features:

Sometimes the Jaculus might miss, which is fine because at that point it will quickly swing its horn and whack the prey, stunning it long enough to bite it.

EDIT: Even without the gliding ability, its legs would likely allow it to jump forcefully enough to skewer its prey, especially if it jumps from varying heights and uses gravity to its advantage!

Gliding snakes are, as the other answerer said, a thing - in fact, Chrysopelea snakes can actually glide further than any other animal, at around 200 metres. However, as you commented, the glide is very slow. I think the only strategy which would produce enough force is simply launching its body a shorter distance, and skipping the gliding part - essentially, jumping.

There are snakes which can jump quite impressively, namely the painted bronzeback: here's one in action. I think this is your best bet for "hurling itself from trees". The pyramidal head is also fine, as members of the viper family tend to have quite triangular head shapes: 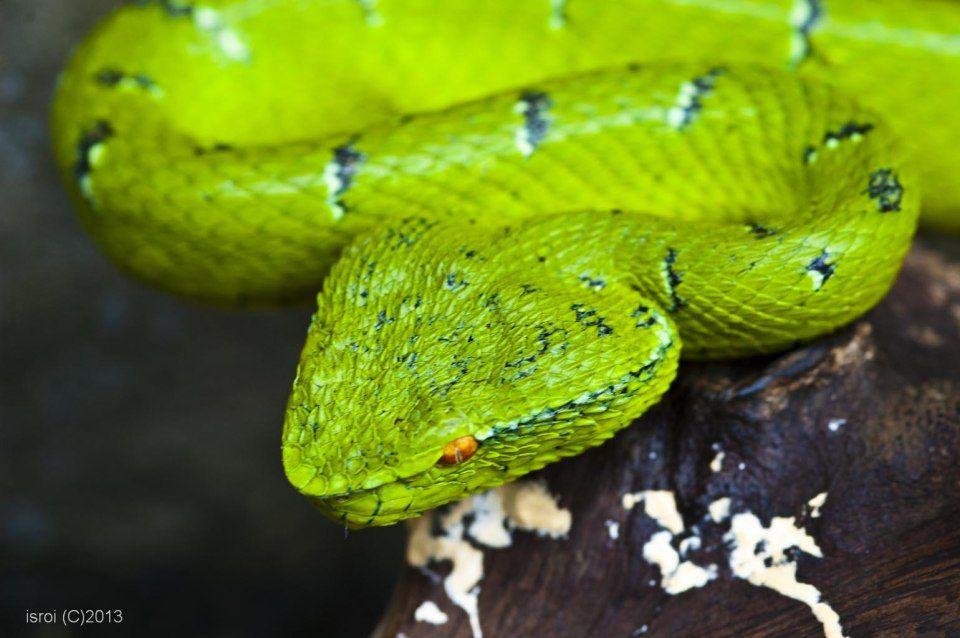 However, the most problematic part of your description is the "impaling its prey" part. I assume you mean on some kind of rostral horn-like structures? Now, there are a bunch of reptiles which have such structures, namely male horned anoles and rhinoceros chameleons. Some snakes, such as the nose-horned vipers, also have small spikes on their noses.

Despite this, using such a horn to catch prey would be pretty inefficient. For one thing, it's hard to strike accurately (as an analogy, would you rather fight someone by only punching them or only headbutting them?), and there's also the problem of transferring prey from horn to mouth. Your other answerer said that narwhals hunt like this, but that's an old hypothesis which has since been discarded.

There is one way of impaling prey I can think of which would work: a really sharp tongue. Chameleons and some lungless salamanders already use ballistic tongues to catch their food, and cone snails do a similar thing with their radulae and actually impale the victim. For this to work out, the Jaculus would have to hunt small prey which don't move around much - medium-to-large sized insects, mostly, e.g. crickets, mantises...

All that being said, it wouldn't make sense for an animal to use both strategies - leaping out of branches and firing a tongue. If the impaling part is important to you, the best compromise I can give you is that it just leaps/glides to get from A to B, and not to hunt.

Going with that last option, I think the Jaculus would be a member of the Viperidae family, which uses leaping or gliding abilities to get around and a ballistic tongue, tipped with a sharp end, to hunt small prey.

Not the answer you're looking for? Browse other questions tagged science-based reality-check mythical-creatures or ask your own question.

14
Is a four armed arboreal reptile as described viable?
22
Evolution of tree-dwelling species that will help predators find prey if prey species doesn't give it a bribe?
15
Evolution of a tree-based predator that threatens to kill/eat prey unless prey feeds it?
9
Anatomically Correct Chimera
8
Anatomically Correct Triskelion
1
Near spherical alien species - How can they move?
7
How can my dragons use their tongues to control their fire breathing?
6
How would a giant reptile creature hunt in a desert?
8
Anatomically correct Quetzalcoatl