The Great Oxidation Event...Artificially Imposed on a Tharn-Like Alternate Earth

From 2.4 to either 2.1 or two billion years ago, Earth underwent a surge in a waste product that we know as "oxygen". Before that, life thrived in an ocean rich with iron under an atmosphere loaded with carbon dioxide. This Great Oxidation Event has also been referred to as the "Oxygen Catastrophe" because for the majority of the extremophilic lifeforms of the Paleoproterozoic, this excess in oxygen proved to be a death sentence.

In the foreseeable future, the scientific community responsible for the study of alternate Earths had discovered that the ninth alternate universe identified doesn't have one Earth. Instead, it has nine--planets and moons that have a lot of the features that we'd find on Earth, like active plate tectonics, the exact size of the inner and outer cores, a strong magnetic field, to name a few. The sun they orbit is a red giant. Judging from its size and luminosity, we can confer that as of 2019, this sun has been a red giant for 542 million years and the Nine Earths orbit this star from seven to fifteen AUs away and may originally have been objects clashing between frozen water and molten rock while standing far into the frost line.

The first of the Nine Earths, orbiting the red sun from seven AUs away, is an Earth-sized planet that bears some resemblance to Tharn, one of the many worlds conjured up by Chris Wayans. 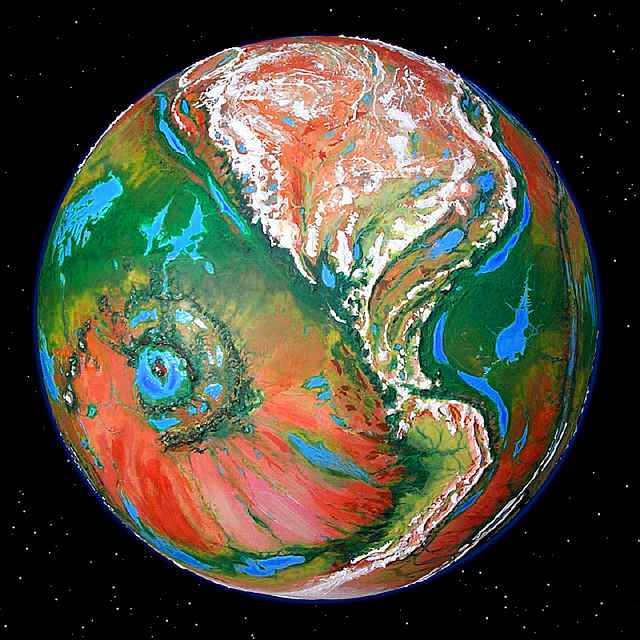 But looks can be deceiving. Its only similarity to Tharn is the amount of surface water--only 6% of the planet, averaging only anywhere between 30 and 100 meters deep. All of this alternate Earth's surface water is undrinkable, up to a dozen times more salty than our oceans. 79% of all its land is salt, indicating that when the sun turned red giant, it bore the full brunt of the transition and had the majority of its ice evaporated before proper melting could begin. In fact, atmospheric water vapor makes up 45% of this alternate Earth's water supply, which makes the overall planet so hot that it can't condense to form clouds.

Whether or not these next bits of detail would be relevant to the question, but the atmosphere also has high concentrations of salt and sulfur particles, reflecting sunlight off the atmosphere. If this were our Venus, it'd look as bright as the full moon on our night sky. A day on this alternate Earth lasts 48 hours and a whole year lasts 6,890 rotations. It spins on a vertical axis, so you won't find any seasons there, and the rotation itself is retrograde, meaning that the sun rises in the west and sets on the east.

Of course, the mad scientist community is not at all pleased with the discovery of the Nine Earths because the only life they all have are merely microbial, and they are simply not interested in boring old germs. Perhaps the maddest of them all is one Jonathon Pfeiffer, a known eco-extremist from Alice Springs. It was he who suggested that all of the Nine Earths should be terraformed so that he could dump in them all of "Earth's undesirables"--in his mind, all of the imprisoned and homeless people and the nonnative species of the world. To do that, he's going back in time, back to when the sun had been a red giant for only five million years (the length it'd usually take for a star to grow to that size.)

But terraforming this particular alternate Earth requires a particular improvisation. Since the surface water is hypersaline, his first plan is to colonize all of the isolated bodies with all the species of algae and cyanobacteria indigenous to Earth's own hypersaline body, the Dead Sea of the Middle East. His next plan is to revisit the planet 400 million years later to see how his photosynthesizers are doing. Is this long enough for the algae and cyanobacteria to absorb enough greenhouse gas to cool down the planet to the extent of condensing the hypercharged water vapor into fully loaded rainclouds?

Cripes! Your mad scientist comes from Alice Springs. He'd know about saltbush. It's native to the Australian Outback. If he can do time travel, then breeding salt-resistant plants will be easy.

This answer assumes eco-extremists will know something about plants and salt resistance. Particularly, an Australian eco-extremist as salt contamination is a common problem in the Australian environment.

Not the answer you're looking for? Browse other questions tagged science-based environment terraforming colonization alternate-earth .

2
A Blue, Drenched Mars
6
Terraforming a low oxygen Earth-like planet
4
Terraforming the Nine Earths, Episode I: Could Cyanobacteria Thrive in Muspellheim?
4
A Stable Red Giant Trinary System
5
How to Make This Alternate Earth as Black as The Dark Knight
5
How Would These Planets Affect Earth's Eccentricity?
5
How to Terraform a Dead Earth
2
The 42-Hour Day: Instant Extinction?
4
What Would the Climate Be Like on this Extreme Alternate Earth?