How big could a meteor crater be without causing significant secondary effects?

I need to wipe out a city. Not a huge one (I won't let them grow beyond a certain limit), but big enough to need to do some pretty serious damage. Let's say something similar in size to Pompeii. (yes... that Pompeii...)

My weapon of choice is a meteor. Carefully aimed, let it meander the heavens for millions of years and then ----blam!---- right on target at the appointed hour with no need of any further intervention.

Clean, clinical, and no side effects.

Only there are side effects, aren't there...?

Oh sure, a nice small meteor can make a beautiful explosion and a nice crater for itself without really having any effect on anyone outside the blast radius. But when you scale up, a bigger meteor will not only make a crater but also mess with the local or even global climate, maybe even trigger tsunamis, earthquakes, volcanoes...

Argh! I don't want any of that. All I want to do is wipe out a city with a giant space rock, but leave everything else untouched. No collateral damage. Is that really too much to ask?

Ideally, I'm hoping for a lone survivor to get away because he just happened to be leaving the city immediately before the event (uh... because I'll tell him to. Hope he listens!). The exact distance away isn't important, but he needs to be able to turn around at the right moment and see the impact close enough at hand to know exactly what happened but without getting caught up in it himself.

First, we need to know the area that must be destroyed:

So you need a radius of total destruction of only about 400 m. That's very small.

Second, let's look at the equivalent kind of nuclear detonation will have a 100 % casualty radius of about 400 m. For this, I used https://nuclearsecrecy.com/nukemap/

At a ground burst of 6 kilotons:

Finally, we need a bolide collision that generates about 6kt.

This impact calculator doesn't even go that small.

Happily, This one does.

Let's assume the bolide has a density of rock (2 g/cm³), a graze angle of 45 degrees, and a poky velocity of only 12 km/s (you can massage those numbers to get the effect you want). A 7 m (23 ft) diameter bolide will create a 6.1 kt explosion. It will create a 69 m diameter crater, and you can assume that everybody within the city wall would be killed by the blast effects and the buildings falling in on top of them.

For fun, let's bump it up to 10 m (33 ft) and 25 km/s. That's 78 kilotons, the crater is 150 m, and you just blew down those sturdy city walls and incinerated the fields and orchards outside. Be careful of going too big or too fast.

Extra credit: Lots of meteors explode or fragment before reaching ground, so that 7 m lump might be a fragment of something larger.

Let's say something similar in size to Pompeii. 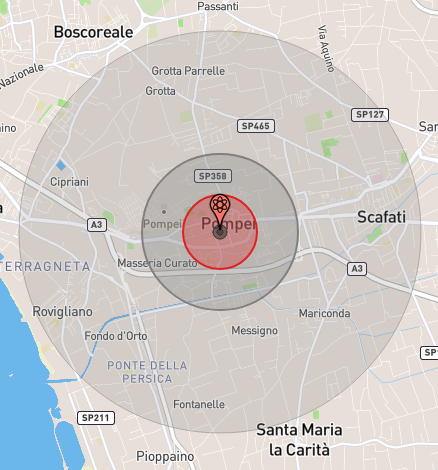 Here's an example detonation of a 15kt yield device, equivalent to the "Little Boy" device used on Hiroshima. The effects of a surface blast are shown, without showing thermal effects which will be quite different for a meterorite impact than for a nuclear explosion.

As you can see, the inner grey circle (the 5psi air blast radius lies at about 1.13km from ground zero, a little over two thirds of a mile. Within that radius, you can reasonably expect most residential buildings to be pretty badly smashed up. The outer grey circle is the 1psi overpressure radius where things like glass windows can still be smashed and lies at about 3km. If your observer was outside this radius, they've a good chance of surviving alive and intact.

There's a wealth of information on nuclear blasts of this magnitude on the interwebs, including videos. In all cases you can see that whilst 12kt is a pretty fearsome amount of destructive power, it pales in comparison to larger bombs or natural disasters like volcanic eruptions. You need not expect climatic change or huge chunks of debris being thrown for miles.

What's more difficult though is to work out exactly what kind of impactor would cause this very specific kind of devastation.

Fiddling with the Earth Impact Effects Program (also referenced by L.Dutch above), you may find (as I did) that its trick to find a set of parameters that allows a significant amount of damage to the ground within the desired sort of radius, without having a massive airburst (widely distributing the damage, or expending too much of the energy too high up).

I came up with this set of parameters, which involves an iridium asteroid (unlikely, but not impossible) to concentrate a lot of mass into a small volume. Note that the EIEP authors caution against using densities greater than iron, as they may result in unrealistic object strengths, caveat impactor etc. Iron asteroids (much more plausible) tended to break up, or deliver insufficient oomph. There will also be differences between the calculations used by nukemap and EIEP so the results aren't entirely comparable, but then hitting rocks together really hard isn't the same as a nuclear fireball, so there you go.

The exact details will depend on the effects you want. A low-altitude airburst (like this one using a smaller iron meteorite) would look neat, and provide a shotgun-like effect that distributes the damage across an area destroying everything underneath it but not producing as much collateral damage. An object that arrives intact, on the other hand, will leave a big bad crater behind. You can decide what you'd prefer.

Though the crater itself is smallish, the impact had consequences on a larger area:

The object that excavated the crater was a nickel-iron meteorite about 160 feet (50 meters) across. The speed of the impact has been a subject of some debate. Modeling initially suggested that the meteorite struck at up to 45,000 mph (20 km/s) but more recent research suggests the impact was substantially slower, at 29,000 mph (12.8 km/s). It is believed that about half of the impactor's bulk was vaporized during its descent through the atmosphere. Impact energy has been estimated at about 10 megatons. The meteorite was mostly vaporized upon impact, leaving few remains in the crater

The vaporization of the meteor would create a nice heat blast, and the following impact and debris deposition would wipe out a small city like the Pompeii you refer, without any dramatic large scale effect.

The impact created an inverted stratigraphy, so that the layers immediately exterior to the rim are stacked in the reverse order to which they normally occur; the impact overturned and inverted the layers to a distance of one to two kilometers outward from the crater's edge

If you want to get a clue of what the impact felt like at various distances, you can use one of the many online impact calculators. I usually refer to this

A good starting point is the nuclear bomb that dropped on Hiroshima. The blast was city-sized as opposed to country-sized. It had about $6 \times 10^{13}$ Joules of total energy.$^1$ So we know that's not enough for significant secondary effects.

The second question is about your survivor is more about the shape of the blast. I would imagine the amount of material thrown into the air will be MUCH larger than the city. So "viewing the explosion from the top of a nearby hill" is out of the question. More realistic is "caught on the edge of the blast front." Something like this but on a smaller scale, where a tsunami of dust and soil moves outwards from the impact. Granted our meteor is MUCH smaller. But the survivor is also MUCH closer. (the dinosaurs in the video are on the other side of the planet).

$^1$ Granted only a small portion was directed into the city. I imagine the meteor will be much more efficient if it physically impacts the city. Some energy will be burnt off in the atmosphere but I don't know how much.

Edit: The impact calculator talks about something called an airburst, which is the explosion caused by the meteor smashing into the thickest part of the atmosphere. It seems larger bodies airburst closer to the surface and lost proportionally more of their energy in the burst. That means larger impacts are less focused towards the ground.

As noted, Barringer (Meteor) Crater provides an easily observable benchmark: a 1.2 km crater would be the result of an explosion large enough that you could assume everything within tens of kilometers would be flattened, and right there is even a very large modern city.

For another comparison, Tunguska. The airburst was somewhere between 10 and 30 megatonnes (estimates vary), but flattened roughly 2100 km2 of forest despite exploding at between 5 and 10 km above the surface; that type of overpressure would devastate the majority of urban structures near the center of the explosion. The Castle Bravo test accidentally went into that range, and it vaporized instruments and destroyed bunkers designed to be hit by a nuclear explosion, so you can image what normal civic infrastructure would look like.

Something like the Tunguska event might be suitable. I believe directly under the blast trees were left standing so someone in the city in a deep basement might well have survived https://en.wikipedia.org/wiki/Tunguska_event

You could potentially get away with destroying a larger city with a smaller meteor if you took advantage of a knock on effect from something else being destroyed.

An example of this: A very large dam upstream of the city is destroyed by the meteor, causing a catastrophic flood that washes most of the city away.

Not the answer you're looking for? Browse other questions tagged geology cities asteroids meteor or ask your own question.

11
How big could a city possibly get?
3
What could totally submerge a city without causing too much damage?
1
How big of a city could my volcanic island support?
25
How would skeptics know that a single-engine plane could not destroy a falling meteor?
1
How many meteors can an ecosystem sustain without them causing an irreversible effect?