I'm trying to not delve too into the sciences so as to keep things fairly suitable for a space opera setting, but I'm trying to figure a few things to a reasonable degree of detail.

My question here is; Say you had a large spaceship (anywhere from a capital ship the size of the Galactica, or smaller ships like the Millenium Falcon) Given the large power requirements of both, it's necessary for them to use some large, advanced reactors, possibly multiple. Fusion seems to be a good catch-all for this. However, how would one go about attaining the inital amount of power needed to kick-start the reactor? This is obviously a bigger issue on larger vessels, where the power requirements will be higher.

The ship would have seperate systems to produce power (Main reactor(s)), and to create thrust, which would be seperate engine powerplants, using most likely a different type of fuel. So far my best idea has been to use the engines to kick-start the reactor, assuming the engines don't have a high initial energy investment needed, which most ships most likely would.

Various fusion reactor designs are not intended to be run in a steady state, but rather are pulsed (there are a bunch of reasons for this that I won't go into here, but suffice to say that fusion is hard, and fusion of stuff that requires substantially higher temperatures than D-T is much harder still). For each pulse, you pump a bunch of energy in alongside your fuel, and get a load of energy out, some of which you keep back for the next pulse in some suitable storage medium like an exceedingly fancy capacitor bank.

In order to kickstart one of these things, you need to charge the capacitor bank. Given enough patience, you could probably do this with a hand-crank, but realistically you might use a big solar array or simpler-to-start nuclear reactor like a good old-fashion fission pile if you're too far from the sun to use the easy option.

If your ship has a pulsed fusion rocket (which seems plausible if you want something with a high-efficiency engine with a lot of thrust, which of course you do) it'll work in practically the same way.. charge up the coils of the magnetic nozzle, throw in a fuel pellet and zap it with something suitably energetic, boom, skim off some of the energy from the expanding nuclear fireball to power both the next pulse and the rest of your ship as a combination rocket and reactor. After all, the engines probably require vastly more power than anything else on the ship, and if you're in combat you don't want to have your engines turned off because you'll be a sitting duck. Secondary reactors are just that.

That "zapping" phase of the engine pulse process is where all your up-front energy cost comes from... once you've got the first zap, you get a self-sustaining cycle because the fireball will charge up the capacitors to power the next zap. What you need then is a much, much smaller power source to operate the magnetic nozzle (because if it isn't charged up to full power you're going to blow yourself up), and then you just kick a thermonuclear warhead out of the back of your ship and have it go off in the focus of your magnetic nozzle. Boom, engine kicked to life, gigawatts of power instantly available.

If a space ship has been inactive and un powered for a long time, maybe days, weeks, months, or years, there might be a complicated procedure to start it up.

So possibly a another, even tinier rocket would be used to ignite the second rocket which would be used to ignite the giant solid fuel rocket being tested. But eventually there would be a first rocket, which might be ignited by lighting a long fuse from someplace far enough away to be safe, or by remotely activating a device that made a spark, or by remotely opening a valve causing two substances to mix and spontaneously ignite, or remotely activating a liquid fuel pump, etc.

Presumably a fusion generator would need a lot of electricity to operate.

Maybe some chemical fuel might be burned in oxygen to run a little generator that provides energy to run a fission reactor. Electrically powered machines would move the fission fuel and the control rods, etc. into place and pump the coolant, and presumably steam produced by the reactor would turn a generator which generated many times the electricity that the chemical powered generator did, which could now be turned off as some of the fission produced electricity would be used to run the fission reactor.

Note that fission fuel would gradually decay to non fissionable elements with time, so a fission reactor would become useless for a step in this start up process after a period of time which depends on various factors that atomic energy experts could discuss.

At a spaceport, the energy for the first step in the start up procedure might be provided by the spaceport's power generators. An exploration or war ship would not expect that service to always be available when needed and so would be equipped to start up entirely on its own.

Of course if some adventurer lands at a space port and suspects that he might possibly have to run for his life back to the space ship and take off just a few minutes after landing if things go wrong, the space ship wouldn't be turned off and un powered but left with the engines idling, more or less, so that it might be able to take off and escape almost instantly. 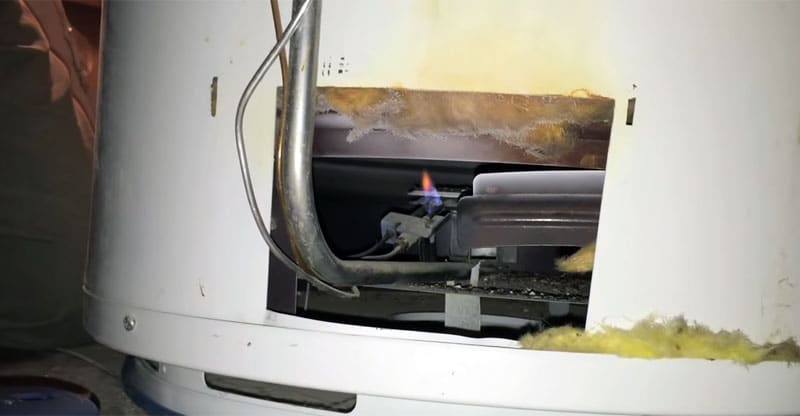 In this future cold fusion reactor, the reaction will continue as long as it is provided fuel. If you need energy, you provide more fuel, and you can ramp it up. If you don't need energy, it powers down. But not to zero.

The analogous situation is a pilot light. A little bit of gas continues to flow and keeps the flame ready. When you need heat from your car appliance, the pilot light is available to light the main burners and ramp up in a hurry.

The "pilot light" equivalent for the reactor is lit at the factory and the reactor is provided already running. The tiny bit of energy it necessarily generates is dispersed as heat. If your ship is unattended for long enough that the fuel for your fission reaction runs out (which would be a long time) it will be a trick getting it started again.

Your fusion reactor would provide all the energy needs of your ship. It would turn a generator to produce electricity for the sound system and (laser) lights. It would superheat water and shoot it out the back for propulsion. Less superheated water would fill the Captains Hot Tub.

Fusion reactors are nice. You could use batteries like superconductor/insulator material (https://www.popularmechanics.com/science/a29813740/new-state-of-matter-cooper-pair-metal/) to start up a small auxiliary reactor that turns on the big stuff. Alternatively you could store some anti-matter in some futuristic passive magnetic container and use that for the first burst of energy.

But why stop there? Storing anti-matter probably takes a lot of energy and the point of your battery is that it doesnt empty itself. The option for a full-scale anti-matter reactor presents itself. But having to run your anti-matter reactor for a decade on low-power just to preserve the rest of the anti-matter isnt the best option. So that leaves one of the more awesome solutions.

A black hole. Never miss a chance to use a black hole. Starting off with a kugelblitz created in a lab (probably at a Dysonswarm) and then fed matter until it's sufficient in size will generate a steady predictable amount of energy on par or higher than fusion reactors for quite literal millennia. Black Holes generate less energy per second the bigger they are (but become easier to feed), so if in dire need of more energy you could have several small Black Holes powering your ships. Fuel is easy to come by as anything that can be accelerated into the Black Hole, even light, can make it grow. When you dont need the energy you can feed it back to the Black Hole in the form of efficient lasers, masers and other forms of radiation or by using a fairly accurate particle accelerator that fires matter into the Black Hole. It needs to be accurate due to how the Black Hole's event horizon is probably smaller than the atoms you are trying to fire into it. The Black Hole also provides its own constant power to keep the Black Hole in place in your reactor. Dont worry about it swallowing your ship, at these sizes it hasn't got the mass to pull much in (its like expecting Mount Everest to have enough gravitational pull that people can feel it). Ofcourse it does mean that if he Black Hole leaves the reactor the power of a nuclear reactor is now blasting through your ship.

Just know that if the Black Hole reaches the end of its lifespan it'll rapidly release enough energy to simulate an atomic bomb explosion. Either feed it or eject it beforehand.

No space magic answer: Antimatter is probably the best place to start, considering it doesn't have a high activation energy. All you need is a magnetic containment system, then meter out enough of it to start a self-sufficient fusion reaction.

Soft sci-fi answer: If you had something that can produce an energy field on the cheap that greatly decreases the activation energy for fusion to occur, you could have cold fusion with no massive energy input to start with. Theoretically, that energy field would disrupt the forces that hold atoms together, so you could easily repurpose a matter disruptor for that.

Not the answer you're looking for? Browse other questions tagged spaceships power-sources .

57
Would a fighter pilot with an invincible space ship be able to conquer the galaxy?
14
What is a good way to estimate the mass of spacecraft?
3
Wireless power generation in a fleet of spaceships
5
How would a large Space battleship be powered?
7
Disabling a spaceship while leaving it repairable?
42
How can a space station prevent docked ships from irradiating each other or the station?
6
How would the bridge command structure of a starship work?
3
How big should I make my space fleets?
3
"Low" Efficiency High Power Fusion drives for weapons and "High Efficiency" lower power drives for ships?