How would oceans of supercritical CO2 on Venus-like exoplanets look like/behave? 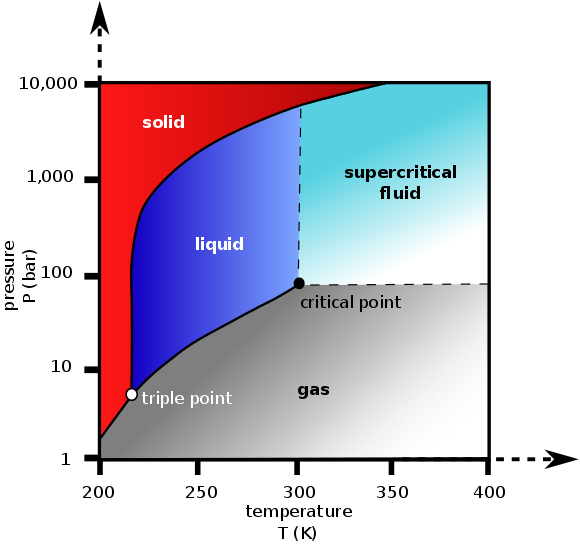 Carbon dioxide turns supercritical above a pressure of 73 atm and 304.25 K (31.10 °C). The surface of Venus fullfils these conditions.

Additionally I found this picture of supercritical CO2.

So is an Exo-Venus with true oceans of supercritical CO2 plausible? How would the ocean look like, visually and chemically? I assume that we would simply need greater pressures to get these oceans. So a super-Earth with more gas and higher gravity seems to be the way to go. Would the oceans and coastlines look weirdly earth-like or would the surface be a bubbling mess of "soap-bubbles"? What other chemicals could be found in these oceans? What does the liquid CO2 solve? Will the oceans be salty? Acidic or basic?

Are supercritical oceans of CO2 possible? That depends on how you define "ocean", but yes. Making them more liquid-like just requires a cooler environment, easily achieved with a Venus-like world that happens to be somewhat farther from its sun than Venus is.

How would it behave? That depends on just exactly how liquid-like it gets. There are two not-very-interesting cases:

The interesting cases occur close to the critical point. The environmental effects of such an environment are explored in Hal Clement's aptly-named novel Close to Critical, although the world of Tenebra in that novel has an atmosocean of supercritical water rather than supercritical CO2. If you can arrange for the mean temperature-pressure curve to pass right through, or very close to, the critical point, then you get:

The problem with supercriticality is that due to the circumstances under which it arises, you lose any clear distinction like "liquid/gas" as you might get at the surface of a conventional ocean. Instead, you get a smooth increase in density and viscosity from the gas phase bits of the atmosphere into the supercritical bits, like a fog that just gets thicker and thicker. If the material in question can exist as a liquid under higher pressure, the smooth transition will continue, getting thicker and more viscous until you eventually end up in something that seems unambiguously liquid. That'll happen with hot, wet superterrestrial worlds, for example, but I don't think you'll get liquid CO2 on venus-like worlds.

You won't, therefore, have "oceans" of supercritical fluid... just banks of thick, foggy "cloud" that rapidly pour and settle into low-lying areas.

As for what it looks like, you tube does have some nice videos of supercritical transitions, such as this one. Watching the transition in process is interesting, but I'll include one possibly relevant screenshot: 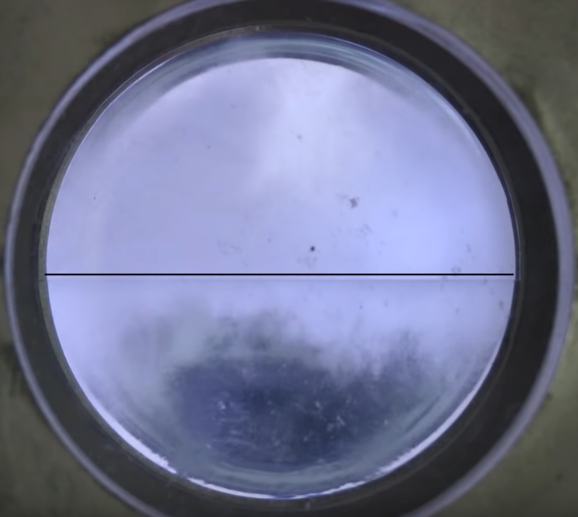 From 1'48" into aforementioned video... this almost shows what I was really hoping for. There's liquid CO2 at the bottom (which is clear and shows some dark material behind it), and (I think) mostly gas-phase at the top (which is also clear, and shows some light material behind it), and the bit inbetween is some opaque and turbulent supercritical CO2. You can see it forms billowing cloud-like feature, both at the air-side and at the liquid side, showing how clear boundaries can easily disappear in this sort of situation.

So is an Exo-Venus with true oceans of supercritical CO2 plausible?

Maybe? We don't really know a whole lot about planet formation, after all.

Boring, cloudy and grey. And it wouldn't be an ocean, more of a fog bank.

What does that mean? Like, the stuff dissolved in it? Presumably very vertically stratified, but other than that it could be all sorts of stuff. Too broad to answer here, really.

Would the oceans and coastlines look weirdly earth-like or would the surface be a bubbling mess of "soap-bubbles"?

Long term exposure to supercritical CO2 might be capable of causing surface erosion, as you'll still get equivalents of wind and waves in it. No massive destructive mechanical wave action (the density transitions are too smooth for that), but slow sedimentation under gravity and rippled landforms due to "wind"/"current" movement. Coastlines would seem likely to be smooth, with only fresh volcanic landforms or astroblemes showing sharp, complex shapes. I'm not sure that rain is likely to occur, so you probably wouldn't see classic drainage-basin type landforms, so mountain ranges upthrust by tectonic activity could have a very different set of shapes to terrestrial landforms, assuming that "ice" couldn't form on their peaks.

What other chemicals could be found in these oceans? What does the liquid CO2 solve? Will the oceans be salty? Acidic or basic?

You seem have segued from supercitical to liquid, there. If you meant "supercritical", I'll point you straight back to the wikipedia page you started from. It has stuff to say about its use as a solvent. I think the overall pH seems likely to be neutral. I'm not at all sure if a supercritical solvent could be saline... it seems possible. The upper transitional layers would presumably not have much in the way of dissolved chemicals in them, but the deeper you go the more you'd find.

Not the answer you're looking for? Browse other questions tagged science-based planets xenobiology chemistry .

7
Is it possible to use Venus' temperature to generate electricity, and how would the electricity be transferred to Earth?
0
Venus--Is She Destined to be Hell?
11
Is life required for a world to be habitable for humans?
24
What effect would liquid sulfur oceans, sulfur dioxide in the atmosphere have on visibility, sound propagation and other environmental information?
3
Would an atmosphere of supercritical CO2 affect available light?
6
How long would an array of mass drivers take to terraform Mars by transporting CO2 from Venus?
4
How does composition change if you extend an Earthlike atmosphere 50km below sea level?
3
Can a water world be turned into a dryer habitable planet by an early runaway greenhouse effect?
2
How to make humans compatible with a high pressure CO2 atmosphere?
2
What size/distance a planet should be from its star to have a dense atmosphere and not become a gas giant?