First these are ground effect vehicles, not true aircraft. While Star Trek, Star Wars, Blade Runner, The Jetsons, and every scifi I can think of has "magically hovering" private transportation, I am trying to design a more reality-based highway system for the flying cars in my near future. Click here for a video of the cars I designed during a typical flight. This is not urban traffic, it's a highway system which simply expands the suburban area around a business center, like the American Interstate system. Even with the average car boasting 800 BHP the LH2 economy lacks the energy density to give everyone their own personal aircraft, so I can't use the vertical lane separation which may otherwise be ideal, however canals, open water, and grassy fairways replace paved roads and the great efficiency gains of ground effect flight bring more remote areas closer to population centers.

Basically your route is continuous and cars never really need to stop before their exit. The speed limit is 160 kph / 100 mph.

In the way that we occasionally punch the accelerator and inefficiently launch into the oncoming lane to pass a slower vehicle, My vehicles enter free space at intersections for brief periods. 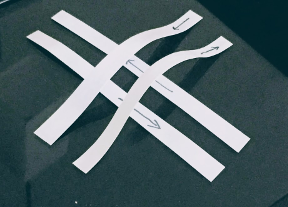 Now, there is a complete civil engineering task to fully design traffic flow in this scenario but I'm focusing now on lane separation given only real-world aerodynamic forces are maneuvering the vehicles. Here is the jist of the how highway system works:

(These pictures are concept art for reference, not a final design)

I do expect the vehicles to still be "road legal", meaning they are no more than 8 feet wide on ground, 10 feet max with extensible wings. They have very basic wheels which can brake and provide neighborhood propulsion.

While this mode eliminates hazards of poor traction from ice, snow, sand, or rain, it adds wind hazards.

Today US road lanes are officially exactly 11 feet wide, for a maximum legal vehicle width of 8 feet. If I were to visualize traffic in this type of highway, what would be the normal lane separation? How close are we to oncoming traffic, and passing traffic?

Vehicle performance will be much like the vehicle in this patent, however thrust and yaw can be used to decelerate the car at 0.6g on the road, but not at all in free flight where obstacles need to be handled as a plane would.

Items outside the scope of the question

I am only looking at lane separation for this specific road. As I describe driving on this highway in the story, what does it look like? The following other related engineering problems will be handled elsewhere:

Something that might be a useful reference is to consider military helicopter separation distance. Because they regularly fly together very close to the ground in dangerous environments, it could give a baseline as to safety. While military pilots like this are certainly better trained than the average driver, you could argue that automation and augmented reality factors probably counter this enough.

What I found, for the example of attack and reconnaissance helicopters, was a distance range of 3-5 rotor distances for close formation and a stagger distance of 150 meters(500 ft). While your craft obviously don't have rotors, you could consider their width as a reasonable enough substitute. This would give a minimum distance of at least 9 meters(30 ft) and a safer distance of around 15 meters(50 ft). Lanes would then be between 12 meters(40 ft)and 18 meters(60 ft) wide(adding the size of the vehicle and giving half the separation distance on each side).

I'm also concurring with the dissenting opinions that this would never work for all of the reasons indicated, but hopefully this helps regardless.

Also, those jumping intersections look suicidal. What happens when the automated system loses power. While traffic light failures are a major annoyance and lead to significant delays, they don't lead to guaranteed pileups at 100 mph.

You're all going to die

There's a saying that applies to GEVs/WIGs as much as it does to hovercraft. If you can see something in front of you you're going to hit it. GEVs are not suitable for traffic situations, as they require a minimum speed rather than a maximum. They're not really suitable for use over land due to the fact they corner like aircraft and as such the inside 'wing' often hits the water. In the case of being over land the inside wing hits the ground and results in something referred to as 'a crash' apparently this is 'bad'.

Basically the way you've designed your transport system, if there's anything resembling traffic at an intersection, everybody dies.

But in terms of your actual questions, we come back to that old, "if you can see it you're going to hit it" problem. Without ground traction you don't have precise maneuvering, without precise maneuvering you must have really wide lanes and be a very long way from oncoming traffic. Possibly in the range of hundreds of meters.

You have no brakes. You have terrible steering. We could consider this equivalent to an icy road and take the 8 second guidelines for safe distances. However the level of automation added to these vehicles means I'd suggest 4 second following distance, 2 second lane width and 2 second vertical distance. For oncoming I'd suggest 4 seconds each way to collision point.

Option 2 is to not allow personal flying transport before full automation.

It isn't going to work.

Aircraft horizontal separation standards vary based on type of flying (uncontrolled, controlled, VFR, IFR, etc), but is generally measured in miles, not feet. For example, US ATC standards in a terminal area specify a minimum 3 nautical mile separation. Even at Oshkosh during the fly-in they maintain separations of 1/2 mile for airplanes landing on the same runway.

In open airspace, separation requirements can be as high as five miles.

One of the main reasons for these large separations is that aircraft cannot manoever like ground craft, not being connected to a high friction surface. If a vehicle breaks down or suddenly stops in front of you, you're going to need a lot more than 70m to stop if you are cruising at freeway speeds.

The other reason is that the air mass you are flying through is not steady, and the lift of the vehicle in front of you is going to throw off a lot of turbulence.

I know you hand-waved some kind of wind-change alert system, but that's not going to cut it. It comes down to a simple matter of energy - it would be extremely hard to constantly counteract changing winds and turbulence in a way that kept your vehicle in a narrow 'lane'. Even large jets can drop hundreds of feet in wind shear, and it doesn't take much crosswind to make them hard to land.

The logistical problems of many airborne craft trying to stay in densely packed lanes are immense. Which is why we don't have flying cars now, and never will have them in large numbers over any city. Keeping them in ground effect doesn't help and probably hurts, because it keeps those floating vehicles close to many obstacles.

Why do you need this? If they can't stack vertically, just what are you gaining with ground effect vehicles? Certainly not energy efficiency, as these vehicles have to expend power just to keep them off the ground. Small hovercraft are lucky to get 5-10 mpg.

The only reason I can see for it is if somehow the ground can't be used. Otherwise, tires are better.

If all the practical issues are dealt with as you say, I see no reason 'lane widths' would then emulate existing ones, however this is a missed opportunity

One of the major complexities in modern day city / traffic / urban planning is that the 2 dimensional plane, the ground plane, contains:

So there is a fair degree of complexity in laying this all out - without an overlay of free traffic over the top hovering just above the ground plane. Removal of transport from the ground plane will in some ways make things easier, and in others more challenging.

Lane width is perhaps one of the minor issues, but sure 3.5m is standard (in Australia anyway). The restrictive intersections you mention may perhaps also be a lost opportunity to get much more height, and make use of a true 3-dimensional city.

Privacy, security and practicality with regards to the above functions would be another question - but perhaps a great one to ask!

Not the answer you're looking for? Browse other questions tagged engineering flying-machines augmented-reality .

18
Airship defence against pack of flying creatures
10
Can Zeppelins and Blimps replace cars in the future?
6
Flying commercial airliners with ground power?
6
How would you design Turn-Signals on a Flying Car?
9
Why do flying saucers have to spin while flying?
32
How could a 6-way, zero-G, space constrained, 3D, flying car intersection work?
3
Is it possible to create a small aircraft drawn by flying creatures?
23
Are "bicycles" for flying species possible?
3
Sail Plan For A Flying Vessel