I'm fairly certain such a creature is impossible, but I was curious to see if anyone could come up with an explanation for such a creature. How would a two-headed giant evolve/function if it was a real creature? 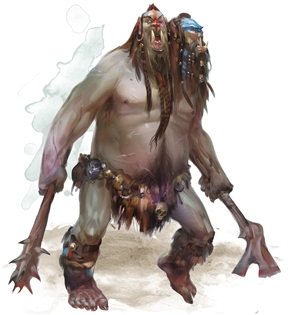 Two-headed creatures - or even humans - are not unknown in reality, and have even been known to survive to adulthood, so as a point mutation it is not beyond the bounds of possibility for it to occur over a very short period relative to the typical evolutionary timescale.

In order for this condition to persist across generations, there are several pre-requisite conditions that must be met:

The disadvantage that having two heads appears to pose is that the two heads each have their own consciousness, and they are each in control of only half of the shared body, and they may disagree on a course of action.

However, these are not insoluble problems. The Ettin pictured has only two arms, while each of the two brains would most likely still be adapted to having sole control over an entire bipedal two-armed body, not just half of one. It is entirely reasonable to assume that there is overlap along the creature's centre-line where the respective neurologies of the two heads overlap, and given the huge areas of each head's cerebral cortex that have no direct, overt functionality in a bicephalic creature, it is easy to conceive that the intermeshing of motor and sensory neurons between the two halves of the creature could become adapted to providing a communication bridge between the heads.

Such a communication bridge would not be as fast or have as high a bandwidth as the corpus callosum, but it could quite easily provide higher bandwidth than mere verbal communication. It would not be able to make the bicephalic body have a singular consciousness in the manner that the corpus callosum allows the two halves of the human brain to function as one, but it would be able to provide sufficient co-ordination that - with practise - the creature could move as well as a monocephalic individual.

Of course, this compensation for the disadvantages of having two heads doesn't address the potential advantages. What might the adavantages be? Some of this depends upon the social culture of the Ettins as much as their biology, but social advantage is just as good as a physical advantage in evolutionary terms. So:

First, there's no particular reason that the brain needs to be located in the head. Such a creature could have a single brain located in the body cavity, in which case the 'heads' would be little more than sensory extensions, allowing it to see, speak, and smell in different directions simultaneously. The heads would appear to act independently in the same way that human hands sometimes do, but would actually be coordinated by a single mind.

If the condition is that each head has its own, independent, self-conscious brain, however... I suppose it's technically feasible. The autonomic and parasympathetic systems would need a junction box somewhere at the base of the neck — possibly an in-common medulla oblongata detached from either brain — with higher cognitive functions located in each head. I cannot think of an evolutionary advantage to that setup, and each head would block the other's peripheral vision and hearing, creating problems, so I can't see that as viable. I could see it as a temporary condition — if, perhaps, the ettin reproduced by bilateral fission, and the 'double-headed' stage was its equivalent of being pregnant — but that would raise a host of other questions.

46
Is there an evolutionary advantage to having two heads?