Is it possible to make a stable planetary system like this, and what would the orbits have to be?

I have a K-type star (0.5 stellar masses) as the central body, and the planets are as follows (those I want to be in the habitable zone in bold):

I: An uninhabitable rocky inner planet 50% the mass of Mercury. Way too hot for life but not enough for automated equipment and bases. Tidally locked.

II: Then further away just on the inner edge of the habitable zone, a hot tidally locked planet that redistributes some of its heat through its atmosphere and has a huge pangea like desert continent facing the star. Life similar to that on a primitive Earth can persist here but flowers most around the terminator line. About 75% Earth mass.

III: A planet about 25% more massive than Mars. Not tidally locked to the star, as with other planets beyond this point. Has an exotic atmosphere with primitive intelligent adapted to the environment. A generally temperate climate with many more island land masses than on Earth.

IV: Almost the twin of Earth, with 90% of its mass. Intelligent space faring life.

VI: Another Earth like planet very similar to planet IV. The species on this planet consider planet IV to be their twin world, and they are often in alliances with IV against the super-Earth in the middle orbit. On the edge of the habitable zone, so cooler than the proceeding planets but kept warmer by its atmosphere.

VII: A gas giant around the mass of Jupiter. Beyond the conventional habitable zone and out of the way of disturbing the other planets but not so far out that effects like atmosphere and tidal heating can't give its moons enough energy to have liquid water. It has two habitable moons each a little larger than Mars among with much smaller rocky moons. These two moons tidally pull on each other a little creating liveable conditions for primitive life, but probably not stable in the long run.

VIIb: The gas giant has an asteroid field co-orbiting in one of the lagrange points and in the other an ice ball around 75% of Earth with a very small rocky moon. Planet is typically around as cold as Antarctica across the planet, with a greenhouse effect from a relatively thick atmosphere keeping it from being any colder.

... So that's the setup I'm looking at. I have the important information about the masses of the planets, but is it plausible to have this system be stable for a long time, allowing for the distance of the gas giant to accommodate not disturbing the other planets that would be in some strict orbital resonance with each other?

I finally used Gravity Simulator, and I found out that the Jupiter mass planet couldn't be placed close enough, so I made some alterations. I omitted the Mercury (which doesn't change much I think), and I altered the gas giant to be a 75 Earth mass Saturnian planet and placed it at 1.75AU, beyond the HZ for this system, but I guess it's possible the two moons I gave it could still be habitable through tidal heating and thick atmospheres: 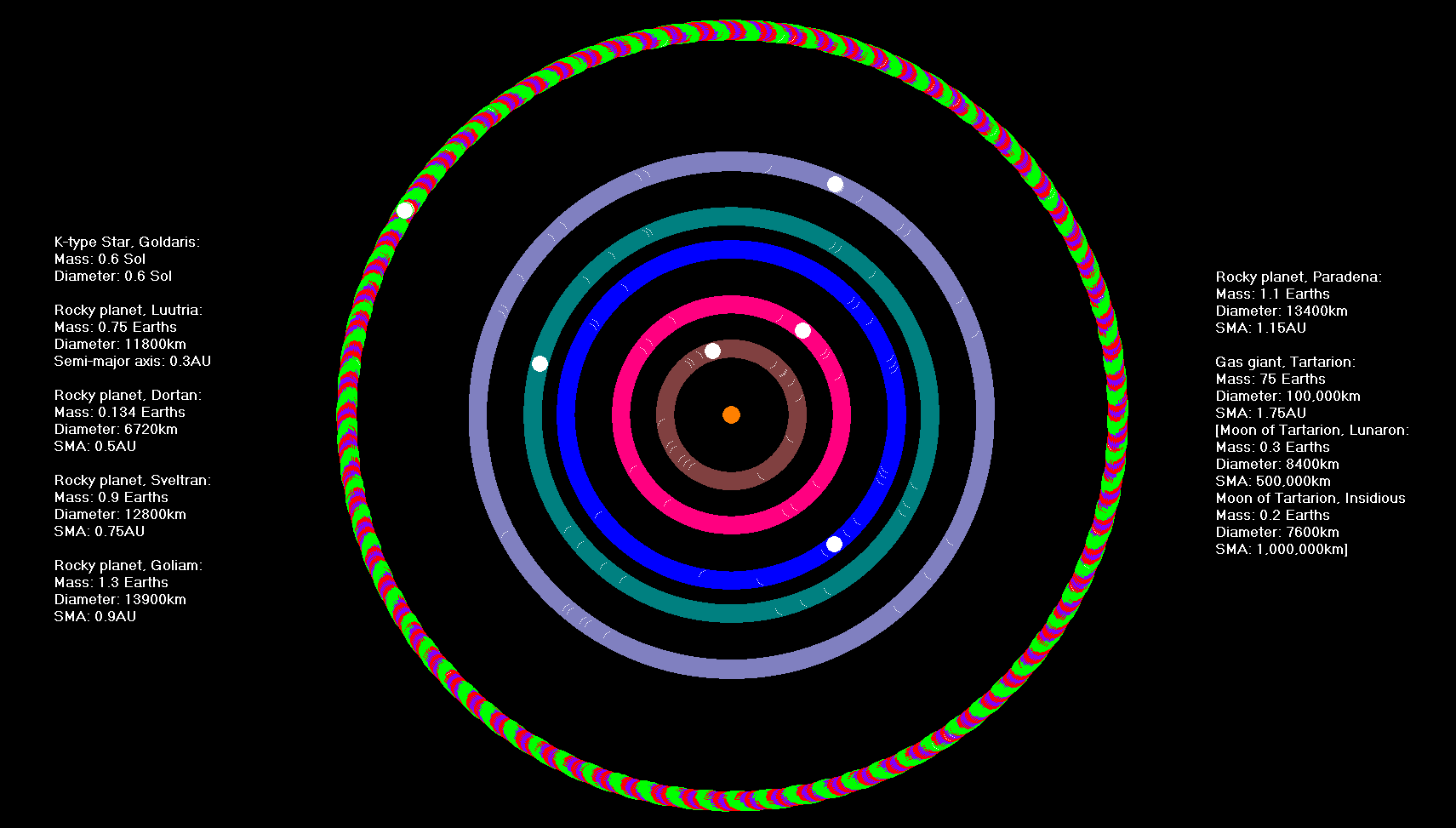 I then tried to add the co-orbital/trojan planet, and it turns out to also be stable, except it must interfere with the hill sphere of the gas giant, because it causes the gas giant's moons to be ejected. So you can have co-orbitals or you can have moons it looks like.

Not the answer you're looking for? Browse other questions tagged planets solar-system .

23
Realistic sky of an Earth-like moon orbiting a gas giant (length of day and size of celestial bodies)
2
Conditions for human life in a Jupiter-like system
13
Can two stars orbit each other but each have their own planets in stable orbits?
46
Can a planet be tidally unlocked?
6
What does and doesn't work with this planetary system around a red dwarf?
3
How long to become a habitable planet
6
What conditions to make this habitable moon plausible?
3
Is my binary planet realistic?
2
Does this F-star solar system make sense?