Plausible ways for the alien species to be able to impregnate every and any species?

In many movies, alien species often have the ability to impregnate "every and any" species and have their mutant offspring.

I have a story setup where some, not so conscientious, scientists decide to make that happen, for whatever reasons.

But I wish to explain "how it worked", what's the biology mechanic behind it that make such thing "plausible"!?

Because in real world, crossbreeding often failed. Even if they do succeed, they often produce an infertile offspring.

What possible ways for the alien species to "guarantee" a success and produce, preferably fertile, offspring!?

Your species reproduces by attaching to any sperm and/or egg cells, but doing so like a virus which lays dormant in a lysogenic cycle.

Diseases like chickenpox/shingles can lay dormant for years - decades even - by simply replicating in the lysogenic cycle. Eventually it can be "activated" - meaning the viral DNA in all the replicated cells start reproducing in the lytic cycle, consuming the host cells. Basically, it's the stuff of nightmares.

So your originating alien species doesn't reproduce by implanting sperm or eggs; it injects "venom" (a virus) into any living species. The "venom" finds and attaches to the host sperm or eggs. The species then goes on and reproduces normally, but the viral DNA exists not only in the parent, but in the child as well, thereby creating a type of hybrid. The dormant virus either (a) includes the genetic information of the host species (looks, features, etc), or (b) becomes "activated" - not by destroying the child DNA but by "taking over" the chromosomal features.

To better understand this process, look at this image from wikipedia: 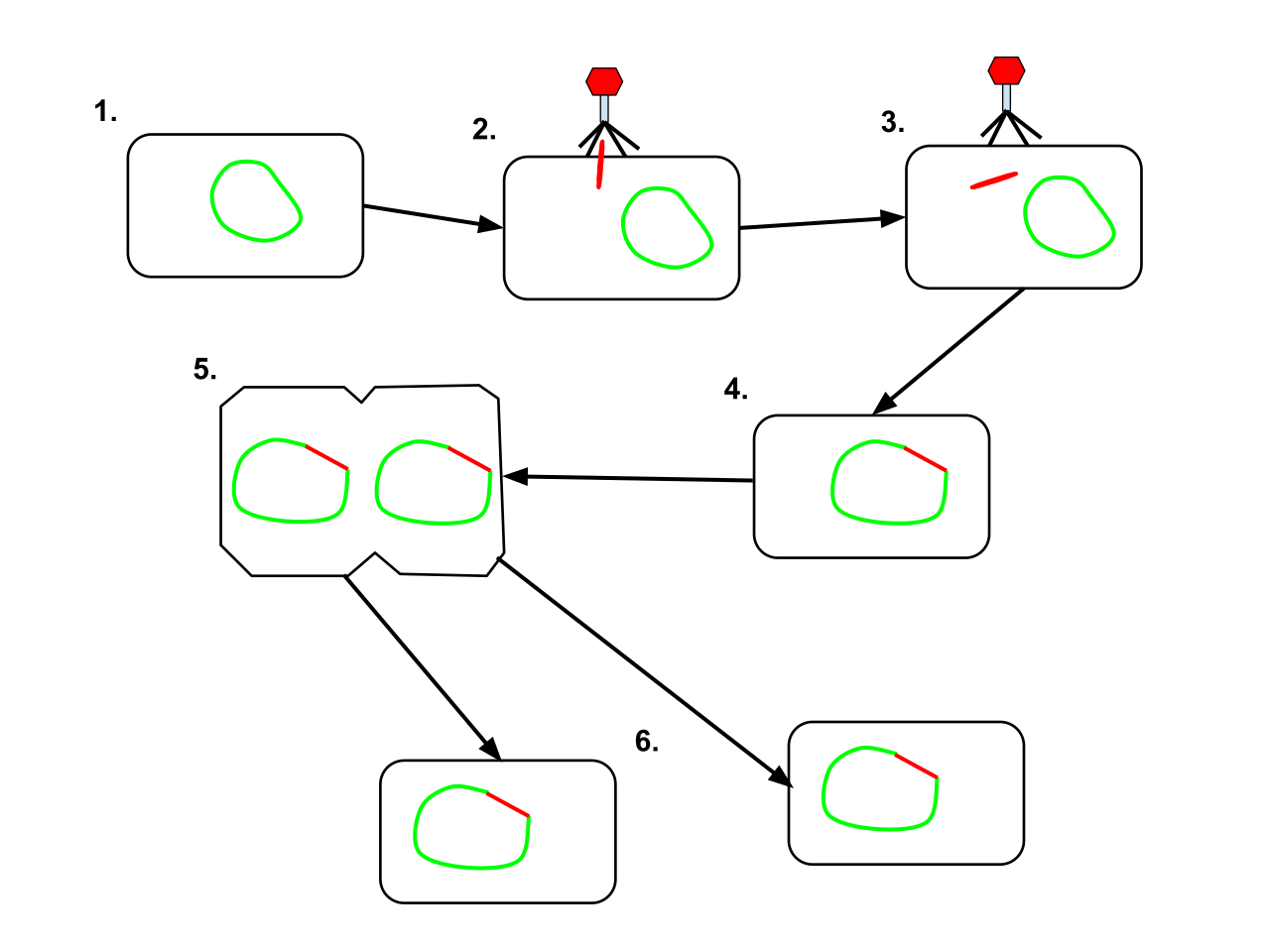 This would allow the host DNA to match up on different chromosomal layouts - perhaps including plants. There's some hand-waiving here, as there are no real-world examples of viruses which attach to sperm/egg cells in this way, but the concept of this type of virus is very well studied (again: chickenpox/shingles), so it's "plausible" in that sense.

If you're talking about combining DNA to produce viable offspring - not a chance.

I've already gone over this in a similar question, so I'll just copy that part to here.

The problem with this is that even if there is a mechanism for combining DNA arbitrarily, you can't plug bits of DNA into another species with a different evolutionary path and expect to come up with something meaningful. Even supposing they happen to look like humans, they will be completely different on a chemical level. They will probably not be able to produce proteins from our DNA, and if they can, said proteins will most likely be either useless or toxic.

The reason why mating makes sense biologically is because you're combining your DNA with that of another organism whose genes are close enough to your own that the child will be able to benefit from those good (or at least viable) genes. Here, the child will not benefit from the fact that the other species has good (or at least viable) genes, so what's the point? You could say it's just randomly mutating to prevent the child from being a clone, but in that case you might as well just randomly mix up DNA and hope something comes of it, saving the tedious difficulty of mating.

Some bacteria do swap genes randomly with bacteria of other "species", but this only makes sense because #1 bacteria are much more structurally simple than multicellular organisms and therefore producing a new protein has a much lower chance of simply killing them and a fairly decent chance of providing some benefit, and #2 bacteria reproduce so fast that they can afford to take these risks.

All this is without even getting into the issues of the species being alien. They might not even have DNA.

Now of course since these organisms are both alien and artificial you could say that they have a completely different chemistry. Maybe they even have "smart" DNA that is somehow able to analyze the DNA of its partner and pick out bits that might be useful. But this is getting into realms of bio-engineering so far beyond feasible speculation that it might as well be magic. Not that there's anything wrong with that.

Forget about making an interspecies impregnator. Instead, try and figure out how to make an interspecies parasite - a creature that injects its own offspring into the host, which develops and (somehow) acquires traits of its host. Basically, you want a Xenomorph.

Of course, the Xenomorph is also completely implausible. Endoparasites are, by nature, incredibly specific to their hosts. They need to feed off of exactly what the host is providing and fight off all of the host's defense mechanisms, which will be different for every species. And that's just on Earth, where most organisms share similar biochemistry, since they all come from a common ancestor. On other planets, even this is unlikely. Aliens probably wouldn't even be able to eat us and gain nutrients from it, let alone impregnate us.

But since the species is engineered, we can bend the rules a little. Let's say this is a species that can take any complex molecule, break it down, and construct its body atom-by-atom. (This means it should be able to "eat" anything with the right elements in it.) It will probably need energy to accomplish this, so let's say the parasitic embryo is injected with a high-energy "yolk" that it actually feeds on, using the host's body for mass alone. It also must be incredibly hardy to avoid being broken down by the host's immune system.

Now comes the even harder part - assimilating the host's traits. Analysis of DNA or biochemistry won't work, since the host is completely alien on a chemical level. Instead, the parasite must analyze its host on a physical level. Perhaps it produces a swarm of tiny blood parasites that swim through the body, collecting information, and then bring it back to the main body. The main body must also possess a knowledgable brain - perhaps the parent passes on actual pieces of its brain, unlike Earth animals that grow from a single cell. (This also means that the child will have some of its father's "knowledge" when it is born.)

The parasite must then take that information and use it to construct its body consciously, creating something similar to the host. It then must figure out how best to exit the host without causing harm (unless it doesn't care about this).

No, this is not plausible at all. But it might be able to help you produce something that sounds almost possible.

It really depends on how alien that "every and any" alien species may be.

If they all depend on DNA for genetic information, it becomes more plausible (if still unlikely). This could even be extended DNA with five bases or more rather than the four we see on Earth. Then, feasibly, the impregnating alien could place an 'egg' of a sort inside the host creature, and the egg then siphons off DNA from the host and combines it with its own. This would have to happen in some kind of structured fashion, or you would get gibberish. Maybe only certain impregnator genes can be replaced with host genes.

More complicated, the 'egg' could be a creature of its own with enough intelligence of a sort to be able to analyze the host's DNA and decide what parts need to be overwritten/combined to create a hybrid. Maybe mainly genes that express general morphology are taken from the host, while deeper functions all depend on impregnator genes. Possibly, the imprenator's vital organs can all be placed more or less anywhere inside the morphology of a host body.

Without a common genetic molecule, I really can't see how it could happen. At best (or worst) I could see an alien parasite using a host body as a structure to grow into, slowly transforming that body into a hybrid - sort of like how hermit crabs take over mollusc shells. The result wouldn't be an offspring per se, though.

I wouldn't call it hard science, but this could be one possible approach, depending on what you mean by "impregnate".

16
Can a reproductive system that allows interspecies breeding be made believable?
2
Could a species be able to be impregnated by anything?

18
Plausible sounds for a species without cheeks
4
My generation ship aliens: Nocturnal and Diurnal plausible in same species?
4
Could the males of a primarily monogamous alien species have antlers?
8
Why might the vast majority of my alien species be incredibly kind and compassionate?
2
Species where every individual looks the same
8
Is there any plausible in-between of Endotherms and Ectotherms?