Is the Hammer's Slammers Powergun feasible?

I have seen many people discuss in this community on how a plasma gun ought to be made. But only a few mention the Powergun from the Hammerverse. 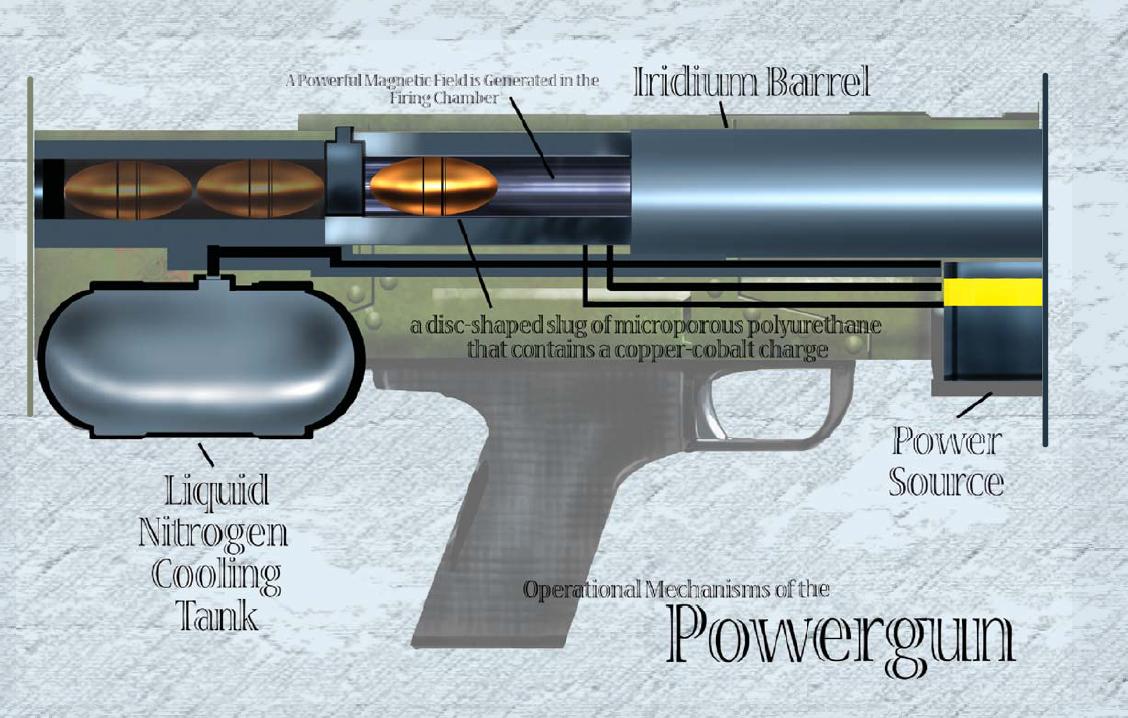 I ask if this design will work. Can the bullets be this easily ionized to form plasma? How are the plasma bullets propelled?

If the technology is still salvageable, albeit with the need for improvements, feel free to say what should be done to make it fully work.

I also understand that some do not believe that plasma weapons can fit in a handgun. Please note that in the Hammerverse, they can come in bigger sizes.

The "copper-cobalt charge" depends on a completely fictional phenomenon that converts those elements directly to energy. The mechanism was described in The Tank Lords:

Weygand determined that metallic atoms of a fixed magnetic orientation could be converted directly into energy by the proper combination of heat, pressure, and intersecting magnetic fields. Old lava locks its rich metallic burden in a pattern dictated by the magnetic ambiance at the time the flow cools. At Pelee in 1902, the heavy Gauss loads of the new eruption made a chance alignment with the restressed lava of the crater's rim. Matter flashed into energy in a line dictated by the intersection, ripping other atoms free of the basalt matrix and converting them in turn. Below in St. Pierre, humans burned.

In reality, that eruption was driven entirely by normal volcanic forces, not a spontaneous matter annihilation reaction. A wafer of copper and cobalt impregnated polyurethane isn't going to do anything interesting, and there's nothing else to salvage here.

It's pure handwavium... but it's not completely absurd.

As noted in Christopher's answer, powerguns work via a hand-wavium reaction that generates plasma from a specially formed matrix of "stuff" (that probably qualifies as a metamaterial).

Now... we've known how to achieve partial matter to energy conversion since at least World War II. We know there are instances where a very particular application of pressure to a specially prepared physical system will result in the release of massive amounts of energy. Now, Drake's process is completely invented, of course, but it's not completely inconceivable that such a process might actually exist; he's just proposing a system not entirely unlike one that does exist, only a lot smaller.

If we take that system as an axiom, the rest seems at least somewhat plausible. Obviously, a weapon using a repeating version of this is going to need to handle a lot of energy, hence the iridium barrels (which IIRC are stated to wear out and need replacing frequently) and liquid nitrogen cooling system.

The other huge caveat is how the plasma beam maintains cohesion. Probably you need to generate a vortex with the plasma, or a long range magnetic field, or both. Again, this can be hand-waved by the metamaterial nature of the charges. This would suggest that duds might have the possibility to "bloom" excessively. (Because the barrel provides some focusing ability, it probably won't backfire so badly as to kill the firer. Usually.)

Now let's look at some of your specific questions:

Can the bullets be this easily ionized to form plasma?

First, as noted, the charges are disks, not bullets. There are no bullets involved. Per above, the plausibility of this is pure hand-wavium, but as fictional physics go, it could be a lot worse.

A powergun charge is essentially a miniature nuclear bomb, probably of significant complexity. Accordingly, it's likely much harder to manufactures the charges for powerguns than the guns themselves.

The function of the charge is to be a very precise arrangement of materials such that a relatively simple action sets off a chain of events that results in at least part of the charge flashing into plasma. If it's been made right, setting it off is relatively easy, but making the charge in the first place is probably on par with manufacturing microprocessors, or worse.

How are the plasma bullets propelled?

There are no bullets. When the powergun's charge is "activated" (fired), it generates a bunch of plasma. Because this plasma was previously in a cool, solid state, it wants to expand really fast, and since it is confined by the barrel, this expansion is directed out the muzzle of the weapon. This is the same principle as when gunpowder explodes to propel the bullet in a conventional firearm, only in this case, the plasma itself is the "projectile".

I also understand that some do not believe that plasma weapons can fit in a handgun.

Conventionally, this is a reasonable attitude; you usually need a big honking power supply. Drake gets around this by postulating that the energy generation can happen via the charges, with the actual weapon being relatively simplistic. Again, see my analogy that the charges are essentially miniaturized nukes. In particular, they work on the same principles of one-time matter-to-energy conversion. Thus, a big power supply is not needed; all but the tiny initiation energy comes from the charge.

This isn't entirely unreasonable, as it is essentially how conventional modern firearms work; the gun is just a barrel and firing pin, while all the "interesting" stuff is built into the cartridge. (Okay, the ammunition feed mechanisms can be complicated also.)

It's worth noting that Drake never mentions how much energy goes into manufacturing a powergun charge. One way you could adapt Drake's basic idea is to invent whatever hand-wavium you like to say that charges are some sort of meta-stable arrangement of "canned energy". IOW, you feed a whole bunch of energy into some process which spits out something about the size of a bottlecap, which, when "jostled" in the appropriate manner, releases all that input energy very quickly; basically, a "hyper-capacitor".

You need a complete redesign, but a weapon firing plasma 'bullets' is feasible and was built (albeit on a larger scale) by the US military in the 90s. It also had one of my favourite acronyms: Magnetically accelerated ring to achieve ultrahigh directed energy and radiation for MARAUDER.

The secret is forming the plasma into a vortex ring, essentially like a smoke ring which can be fired at very high speed magnetically -- an eye-popping 10,000 km/s

Not the answer you're looking for? Browse other questions tagged science-based weapons hard-science or ask your own question.

13
How can you make a stable configuration including a moon that has a moon?
2
Creating a steampunk-esque/cybernetic “Big Iron” revolver
9
Can biological material be magnetic?
5
Multi staged relativistic projectile usable in hard sci-fi space combat
58
Does a grenade kill you the same way a gun does?
9
Can a firearm stay functional in a hidden cache in a jungle in Vietnam or in Siberia for 700 years?
7
Is my plasma weapon design any good?
5
Making a Plasma Gun that works
5
Can Magic Enhance the use of 19th Century Firearms?