Why would a creature only have feathers on its back?

I have a new creature from my complex remembered dreams. It's skin color is a dark color similar to the skin of a Silkie chicken. The thing I saw in the dream also has white feathers. 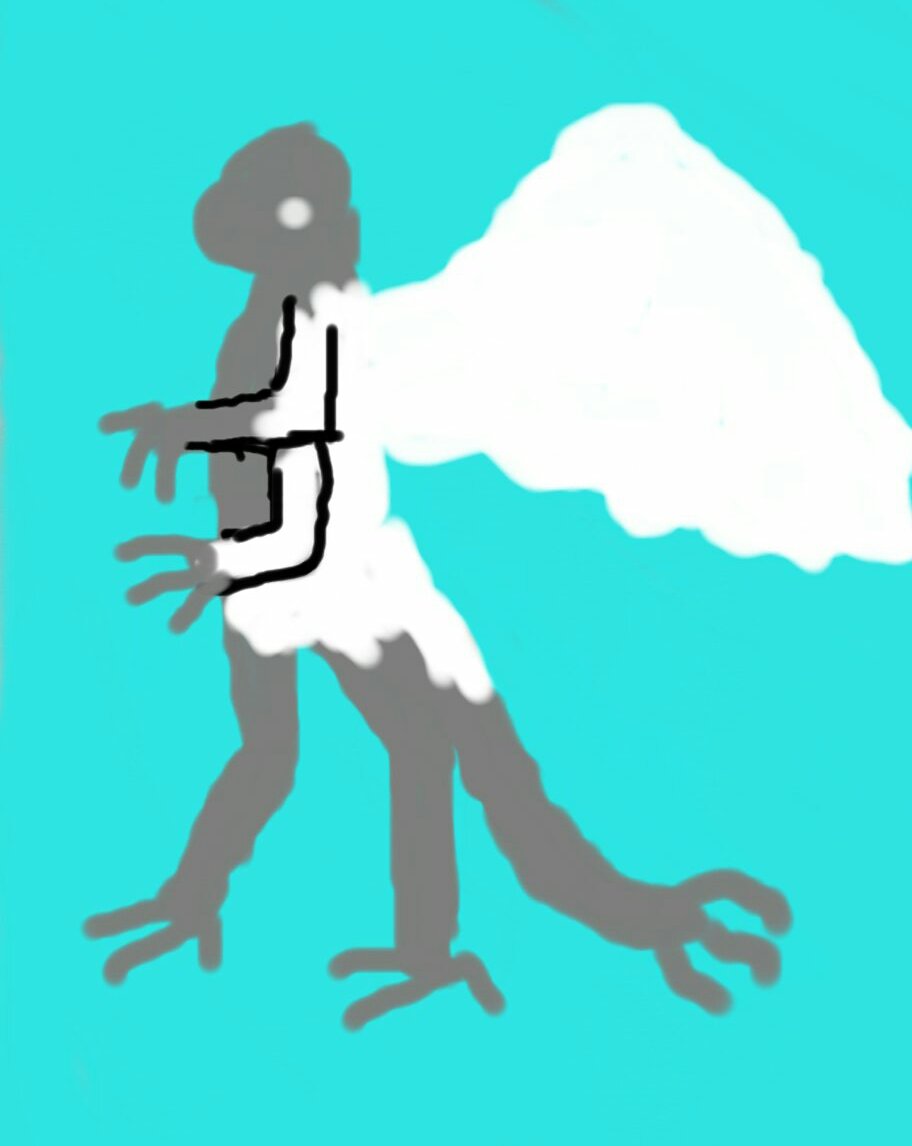 Simplified side view. Gray=skin. White=feathers. Has four arms, four legs, and tail with clawed hand. Two wings. Has feather bits on head to protect ears like a bird has.

I'm wondering if a creature would have a reason to have feather covering only on its back area. Sun protection would probably be redundant since it has dark skin.

Even if the feathers may not solve a physical purpose, There could be some reasons for their existence like:

A peacock has those bright beautiful feathers as a tail, they don't serve much of a purpose other than the real purpose, that is attracting a female. Almost all birds use their feathers to attract a potential mate. Your creature may use these feathers to attract females, additionally, if the feathers can rise at the creatures will it will add to its beauty.

Just like any animal's instinct, if you can make yourself look bigger, you can easily threaten others, including predators, enemies of the same or different species.

Though it may seem absurd and useless, the color and/or size of its feather can show what is the individual's state of health and relative age. A young can have pale feathers, an adult will have bright colors and an old will have faded colors. similarly in case of health.

Just had a very exciting idea, what if the female lays the eggs, on the feathers of the male, making it a sort of nest, and even after hatching the babies stick to the feathers.

The movements of these feathers may act as a possible medium of communication between these creatures, not too complex like a Morse code, but something better than a dog wagging its tail.

There's evidence that feathers are an ancestral trait to dinosaurs, and that while people are used to the idea of theropods being feathered, they might have been more widespread, with the possibility that some species, especially larger ones, were mostly featherless but might have retained some feathers for display. On a quadruped, the logical place for that would be along the back.

So some dinosaurs might have had what you imagine. And in any event, there's no reason necessary other than display to explain why.

This feathered area serves as a nest for a species that maintains a mutualistic relationship with your creature.

If the two species maintain a mutually beneficial relationship, it would be logical for the larger of the two to conserve their feathers to provide a safe environment for the smaller of the two. Take a look at the Oxpecker and Hippopotamus: 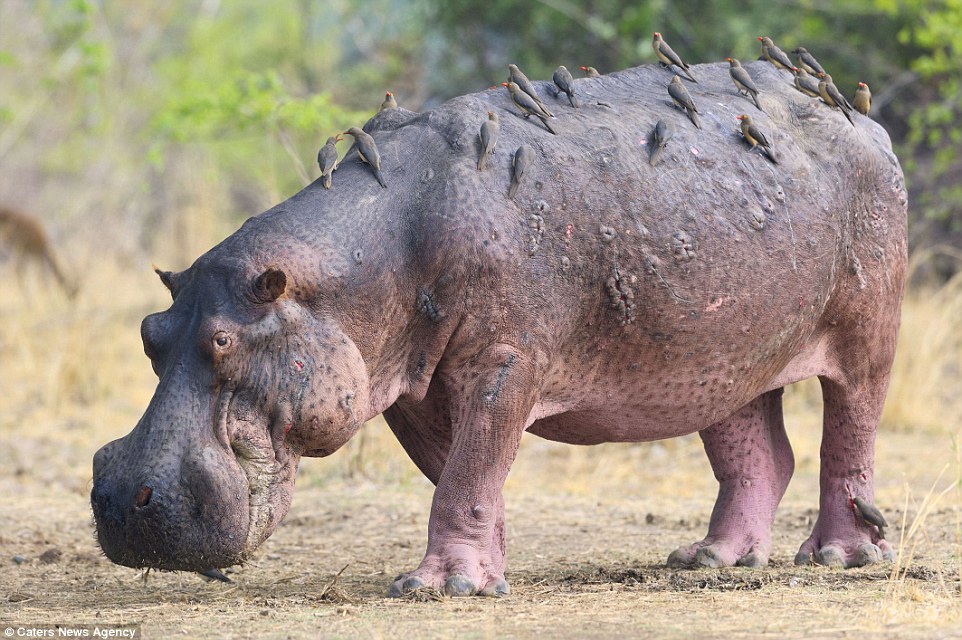 In this situation, the Oxpecker helps the Hippo by eating the ticks that bite into the Hippo's skin. You could easily imagine some form of skin parasite that infests your large, feathered creature, and a handy mutualistic relationship with some local birds, or even squirrel-like rodents, could help explain this specific featheredness (if that's a word).

Because Feathers on their bodies is Selectively Unfit

Contrary to some early theories about evolution, there is no such thing as "Use it or lose it". As far as speciation goes, you only gain what makes you more fit and loose what makes you less fit. Stuff that does not affect your survival generally just sticks around as is. That means that those feathers are either a genetically recent mutation that only ever covered part of the body in your birdmen's evolutionary history, or your birdmen have a specific reason to be more fit only having feathers on the back.

Early feathered dinosaurs may have had only partial coverage, but their feathers were short, fuzzy, and lacked structure because they had not been around long enough to really acquire all the features that we consider feathers today. Since your creatures seem to have long well formed feathers, this means your birdmen come from a long long line of feathered ancestors that evolved generation after generation to have those long, well organized structures. Because, their ancestors had feathers for so long, at some point natural selection would have gone for full body feather coverage because advantages in resisting the weather are typically going to be such a strong evolutionary prerogative. This leads to the conclusion, that these creatures are probably experiencing a specific evolutionary pressure that would cause them to lose their feathers rather than being an example of an early evolutionary state of feathers.

The closest example to this kind of evolution we have on Earth is Human hair. When humans learned to start wearing clothing, full body hair stopped being necessary, because we found a way to weather the elements without our hair, but places that proved to still benefit from hair even when we have clothing retained it such as our heads which are harder to cloth, and a greater source of heat loose than other areas. But, it was not actually clothing that made us lose our hair, but parasites. Fleas and Tics carry diseases that are harmful to humans, and hair gives them more places to hide on our bodies. So, evolving less hair to make us less attractive to parasites became more important to our survival than having enough hair to endure cold weather. 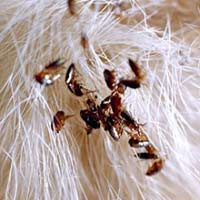 Likewise, your birdmen have probably retained their back feathers because they help with flight, stability, or some other survival important reason, but lost their other feathers because parasite resistance has for one reason or another become a stronger evolutionary pressure regarding their survival than hot or cold resistance. So, you could go the human route and say these creatures wair cloths, or you could just put them somewhere tropical but not too hot with very stable weather and lots of fleas and tics.

Feathers are modified scales, so your question could just as easily be why would a creature have scales on its back.

However, feathers are also very important signals in biology, showing that a creature is a healthy and suitable mate. Any creature with feathers will likely use them as a health indicator, even if they do not fly. A bright plumage indicates a healthy animal. Also, feathers form a protective oil barrier for aquatic species. If the creature needed to swim in the water and also needed to keep its back dry, feathers could do this. It may need this to keep an air envelope on the creatures back for buoyancy, like an inverted ballast. Feathers can be extended for air circulation to help cool the creature in hot weather. The animal turns its side to the breeze and the feathers raise like a sail, directing cooling air down over its body.

A creature with feathers only on its back may have this arrangement if it needs to absorp heat through its skin, but not so much that it needs all of its skin exposed.

Same reason why we humans are very hairy at the top of the head, moderately on some other parts, and less so on yet other parts. Form - including the presence and absence of feathers - follows function.

Your creature probably does not fly - they may use their wings for balance when biting prey from above. Feathers on the side where they face prey could be something that the prey could pull to induce pain. Instead they have hard scales.

16
Is a four armed arboreal reptile as described viable?
61
Why is this creature afraid of water but not of body or plant fluids?
7
Foraging behavior of a forest slime
3
Could this idea for an anatomically functional merfolk "sound" plausible?
3
Why would this creature have a head?
3
Is my Bioluminescent, Four-legged, Bat Creature Possible?
4
Best place for wings on a dragon-eagle
1
Might this animal be able to fly?
3
Could a creature use reptile scales to fly?