So, you are a powerful empire, where most of the army consists of magically self-enhanced warriors, who can for a limited but not short amount of time double(regular soldiers) to triple(elite soldiers) their physical strength. Sadly, your magic powers restricted you from use of metal, and your army doesn't have gunpowder.

Instead your army uses blunt weapons, throwing spears and bows with draw strength up to 800 pounds. They have mastered working with wood and bone, being able to magically strengthen its internal structure and shape it to the prefered shape, similarly to how blacksmiths work the metal. The strengthened effect is non-magical, only the process of strengthening is.

In terms of shipmaking skills, they have reached peak of the age of sail. But there are no cannons.

Long range weapons they have are only: Bows, throwing spears, slings, pitch filled pots, mechanical siege weapons, and most importantly, but in somewhat limited supply, magic flame throwers. These flame throwers have range between 80 and 200 m, with those of longer range being more limited than short range ones.

So my question is, with only these types of weapons, how would warships of such an empire look like?

So first things first, the fire is a relatively short ranged weapon no matter what. The big draw heavy ballista might be able to deliver accelerants like oil and pitch, but even the handheld bows are going to fire way to hard to stay lit across their flight. The speed of the arrow pulls the burning wick out of the vapor pocket and extinguishes it. Having built a couple flaming arrows myself, it's surprisingly complicated to get right.

But here's the deal, those bows and siege weapons are putting out a HUGE amount of kinetic energy! They might as well be small cannon. Those are the things which kill your crew, so those are the things you focus on defending against.

Let's start with a trireme, that's about right. The physical abilities will come in handy for the rowers below decks. Switching to rowers will be necessary because as others mentioned the sails will be a primary target in a fight. Since we're "peak age of sail" our vessels will still have sophisticated rigging to allow them to move under sail for long voyages then stow them for a fight.

The whole ship is round as possible, built possibly with outriggers below or at the waterline for stability. There is a round reinforced canopy "shell" over the main deck, the masts protrude through this. The sails can be withdrawn into the ship to protect them or cut free and jettisoned over the side if they catch fire. The primary objective of the hull (besides flotation) is to deflect incoming missiles. This also restricts the firing angle, so there may be archery platforms with retractable roofs in parts of the shell.

So it's going to be hard to cripple this ship from long range, the rowers are protected below decks and it's not weather-dependent so it's hard to outmaneuver. The marines on deck are protected by their shell overhead and bulkheads they can use for cover on the sides. It's probably pretty heavy and slow though, so will want to close to engage.

Boarding is going to be awful. These guys can hulk out at will so no one is gonna want to climb aboard one of their vessels to duke it out. If they're fighting an empire of normal people, their primary strategy would be to close and board the non-hulks. Fighting other hulks, yeah not so much. That's where getting the fire on the deck under the shield or into the rower's compartment would be super effective. That's the part a magic flamethrower is PERFECT for.

Ships planning to tangle with these weapons are going to have lots of active and passive fire protection. The rails and top deck are all built to shed water, and have raised ridged walkways designed for traction when oily and wet. Both the prow and stern have adjustable ports which allow water to pour across the deck and sides of the ship when she's turned directly into the waves. Heavy treated and soaked curtains cover the rower's windows, vents, and oar holes during battle. The ship can purposely soak itself and many commanders would likely rather fight in heavy rain or storms.

Rams would be effective weapons. I am still liking the idea of low, missile-resistant ships using outriggers of some sort for stability. You'd have a variety of rams, some traditional and meant to inflict damage below the waterline, others more vertical like an axe blade to try to sever the outriggers of other ships. I think the worst would be a heavily-reinforced cone designed to punch through the side of the oar deck, vents a meter back from the tip to let you fire your magic flamethrower directly into the enemies rowers' compartment.

I would probably start with a ship donning Greek Fire. 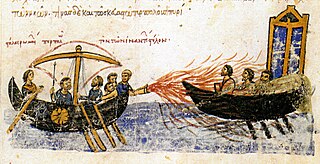 Fire is always a threat on a wooden ship and with the prospect of an enemy using massive flamethrowers the risk would become acute.

Measures would need to be taken to protect ships against fire for close quarter actions. So no sails or at least sails that could be stowed for battle on some ships. Better to use oar power with the rowers completely enclosed below, decks saturated with water and lots of extra water in barrels. One strategy that might be used would then be to attempt to ram and sink the flame throwing ship(s).

That said the flamethrower ships (in fact all ships) would be very vulnerable to attack from missile weapons. With a draw strength of 800 lb it should be possible to fire missiles 400+ yards so burning projectiles and pots of pitch, oil or other flammable materials could be fired at a flamethrower ship from beyond flamethrower range and in large quantities.

Another weapon that was used to good effect historically and might have found favour in your world would be the fire ship. It would need the right conditions but with the right wind and placement could be very effective. Old ships could be filled with brush wood, tar and other flammable materials set afire and allowed to blow into the enemy line. A flamethrower firing at an enemy fire ship that was approaching would only make matters worse as it is unlikely the fire would sink the ship before it collided with the flamethrower ship.

It is a well known fact that the eastern Roman or "Byzantine" Empire equipped its warships with flame throwing devices as early as the 7th century AD. And even though those devices couldn't shoot flame as far as your magical ones could, they were still vital to winning several victories and might have extended the life of the empire for centuries. Emperor Constantine VII claimed that the secret of the flame throwers had been given by an angel from heaven.

So similar flamethrowers with your even greater ranges should be even more important super weapons than the "Byzantine" ones. So you should research the eastern Roman or "Byzantine" navy and learn how those medieval flamethrowers affected the designs of those ships and naval tactics, because your superior magical flame throwers should affect the designs and tactics of your ships even more.

Not the answer you're looking for? Browse other questions tagged magic weapons military ships .

17
Which is a more effective strategic weapon/deterrent in a medieval fantasy world. A flying ship or a super gun or spellarms?
2
Justifying limited use of arrows, while allowing them to be effective in short ranges?
18
How to realistically implement magic-users in medieval warfare?
6
Cannonless ship of the line - could I have ship of line with magic catapults/balistae?
1
Naval cannons vs ships made of magic wood
6
Gun & Pike Era Orc army and tactic
8
Dedicated castle assault unit
2
Concrete Warships vs Steel Warships