At this point, roughly 98% of D&D SRD monsters are on the good side in my setting, I mean, they're too cool. So, I decided to throw something less cool, scary, intimidating and evil that's preferably not a nun. 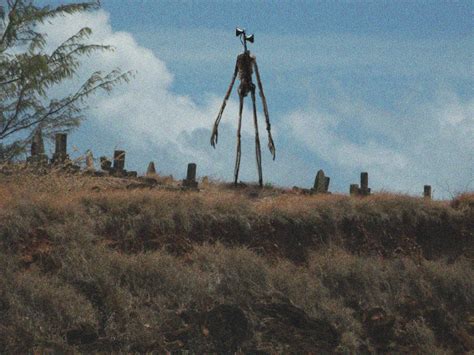 Siren Head started out as a scary picture with a short story attached to it. Now it became more fleshed out, even if that only means the speakers now have teeth.

Wanting to add something to make it more concrete, I made this addendum:

Siren Head is able to move those loudspeaker (looking) things around in 180° in both directions and aim them. The speakers are also capable of unleashing a sound-based attack that normally has the same effect on people as Justin Bieber's Baby, but it also has the potential to kill people.

Since I'm no Kurogiri, I can't make him open a portal to the 1883 Eruption of Krakatoa. It somehow has to produce a sound that can kill a person on its own.

That was until I discovered different damage mechanisms. Sonar can cause tissue shearing and hypothermia. Then there are also the directional speakers.

Though being sparing with energy is good thing, use as much as you need. Beware of what the loudspeakers can actually handle. Siren Head can't go deaf, it uses IR and sign language.

How could Siren Head instantaneously (or at least) kill a human, only with sound, in the most efficient way possible.

Note: There seem to be a few ways to kill stuff with sound:

Some info on Directional Sound:

Killing with sound above water is quite hard... or at least, once you hit 210dB what you end up with is a shockwave rather than a sound as such, because the required pressure levels for the sound wave to remain undistorted exceed atmospheric pressure at sea level. Underwater, or on other planets with much thicker atmospheres, you can make far more powerful sounds, and your request would be straightfoward to solve.

What Siren Head does, then, is generate and emit shockwaves from a tube... a little bit like a gun, only without the useful bit of actually propelling some kind of projectile. Shooting blanks.

Shockwaves dissipate their energy quite rapidly in air, and are subject to the inverse square law, and as such a sound wave will lose 6db for each doubling of distance. To develop a good 210+dB at a target who isn't literally touching the emitters, you'll need to be generating a lot more power at those emitters. Krakatoa generated ~172dB at 100 miles, so (very dubious maths here, but it should be close enough for your needs) to get a deadly shockwave strength you'd need to be 1.2 miles away. From the equivalent of a 200Mt bomb. Realistically, the force of the blast would smash you against the scenery and so be sufficiently fatal at much greater distances than that, as would all the blast-driven debris and tsunamis and heat and so on.

Oh, and generating this multi-megatonne-blast equivalent is going to produce some recoil effects on the emitters. Hope they're quite firmly fixed in place. And Siren Head has a strong back. Actually, with that sort of strength, it'd be easier and a lot more efficient to run up to people and kick them to death instead.

Anyway, the take-home message here is that killing someone with sound from a distance is quite impractical. But that's OK, because once you've generated sound levels at the target of 150dB or so you'll probably burst their eardrums. This will be intensely painful, it will wreck their sense of balance for a while and induce intense vertigo, and of course they'll be deaf. This will stop them running away or offering anything beyond a token resistance, and Siren Head can just trot right up next to them and deliver the frivolously inefficient coup-de-grace in a suitable horrifying way for any non-deaf observers.

A direct pulse of 200 decibels directly to the chest should do it.

There are a surprisingly large numbers of way to kill people with sound. Continuous sound will do it, and periodically pulsing it if they're submerged seems to work as well. My personal method is just to use an ear-splitting sound (literally) to disable the subject, whereupon you kill them the old fashioned way (which I believe is katanas in anime). But if you want to kill someone instantly with sound, you need enough force to collapse the lungs immediately. Which is a lot.

Not the answer you're looking for? Browse other questions tagged science-based weapons audio or ask your own question.