So, you have found yourself in a situation where the city you manage has finished producing their first powered aircrafts, biplanes.

They aren't too good. They barely fly 140 km/h, so they're pretty slow too. But you need them in the air against enemy drake mounted warriors, who, luckily fly 60-70 km/h and have top speed only at around 90-100 km/h. Drake mounted warriors are not that dangerous in the air, only having 240 pound composite short bow and a dozen of arrows for aerial combat, but they're a bother, dropping primitive molotovs on the ground and naval targets of your allies, so you need to take them down a peg.

You don't have synchronization gears, so you had to go for "pusher" setting, placing your propeller behind your plane, leaving the front of the plane open for your gunner who sits in front of the pilot.

Now, you're already working on switching into smokeless powder, but the war was sudden and it was quite low on your priority list. In a month or so, you might be ready to start pumping out your first maxims with smokeless ammo. But you don't have a month or so, you need to offer your airforceless allies support now. You need a stopgap solution, before the enemy completely overwhelms your allies.

Your army has machine guns, but they're crank operated black powder ammunition machine guns. The ones you have are replicas of historical black powder machine guns of the second half of 19th century. Gatlings are too heavy for your aircraft, but there are other, lighter historical machine guns that you too have (for example things like coffee mill gun and Gardner gun, or other such guns).

Your problem is that the gun needs to be light enough for a light aircraft and gunner should be able to reload the gun with minimal adjustments to the gun itself. So, which black powder machine gun will you choose for this job? Or would perhaps using period rifles be preferable to those?

Assuming we do want an actual blackpowder weapon, the key criterion is relatively light weight. For that reason multi-barrel contraptions like the Gatling or Mitrailleuse are out; banks of a dozen shotguns even more so. You should pick a single-barrel, multi-shot device: either the the Puckle gun or the Agar gun. Both are primitive and have problems that would make for interesting plot complications:

The Puckle gun is not really a MG, just a supersized revolver with maybe a dozen balls in a cylinder. You might be able to reload entire spare cylinders, but reloading makes for windows of vulnerability, and each spare cylinder increases weight.

The Agar gun is a true MG, is quite lightweight, and has been used in CW for continuous fire until the barrel overheated---a lot of shots. The original required additional personnel to reload the cartridges into metal cups, but I suppose you could avoid this by carrying a lot of readily loaded cups, which are lightweight. The big problem is the feeding hopper---it works fine when the gun is on level ground, but maneuvering in the air could cause feeding jams, or even spill the cartridges right out of the hopper. So the drakes riders' tactic would be to force abrupt maneuvers on the biplanes, thus disabling the gun. :-)

The ideal setup in my opinion would be to have the gunner sit behind the pilot and construct his seat in a manner allowing him to shoot downwards. He has a rack with about ten double barrelled shotguns in front of him, so he can fire a decent number of shots in quick succession.

The strategy to fight dragons would either be to fly very close to them and kill the rider or the dragons wings with a barrage of grapeshot before he can snipe you or to gain an altitude advantage over the dragon rider and use the gravity-extended range of the shotguns to kill the dragon rider in a hail of shotgun fire. After each attack run the gunner would have to reload the shotguns for the next one. Story wise these two strategies could create some interesting conflict between two schools of thought in the military. Young, heroic, showoffy plane crews preferring the dangerous, but quick "meele" while the leadership prefers the saver, but not always successful altitude strategy.

This shotgun setup has the advantages that the gunner would have a very wide firing field compared to a front mounted gun, the smoke would not borther the pilot as the gunner sits behind him and the armaments of the planes would be a lot cheaper, which is always nice.

EDIT1: I do agree with user535733 assessment that you can find better uses for your aircrafts than fighting dragons. The shotgun setup would just be an easy and nice addition enabling aerial combat. The "gunner" could do other useful stuff like observation or communication whenever he is not fighting.

EDIT2: The issue of range was raised by some people, but I think they misinterpret the situation and rely too much on plane VS plane dogfights. Buckshot is still somewhat useful against human sized targets at about 100 m, but even if this is truely the limit, one must remember that we are fighting drake, not airplanes. Firstly the drakes will have large, woundable wings instead of hard, armored scales and those will probably be about an order of magnitude bigger than human sized. Secondly the altitude strategy will greatly increase the effective range of shotguns. Thirdly, if airborne fights between birds are any indication, the drakes will attempt to ram the plane and take it out in meele. This is really their best bet. A front-mounted machine gun will do jack shit against a drake attacking from above. A shotgun will discourage any tackling attempts.

In a different note, I thought about using time fused shotgun shells, aka flag-granates, against the drakes. The technology is ancient, the Venitians invented time fused artillery shells in the 14th century. I'm not sure at which point in time handgun sized time fused shells for granate launchers became a thing, but I'd be willing to suspend my disbelief if OP uses them. They would definitely sort out any range issues, be useful for precision close air support and if they can be fired from the same guns as the buckshot they'll give the airplane a versitile arsenal.

Just do the same as the drakes, you're more effective.

Assuming that there's a reason other than the plot demands it for the meager amount of arrows and other equipment on the drakes that lends itself for aerial combat; you can just copy them.

Your biplanes should be strong enough to easily carry two people - even if that means their top-speed drops closer to the drakes. Carry a dedicated gunner or even bow-person that does the shooting, and even drops molotovs or nets on the drakes.

You really don't need any fancy machine guns to hit targets that you can match speeds. Especially at such slow speeds. Shooting a bow at about 3.5 times the speed of your drakes, or a bullet at 9-10 times the speed of them, your planes shouldn't have that hard a time harassing the drake-riders enough that they become useless.

Not knowing what exactly you mean by a 240 pound composite shortbow, I'll take the speeds advertised for modern compound bows, which seem to be around 50-70lbs of draw-weight. Assuming your 240 pounds to be the draw weight of your fantasy bows, I guess the calculated speeds for bows with 1/4th of that are at least not too high. Thus we get around 300-340 feet per second arrow-speed. Or a rounded 100 meters per second -> which neatly translates to 340 km/h.

The muzzle velocity for blackpowder guns seems to be somewhere between 120 m/s to 370 m/s according to wikipedia. Taking the mean of these to values so we don't have to think about air resistance, etc. we end up with about 250m/s -> some 900 km/h.

You're in a situation where you need to fight slow, low-flying enemies with relatively large cross-sections and wings that can't just ignore a few holes because they're made out of flesh.

You're also on a very short industrial time scale. Manufacturing, modifying, and attaching machine guns to your planes is going to take time, especially if the existing models are poorly optimized for being mounted on a plane (and they would be, since they are already optimized for ground engagement).

So forget about the fancy guns, use your speed to get above them, and decimate them with flechettes. 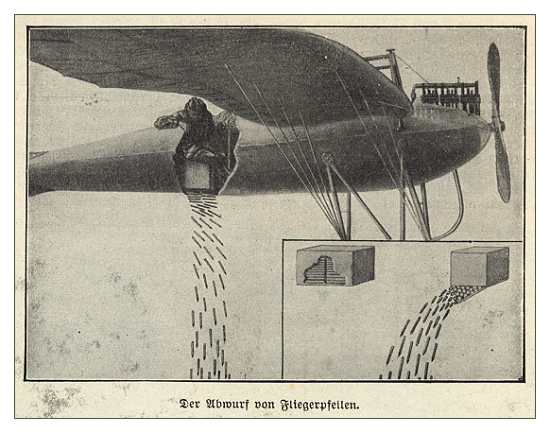 Cheap, easy to produce, silent, smokeless, and viciously lethal. Flechettes were a dangerous and effective munition dropped from planes early in WWI. 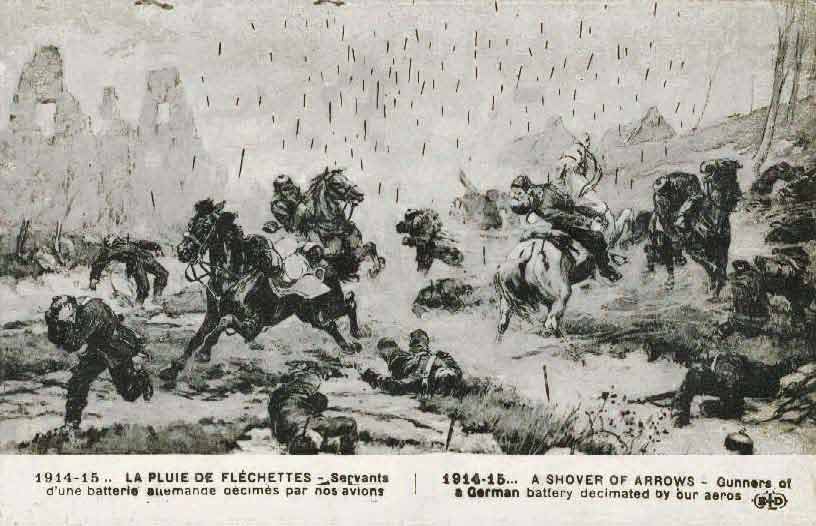 Carried in bundles in the high hundreds and dispensed with a simple pull of a string, flechettes blanket hundreds of square yards with lethal rain, punching through infantry helmets as easily as they did trees. 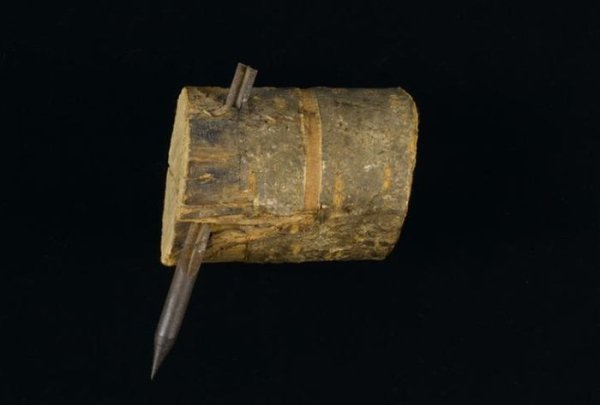 Your initial aircraft have much greater value as scouts, observers, and secure messengers than as active combatants. Skip the hassle of the gun entirely until your smokeless powder is ready.

Survival is about speed and maneuverability: Your aircraft is faster than a drake, and should be able to break contact at need. As anti-air combatants, your craft should by lure enemy drakes into pre-arranged ambushes from ground unit fire instead of directly trying to shoot them down.

Once you have sturdier, faster, more maneuverable aircraft, smokeless powder, and synchronizing gears, your battle in the air will evolve to become very different. But you're not there yet.

It depends a bit on the exact vulnerabilities of the target but assuming they had bat-like wings I think a large shot gun would be quite effective At spoiling their aerodynamics and ruining their ability to fly.

Since it doesn’t have to be carried by human you can use something like a “punt gun” which is more akin to a small cannon than a normal shot gun.

Much depends on the relative agility of drakes and planes. If the planes are better, I would stick with a prop on the front of the plane and have a punt gunner with a swivel mount on the back. Flying alongside and blast 'em.

I suspect drakes might be more agile though, in which case your planes are doomed. Their riders' weapons are useless, but all it needs to do is rake the wings to send your plane plummeting to their certain destruction.

8
How could an airplane defend against an electromagnetic pulse attack from another airplane?
16
How would a lack of smokeless propellant affect WW1?
22
Which modern firearm should a time traveler bring to be easily reproducible for a historic civilization?
13
Ideal Firearms for time travel or low tech universe exploration
10
Can korean bolt throwing cannons not be a dead end?
7
How to make pneumatic weaponry/airguns the main weapons of a miliary force?
2
What kind of support forces would accompany a one-noble armored fighting vehicle into the mountains on a propagandized anti-insurgent mission?