So I making a story where there is FTL travel, but it is never referenced as actually being FTL. What is a good explanation of this, while still cutting a 4-light-year trip to a few hours?

No FTL? Just Increase the Speed of Light

Just make light faster. What used to be a few light years away is now just a few light hours. It's what they used in Futurama.

And sadly by our current theories, it's probably the most scientifically sound idea we know. There is a theory that light used to be faster which explains the uniform cosmic microwave background distribution. We just have no idea how or why this happened.

That being said, I probably wouldn't use this explanation outside of a comedy series.

As the ship powered up, the captain spoke over the intercom to the passengers, “Folks, please make sure you’re buckled into those gravity couches. I know they’re uncomfortable, but these new engines burn hot. We will be at Alpha Centauri in four hours. Burn starts in 60 seconds from my mark. ... Mark!”

There are a few different 'types' of ftl-travel that run a spectrum from 'pretty scientific' to 'totally made up' (e.g. Star Trek 'warp' which inspired the very possible Alcubierre Drive to Dune's spiced-up psychic navigators).

Here are some of them: 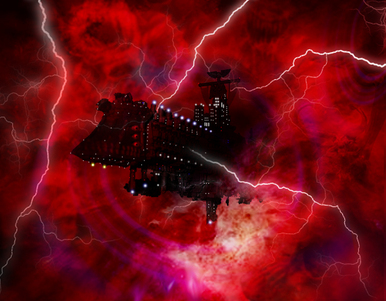 Generally seems to be some sort of upper/lower/side dimension to the 'regular' universe we live in where a small amount of movement in it translates to massive distances relative to the 'regular' universe (imagine shrinking a 500px image down to 50px, traveling your pixel-sized craft 40px then blowing it back up to 500 again) - this appears in franchises like Stargate SG-1/Atlantis, and the Warhammer 40,000 universe (which additionally populates this 'hyperspace' world with demons and monsters.) where hyperspace becomes this 'place' you can spend time travelling in, for potentially long periods of time (within Stargate, they would often spend weeks at a time stuck on ships with blue hyperspace-stuff zipping past the windows) - visually these transitions are usually shown as if the ship is breaking open some barrier and going into/coming out of it.

Basically the function of the aforementioned Alcubierre Drive - As per Einstein's description of time being a lot like an elastic fabric, you warp the fabric in a way that either a) allows you to 'surf' on a moving wave of spacetime, or b) pull spacetime in the location you wish to travel to towards you, which creates this skewed visual effect on ships entering/exiting this mode of travel, and often times when they exit there's no inertia whatsoever, because as far as the people in the 'warp bubble' are concerned they've been completely stationary until arriving at their destination. 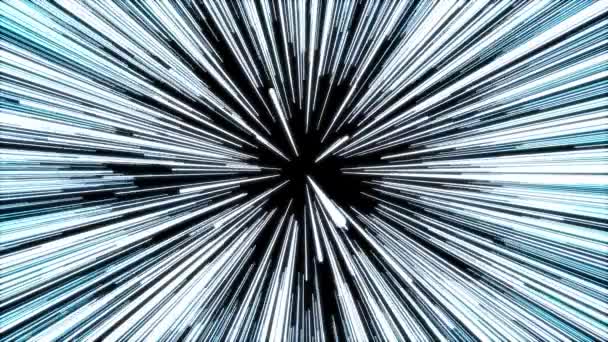 (probably not what you're after) but these generally are the laziest answer and explain themselves something along the lines of *"f**ck Einstein I'm trying to write a story here - it works because it just does"*. If you want to be slightly more technical than that, it essentially involves the idea that the lightspeed barrier in the universe is more like a hill than an absolute non-negotiable wall, where after you pump enough energy into climbing over it, you pass it and can go faster than light in the same way earth (and all planets) have an 'escape velocity' needed to overcome that pesky 'what goes up must come down' "law".

As to how you reference these, it seems like a purely memetic problem - that is to say, an issue of popular/functional language. You can go full Rick and Morty if you want and call everything 'bloopledoops' or 'grumpleflonks' and everyone more or less understands what you're on about based on context, because the people who don't know what hyperdrives are generally happen also to be people that don't even know the timespace universe has a speed-limit.

3
What effects would we see on Earth if the speed of light universally increased?

9
hypothetical criteria for non-paradox FTL
58
Are there any ways to allow some form of FTL travel without allowing time travel?
4
Non-causality-violating FTL travel. / Can omnipotence beat causality?
8
Can we safe FTL from paradoxes by using a Multiverse?
46
How can I justify a Type III civilization using planetary jump drives instead of FTL starships for galactic commerce and travel?
4
Exploiting Time Travel FTL Mechanics to Create FTL Without Time Travel
13
Interstellar combat without instant FTL