I'm working on a completely flat, underground world, where "world" means "universe" rather than the equivalent of "planet". Here's what I have so far:

The idea is that this world either did not "form naturally" based on physical laws or did so based on laws which are different from those in our universe. 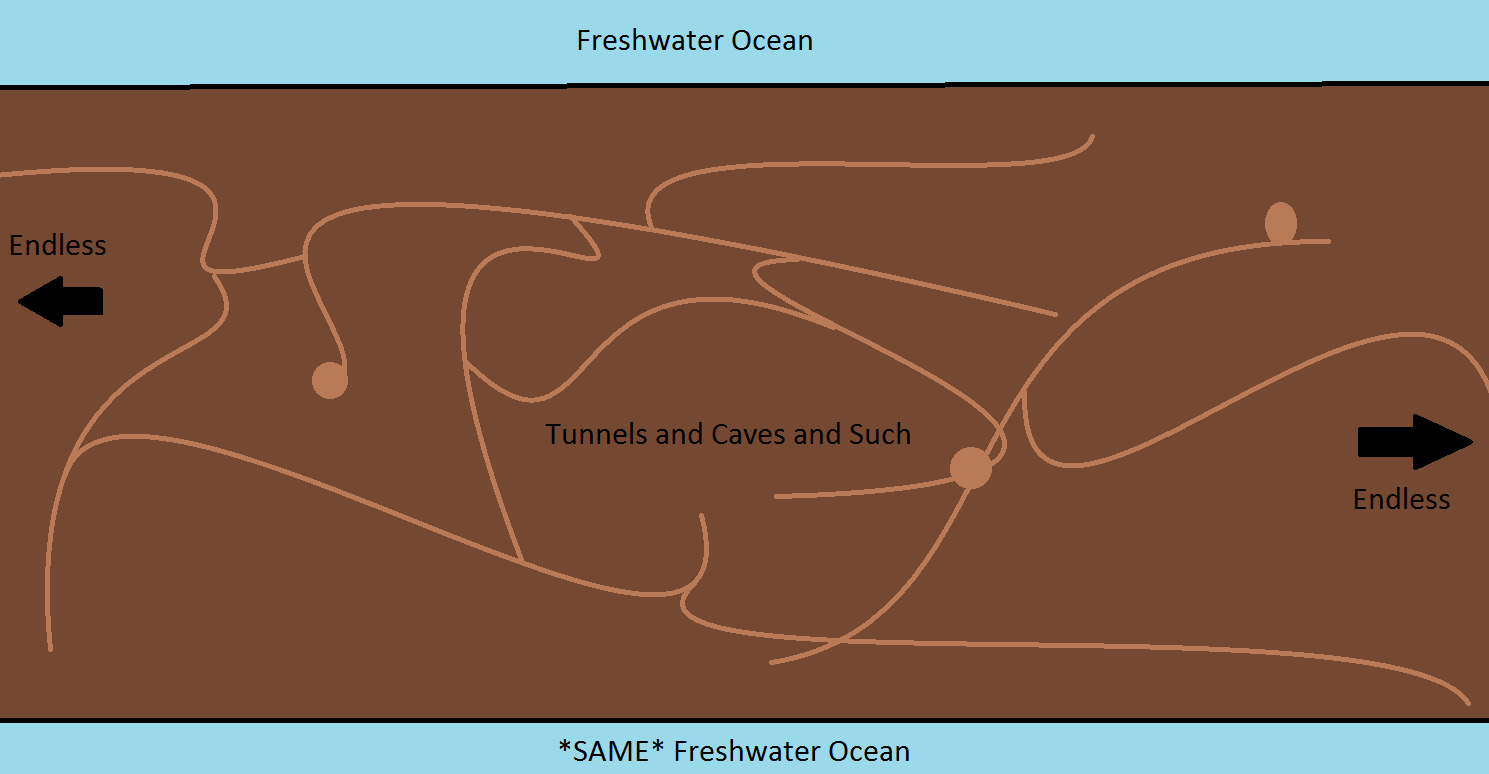 In thinking about this world, I've realized that I have some issues to overcome:

I have some ideas about gravity (some portion of the world that is constantly accelerating "up" or some portion that is "fixed" in space), heat and light (vertical bars that are very hot and bright), and water (based on previous comments and answers, mostly making the "ocean" much shallower and allowing for infinite rivers from the ocean to itself). However, this question is about the last point above.

In this setting, how can there be sufficient air pressure in the cave systems to allow for people (not necessarily human) to live?

Note: I marked this question #physics because I ideally want answers with explanations based on real-world physics. If the answer is necessarily magic/non-real physics, please explain why.

Big Note: I've totally re-written this question based on comments, which is why there's a lot of ancillary information.

Air Pressure Follows the Same Rules there as on Earth

Atmospheric pressure is largely the effect of the amount and composition of gasses, and the effect of gravity on the gasses. Due to how fluid pressure works, the use of tunnels is largely irrelevant and can be safely ignored.

Assuming your world is not infinite horizontally, but is rather arbitrarily large (like a Dyson Ring), has an atmospheric composition similar to Earth (including composition of gasses, and gas to volume ratio), has Gravity similar to earth, and is a closed system so air can't escape: air would function like on Earth and would be livable in some areas. That's a lot of assumptions, but you want humans to live there, so it's not going to be too far off and still be habitable.

As for livable areas, the higher you go, the less air pressure. At around 2,500 meters up people altitude sickness can start, at 8,000 meters the air would be unbreathable. This question answers how deep they could go. 2.6 miles is our deepest and is extremely dangerous for humans. I would estimate around 5-10 miles vertically of traversable space, with the majority of people living within a mile of sea level atmospheric pressure, where it would be most comfortable.

For having it livable, it is just getting a spot where air pressure, temperature, food, and water are all available.

An infinite flat surface would not work from a gravitational perspective as the surface would disintegrate under gravity into lots of small planets or if there was no rotational movement a single ever expanding black hole. So best to use a planet or Dyson ring.

The habitability of the tunnels would depend on a lot of factors: the depth of the ocean, the permeability of the rock, the amount of volcanic activity, geological stability and fault lines for starters. Such a system would only be liveable if you assume a shallow ocean, highly impermeable rocks, very stable geology and not fault lines. Which I suspect is unlikely, but if that were the case people could live there.

If the cave system was large enough air pressure differences between locations would even themselves out over time.

If you were thinking of a deep water ocean like those on Earth then there are extreme problems. The pressure from the water above would be huge and would probably rupture at least some of the tunnels causing catastrophic flooding. All it would take is one serious leak and water at 100-1000 atmospheres pressure would rush into the cave system. All the caves would be explosively flooded in short order whilst the atmosphere in the caves would be compressed into a few small high pressure areas at 100-1000 atmospheres pressure.

Not the answer you're looking for? Browse other questions tagged physics underground nonspherical-worlds or ask your own question.

15
How deep can underground tunnels be within the scope of science?

10
How to avoid infinite gravity
29
Which shape for an infinite world with usual sun cycles?
7
Planet with infinite overlapping surface on an axis, problems of the concept
8
Infinite tube world
2
What happens when we travel to our new dimension?
8
How could the air be stopped from falling off of a flat world?
6
Maximizing the vertical range of livable air pressure
105
Would planets be cubic in my “cuboverse”?
48
Pressure inside an infinite ocean?