How bright were medieval cities at night, seen from the sky?

I'm a witch flying on my broomstick over 14th century England. I've got regular human eyes, and my cruising height is 500 metres or up to a kilometre, depending on the weather. Assuming it is a moonless night, around 3 AM. My goal is to find my house (which is inside the city walls), with minimal risk of being seen by any insomniacs that happen to be staring at the night sky.

Can I discern farms, villages, cities from my height? Were there enough lights so that I could tell one city from another? And was there enough artificial light for me to find my house? How about any other house? If any of these tasks are impossible, how low must I fly before I can accomplish them?

Three factors enter into how well you can see a medieval city from the air at night.

First, outdoor lighting is almost exclusively torches and oil/fat lamps (depending on the situation). These aren't very bright, compared to modern streetlights or yard lights. Second, due to cost, such lighting is likely to be as sparse as it can be, without too much inconvenience to the nobles and merchants (i.e. the slums will be very dark, the better parts of town merely quite dim).

Third is a matter of how well nourished your witch is -- many, if not most in medieval times were undernourished, if not flat out malnourished, and the latter, especially, will greatly affect night vision -- to the point where someone near starvation will be effectively blind after dusk. The same may be true even if your witch has enough calories in his/her diet -- if they aren't getting enough of certain nutrients (protein and vitamin A), they may find even a night lit by full moon still so dark it's very hazardous to fly at all after dark.

Also worthy of note is that most of the time, in most uses, outdoor lighting was applied only when needed. Torches wouldn't normally be kept burning all night, they'd be lit and doused as needed; if there was a torch in a holder outside the tavern door, it was probably cold and there for convenience in case of the need to greet a lord's carriage. Indoor light leaking out of windows won't contribute much, either, as shutters or curtains would likely be closed after dark except in the hottest weather.

You will use landmarks. 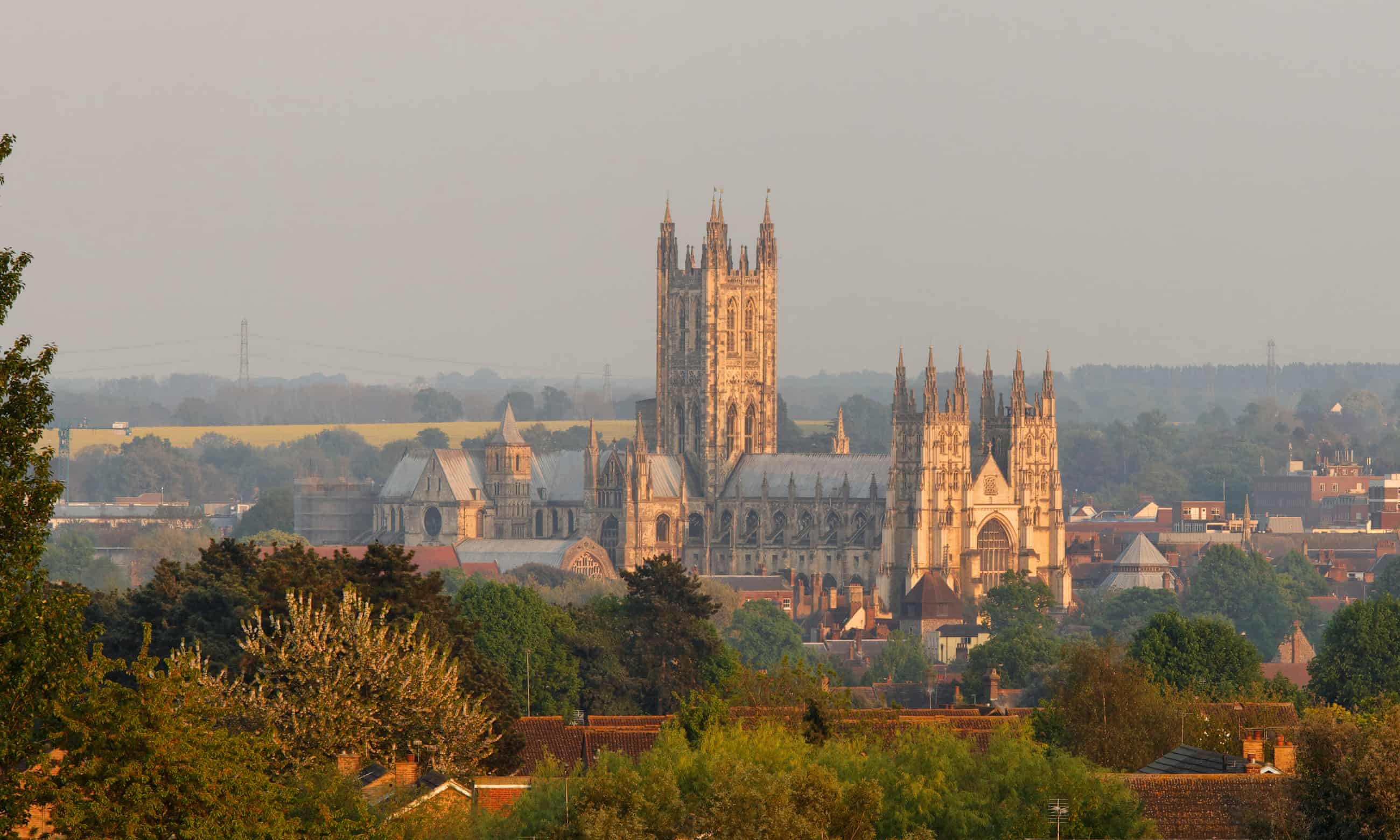 Depicted: Canterbury cathedral. It has been there a long time. Most towns of any size in the period would have at least one church - if not a cathedral, some built thing with bell towers. At altitude it would be visible from a kilometer, even by starlight. People still orient themselves in cities this way.

Cathedrals are asymmetric and so make good landmarks. If I am approaching with the nave between myself and the tower I can orient myself over the town and then drop down into my neighborhood.

Other landmarks would include green spaces or large trees. The river (most towns had running water of some sort) would also be useful because if you were way out in the country or visibility was low you could sweep back and forth until you saw it, then turn and follow it in.

If your which lives in a larger city, for example London (in 1417, Sir Henry Barton, Lord Mayor of London, ordained "lanterns with lights to be hung out on the winter evenings between Hallowtide and Candlemasse.") or Paris (in the beginning of the 16th century, the inhabitants were ordered to keep lights burning in the windows of all houses that faced the streets), there would be some light, albeit very dark compared to now.

Outside of larger cities, you're pretty much relying on the Watch - you're not really going to see any light sources in medieval times. Though light sources were not as unavailable as you may think, glass windows were either very small or non-existent, so even though it may have been light inside, very little will have spilled outside.

However, you have a flying witch, which means you have magic! You may want to use magic to "improve" the technology level to Georgian levels. Gas Street Lighting was introduced in London in 1809, so why not have something like that?

Not the answer you're looking for? Browse other questions tagged science-based medieval cities senses .

24
How can I brighten the night sky (just a bit)?
36
How would cities be designed that were threatened by dragons?
1
Projecting on the night sky
12
How would the night sky appear from the inside of a star cluster?
18
How big were medieval cities?
23
Scientific explanation for a exceptionally bright night sky
2
How bright and lit up could cities be in the future?
1
How Bright Would Super Saturn's Rings Be in Our Sky?