What different biological aspects would facilitate an elite race of warrior aliens?

A bit of backstory: I'm attempting to create a militaristic alien race composed of elite warriors capable of conquering the galaxy. They posses a variety of "enhanced" abilities such as immense strength, hearing, eyesight, agility, etc. There's quite a bit of diversity within the race itself, being composed of intermingling sub-classes which would allow for a skew of these abilities in one direction or another, but the main theme here is they all posses various types of traditionally predatory traits such as fangs and claws; however, additional things like scales or tails would be more sub-class specific.

My question is this: In accordance with what we know about the biology of predator species here on earth, humans included, what aspects are required/most likely to be present in this race as a whole in order to give them the warrior prowess they are famous for? Are some more vital than others? Any drawbacks?

This is inclusive of things like anatomy, hormones, and anything else that might be deemed useful. I realize this is a broad question so more specific instances are welcome too.

They are a genetically identical nest, like the social insects.

Making war means cooperation, which means putting the needs of the group ahead of the needs of the individual. Humans are able to do that to some degree which accounts for much of our success as a species. The social insects do that better than anything else. The organism is the nest and individuals are dispensable organs of the nest. There is no evolutionary selective pressure on the ant for individual evolutionary fitness. Individuals can act to benefit the nest without regard to personal outcome. An individual nest member might retreat but that individual will never be afraid.

As regards differences between individuals, these can be different castes. 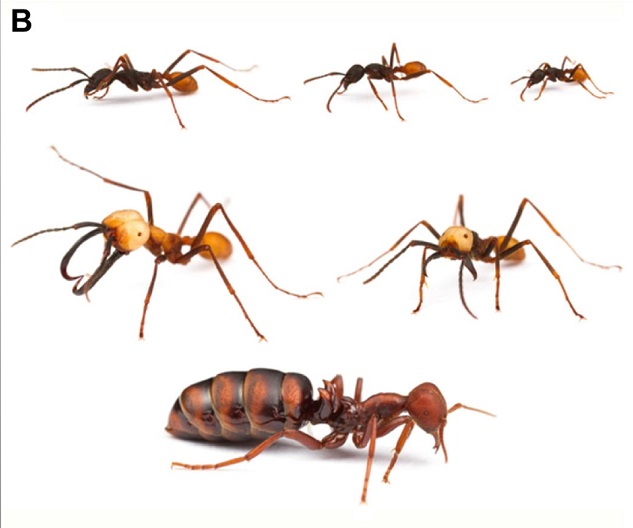 Predator features here on earth include:
- Eyes on the front of the head: binocular vision helps tracks prey
- Claws, Fangs and sharp teeth for eating meat
- Fast reflexes
- Lean build
- tails are possible, they help with balancing during high-speed chases

Senses like smell or eyesights are equally important for predator and prey, so I would not expect differences. I do suspect that a space-faring race will focus on vision.

Horns, large spikes and armor plates are not an option, they are defensive features of slow plan-eaters, and will only slow down an agile hunter.

Conquering a galaxy is a tad more complex than catching wabbits, so your species will also need:
- Pack hunting and social structure, like in wolves or lions
- Advanced brain, so mammals are more likely than reptiles.

In terms of hormones and temperament, they gotta have the fighting spirit, but they also need to moderate it. Modern armies spend vast majority time preparing, getting into position, and waiting for orders. A bunch of aggressive hot-heads will not get ahead.

For a race of galactic conquerors, biological traits would be secondary to social and psychological ones.

The species may be small and weak, but they should value cooperation, possess an expansionist's mindset and feel no mercy towards other sentinels.

Physical weakness can be complemented by technology. The lack of bravery and determination can not be.

If you still want to look for biological inspiration, look at Klingons.

I'm going to assume you want the classical "brute extremely dangerous fighter culture in space" type of warrior, if not then Willk's answer should be it.

While strength is often prized, strength will not win you a space battle with guns. An intelligent silverback gorilla would carry a big gun and take a lot of firepower to take down but he would also present a big and easy target that cant fit as easily in space ships and the like and more importantly it'll exhaust itself quickly. Modern fights are about stamina. Dropping most of your gear the moment a fight starts is even part of military doctrine. So to start with your aliens would be build for stamina, long-term combat where they can suffer through extended periods of exhausting combat stress and still be efficient.

A gun does not care if it is fired by a big or small guy. Being smaller means your race can cram more aliens in the same space, feed more aliens with the same food and have smaller openings in their ships making it harder for larger enemies to move through. They shouldnt be too small, but small enough to be worth it without it becoming too hard to operate the galaxy's standard gun.

As another advantage to being smaller is that growing adult soldiers becomes easier as they reach adulthood a bit faster, or at least a fully grown age not necessarily a fully educated and brain development age. This makes resupplying losses much easier. On top of that in zero-G combat you can turn around your axis faster if you are smaller, giving you an edge.

Otherwise the usual applies. Quick reflexes (which does mean that thought processes are short-cirquited and friendly fire is more likely), low on food requirements (in line with stamina), omnivores for easier supply, good eyesight etc.

Consider for a moment the needs of a spacefaring race built around war. Yes, they'd need all the traditional physical features, like strength, eyesight, etc, but that doesn't seem to be something you really need help will. I bet you could write a basic list. So I'll give you a (slightly) more interesting one:

An inclination toward cooperation

War requires each side to understand what they're fighting for, whether it's as simple as the King or as complex as the American Ideal. When your race cooperates, they'll be able to overcome enemies who don't with ease.

The most successful armies plan. An intelligence is a prerequisite to the tactics and information-gathering that is commonplaces in conflicts. Knowing why your enemy is somewhere is almost as important as where they are.

Sailing among the stars is a hard life. Ask anyone who worked on a submarine, and then ask them to imagine not being able to come up for air every day. It takes a psyche to live constantly in an environment drastically different from the one your species evolved in. Or maybe your species evolved on a rocket, who knows.

Apart from mentally demanding, space life is physically demanding as well. FTL takes a toll on the body, as does the rough-and-tumble of battle, the twirls of dogfights, and the wear of hundreds of near misses. They'll need to have a body that can withstand war.

Your race will need to be smart and resilient. They'll live on a spaceship presumably most of their lives, and will have to adapt to the circumstances that come with that.

Not the answer you're looking for? Browse other questions tagged science-based biology creature-design science-fiction xenobiology or ask your own question.

3
What characteristics would a telepathic, energy-absorbing race of aliens have?
11
What would cause male and female insectoid aliens to become highly dimorphic and live in different environments?
1
What muscular changes would a different hand structure require and what would be the benefits?
17
What would a biological creature need in order to see into the future?
24
What organs or modifications would be needed for a life biological creature not to require sleep?
5
How would martial arts be different for a winged race?