Dr. Frankenbull's Problem: How To Tell Aurochs From Bison

The mad scientist community is...mad, to put it kiddie-appropriately. Their logic has the tendency to make 0% sense 100% of the time (provided, of course, that they ever bring it up.)

So you can imagine a field scientist's confusion when the community tasked him to imagine a hybrid between a wild bison (they never specified which species) and a wild aurochs through their bones alone because hybrids between wild bison and domesticated aurochs are so done before. The problem with that is that the scientist has observed only live bison and never once studied their skeletons, and he had never seen a live wild aurochs. (In fairness, NO ONE has seen a live wild aurochs for roughly three centuries.) In short, he couldn't tell the two species apart just by looking at their bones.

In order to save his skin, he would need help from a higher power (that's us.) So, comprehensively speaking, just by looking at the bones alone, how would the field scientist differentiate a wild bison from a wild aurochs?

They are fairly easy to tell apart from just bones.

From the bones there are several obvious differences. Well start from the most obvious and work down.

the shape of the skull is an easy one and the first thing you look at in mammals. bison skulls are much wider/shorter proportionally and have smaller horns. Even a damaged skeleton will show this obvious difference. below we have an american bison skulls followed by an auroch skull. the difference holds true for european bison although the difference is smaller. 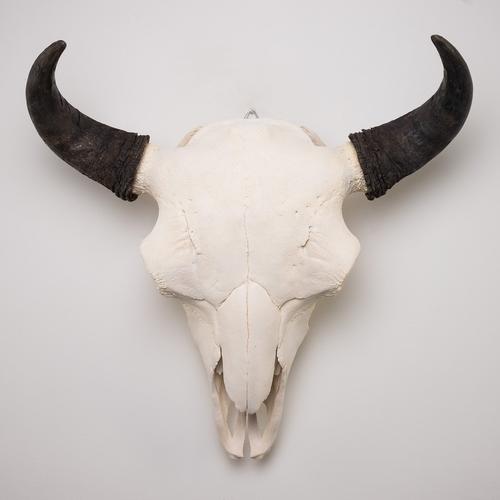 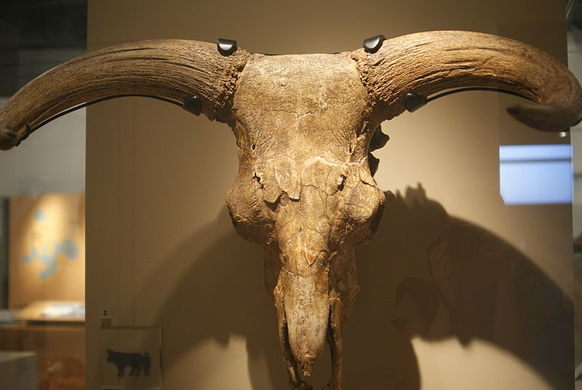 Between the american bison and the auroch there is a big difference in the hump which is much larger in bison and has a much stronger down curve in the thoracic spine and the position of the neck is much lower, again this difference is less pronounced in european bison but still noticeable. This also gives aurochs a much more horizontal profile.

General size can also be an indicator, american bison are bigger, but of course this only works if you are sure you have an adult. and the difference is almost nonexistent with european bison. If they only have a few bones this could easily lead to them being confused.

Auroch tails are longer, not that you are likely to find all the tail bones. I am sure someone who specializes in pleistocene mammals can spot a few more differences.

Skeleton of an auroch and bison. 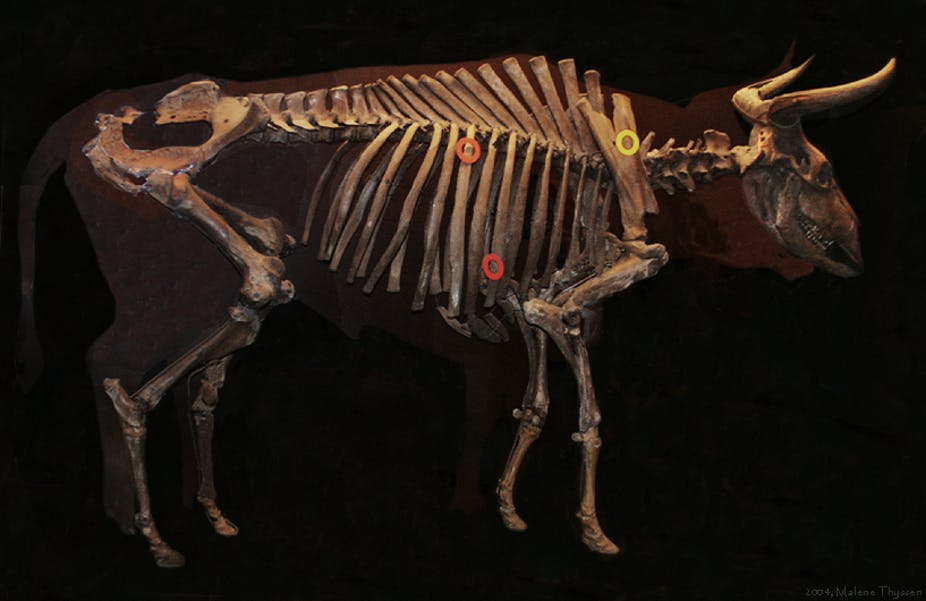 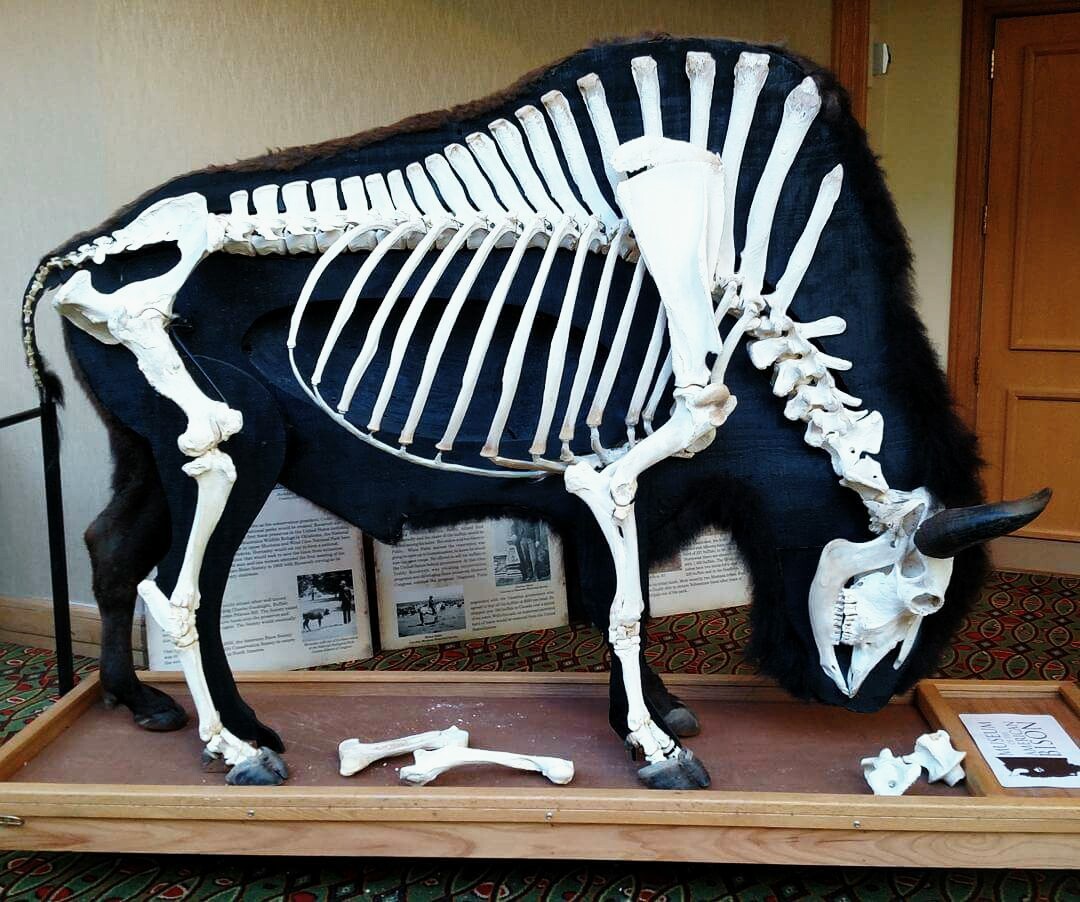 I am not good to the bones, but if I look at pictures/reconstruction of the two species, I can tell a difference: 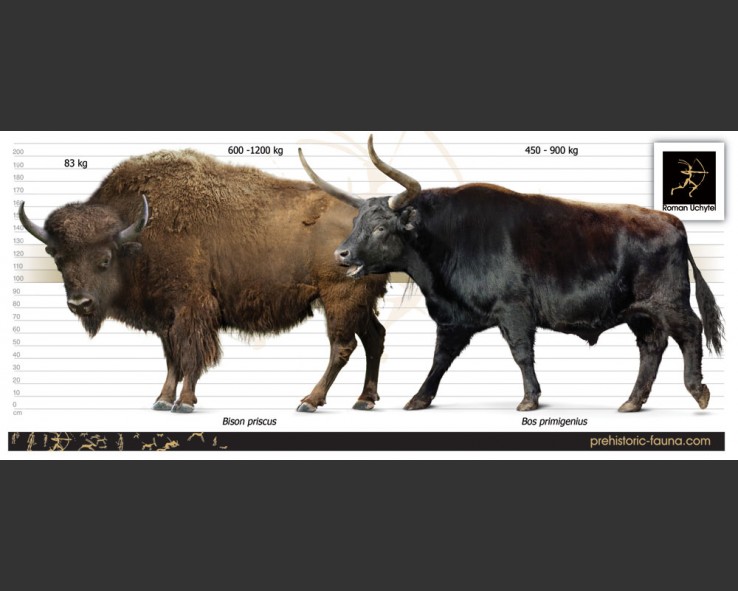 the horns make a big difference between the two.

And I suspect even the way they connect to the skull is peculiar.

So, go for the head!

The European "bison" is such a hybrid. 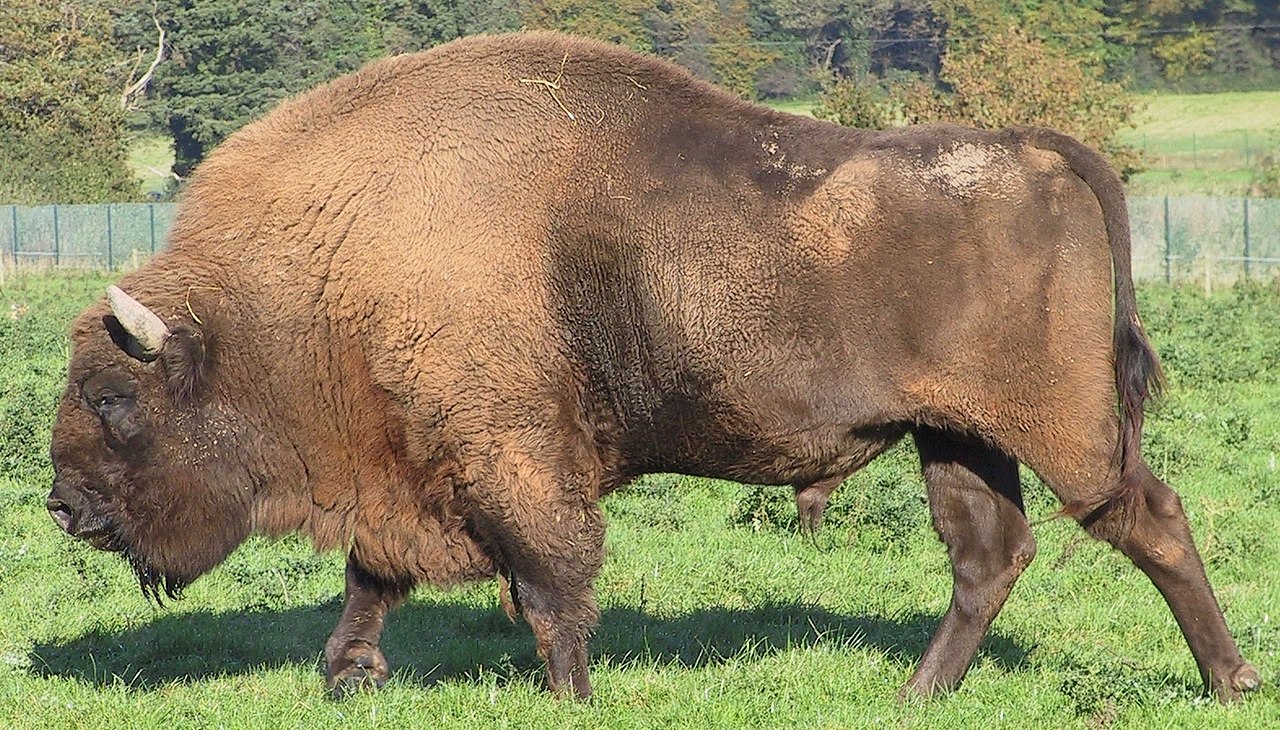 The European bison (Bison bonasus), also known as wisent (/ˈviːzənt/ or /ˈwiːzənt/) or the European wood bison, is a Eurasian species of bison. It is one of two extant species of bison, alongside the American bison.... Analysis of mitochondrial genomes and nuclear DNA revealed that the wisent is theoretically the result of hybridization between the extinct Steppe bison (Bison priscus) and the ancestors of the aurochs (Bos primigenius) since their genetic material contains up to 10% aurochs genomic ancestry; the possible hybrid is referred to informally as the Higgs bison...

The steppe bison gave rise to the American bison and so presumably represents a more pure bison strain. The European "bison" is actually the hybrid you desire - an acient mix between auroch and bison. Possibly your mad scientist lived in the Pleistocene?

The most obvious difference in the skeleton along the "hump".

Not the answer you're looking for? Browse other questions tagged science-based science-fiction species skeletons .

3
Ancient Aliens in the New World, when do Europeans find out?
43
How do I keep my remains safe from being summoned as a skeleton?
20
How could humanoids master forge fire without using vegetal materials?
45
How long will it take to discover they live on a moon and not on a planet?
2
Reasonably tougher humans against falls, concussions etc
5
How much could a biologist tell about an unknown creature from just a tooth?
4
I want humans to discover alien communication after they arrive in our solar system, is that possible? If yes then how?
7
Ranges of aurochs, bison and wild horses