The location of a geostationary moon in the sky?

On a planet with a geostationary moon, how can I determine the position in the sky of the moon depending on the position on the planet surface?

For example, Pluto's Charon. The moon wouldn't move across the sky standing still but if you were to move where you were on the planet, where would the moon appear to be? I imagine someone standing directly in line with it at the equator would see it somewhere else than a person standing in the southern hemisphere to the east. And as you drifted out of its view (east to west or north to south) would it slowly disappear beneath the horizon?

I'm sure this could be figured out studying one of our own satellites but I wasn't sure how to approach that.

Imagine, for the sake of simplicity, that the moon is on the same plane of the equator and on the meridian where you take the latitude 0. If you measure your latitude starting from 0 at the equator and the observer is at a latitude $\theta$, the moon will appear on the sky at an angle $90 - \theta$ 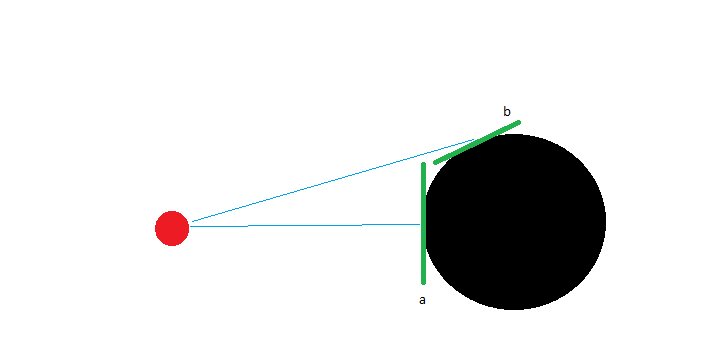 If you look at the picture above, an observer on the equator (plane a) will see the moon at 90 degrees in the sky, in other word at its zenith.

Same goes with the longitude.

Mind that when the angle exceeds the 90 degrees the moon won't be visible at all, because it will be hidden by the planet. This happens on the farthest side of our Moon, which never sees Earth.

Not the answer you're looking for? Browse other questions tagged moons .

15
How would a moon in geostationary orbit appear to wax and wane?

14
Moon occasionally appears much larger in the sky
15
How would a moon in geostationary orbit appear to wax and wane?
6
Almost tidally locked to moon and the tides it would create
5
What would the night sky look like from Luna (Earth's moon)?
4
How would I make a moon appear black in a night sky that has a nebula visible in it?
6
Geostationary moon
2
Can liquid water exist on the moons of this gas giant?
2
If Earth had a smaller second moon, what would the sky look like?
13
Countering the threat posed by a rogue Moon-spanning AI
1
Rail road on the moon aka massdriver, encompassing the whole moon along the equator. How high are the bridges? How deep are the tunnels?