I created a character who is centaur-like. His upper body is completely human however his legs and horse-like and he has two legs. This makes him similar to a Satyr, however, Satyr's have Goat like legs and horns. I haven't found a name for a Two-Legged Centaur and no such creature seems to exist in ancient mythology.

Is there a name for such a creature or alternatively, what could I name it? Centaurs do not exist in my world so I cannot use the term ''Centaur'' as an in-world reference point of naming and I don't want to use the term Centaur at all for this creature because it would fall into the ''Our Centaurs are different'' trope and become an annoyance to my audience.

In Greek mythology there is the ipotane. For the most part they were overall human-like, but with horse legs, hindquarters, tail, and ears. Excluding the ears, your creature sounds like an ipotane.

Many artist renderings end up swapping the top and bottom parts, or give ipotanes more horse-like features. It does seem, however, that the older Greek myths had ipotanes as mostly human except for horse-like legs and tail. Some reference even refer to them as precursors to centaurs, but I have my doubts about that. Tracing early Greek mythos is.... complicated.

In any case, here's one random ipotane picture I found (female, but upper body human and lower body horse): 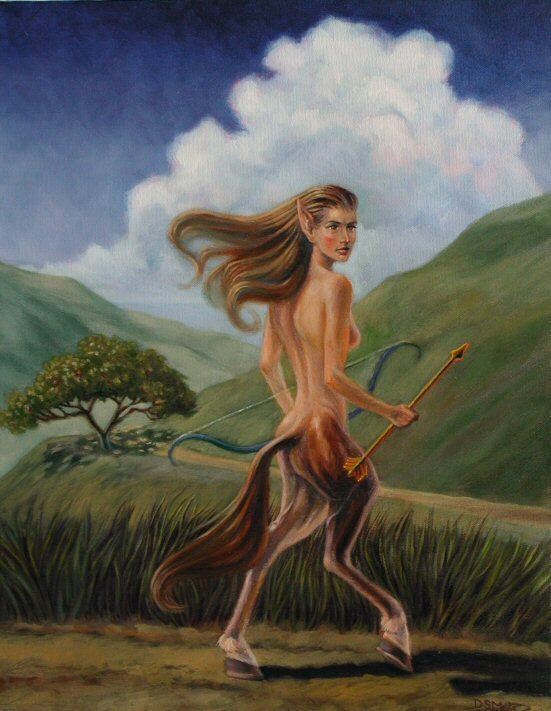 Satyrs were originally portrayed as having horselike legs, along with horse ears and tail (and a permanent boner, but that's neither here nor there). They only acquired goatlike characteristics later when they began to be associated and conflated with Pan, which was originally a completely different nature spirit.

You could call the tow legged centaurs or satyrs with horse parts Horse-men or Man-horses or Hippandres or Andreshippos or Andrehips, or something like that.

Not the answer you're looking for? Browse other questions tagged mythology .

19
Anatomically Correct Sleipnir
20
The Centaur--Let's Get Real, Shall We?
27
Naming the forces of the Purgatory?
19
If the Roman Empire in the Year 90 AD Found a Living Tyrannosaurus Rex, What Creature in Their Mythology Would They Most Likely Mistake It For?