How to protect oneself against strong magnetic fields?

Spacecraft in my Scifi setting use strong magnetic fields for many purposes. Fusion containment, magnetic nozzles, gauss guns, magnetic fields as pusher-plates for nuclear pulsed propulsion and defensive plasma-windows as well as cure-point sand casters are among the technologies using large and powerful magnetic fields.

How can I protect people (often with implants) and machines from the effects of multi-tesla magnetic fields?

Optimally the protection can be added to a spacesuit, but solutions only applicable as shielding structures would also be acceptable. Passive solutions are better than ones needing energy or constant maintenance. What are my options?

Happily, many of those magnetic fields are associated with environments that are so intrinsically hostile to everything... not just life, but even dumb matter, that really nothing other than specialised (and replaceable!) materials should be out there anyway.

Active coilguns? You're presumably in a battle, which means you're also currently doing a meaty impression of a whipple shield. Active magnetic nozzle? If the field is powerful enough to be hazardous, then the amount of EM and fast particle radiation coming out of the nozzle will be enough to toast you. Active pusher plate on a mag-orion? YOU ARE GOING TO BE NUKED! GET THE HELL OUT OF THERE!

In the same way that it doesn't make much practical sense to ask how to protect your meatbags from the blast around the muzzle of battleship-sized cannon, or from the multi-thousand-kelvin flames coming out of a big rocket engine, or the radiation coming out of a live (or recently hot) fuel rod, the simplest solution is just "don't go there". There's little you can do there that's of practical use.

That said, lets assume you do want to trick humans into becoming ablative armour or reaction mass in your nuclear engine. You can use a superconducting container to protect you from external magnetic fields, mechanical systems for controlling external manipulators and carefully designed prismatic optics to let you see out without to much of the outside getting in. von Braun's classic "bottle spacesuit" might be a good starting model for this: 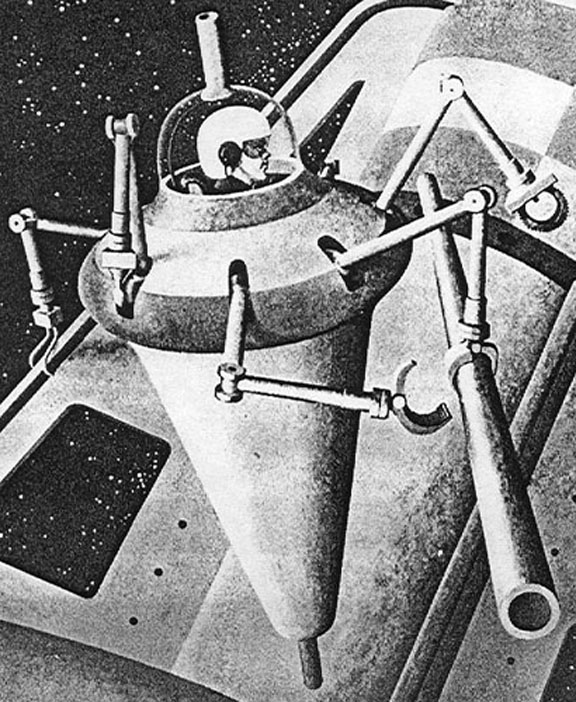 Your superconductors are likely to be rigid, after all, and you don't want them to deform in the presence of a strong magnetic field so a solid miniature spaceship of this sort is probably the way to go. By way of a bonus, such a ship can keep the same pressure and atmospheric mix as its parent spacecraft, avoiding the issues that present-day astronauts have with de- and re-pressurising before spacewalks.

At exactly the critical temperature, the critical field strength is zero. You will therefore either need super-high-temperature superconductors (handwavium) or some kind of cryogenic cooling system. This kind of extra infrastructure tips the balance further in favour of one-person spacecraft rather than wearable space suits.

Using real-world materials, you might consider YBCO, or yttrium barium copper oxide. It can have an $H_{c2}$ of over 200T, but you'll need to keep it at liquid helium temperatures to retain its superconductivity at that field strength. At merely liquid nitrogen temperatures, it should be able to remain superconducting with field strengths between 60-80T, though the effect on the occupant of fields of that strength partially passing through the superconducting shield might be problematic.

You may find yourself needing to handwave high-temperature superconductors with behaviour more like type-I superconductors with regardes to magnetic field exclusion. In its absense, consider ceramic or organic automata with nonconductive signalling systems and non-electrical power sources. Or, y'know, don't do maintenance in the middle of a pitched battle or when the main drive is lit.

There are many forms of magnetic shielding that can be placed near/around the magnetic application, or as a spacesuit. Technology around faraday cages is highly developed and frequently used in regards to strong magnetic applications (such as MRI rooms). In fact, faraday cages are frequently used by doomsday preps and military applications to protect against high-powered EMPs and/or solar flares. The type of cage (mesh/bag versus solid wall) depends on the strength of electromagnetic radiation you are trying to protect against. Even common electrical wiring in your house is insulated to prevent small amounts of electromagnetic interference.

It's important to note, however, that this is a type of XY problem - humans are not impacted in negative ways by strong magnetic fields (otherwise we would die inside MRI machines!) - biological life doesn't really need "protection" from magnetism. Furthermore, implants are usually made of plastic or non-magnetic metals, so there is rarely any problem there.

In other words, you don't necessarily need to solve the problem of magnetic shielding; plants, animals, and humans should be fine, and implants can be made which are not magnetic, and therefore safe even in strong magnetic fields.

Magnetic matertials like iron and MuMetal(tm) can divert the magnetic field by providing an easier path for the field lines but some small amount will leak through. After some field strength the material will saturate and the excess will be unaffected by the shield.

Superconductors are absolutely impervious to magnetic fields, but if the field is too strong the superconductor will quit.

These shields will experience forces in the presence of magnetic fileds, so are best suited to used in fixed structures, not as clothing.

Not the answer you're looking for? Browse other questions tagged physics spaceships magnetism protection .