What would be the most practical way to use a dragon's scales as armor?

I'm working on a roleplaying game in a medieval fantasy setting with a focus on crafting and I am having trouble visualizing how armor made from scales of creatures would be assembled; both for art and material list purposes. I wasn't able to find any good examples as animal scale isn't generally used for armor (understandable.)

In a setting where creatures existed that had scales that would be suitable for making armor, such as dragons, what would be the best approach for using those scales to make armor?

My first thought would be to use them in a similar fashion to historical metal scale armor. Metal scales are bound together with metal rings or heavy cord. Scales would have small holes punched in them for fastening and be used in place of metal. Scales of different sizes could be arranged in the way to make them most ideal to the wearer in terms of flexibility, fitment and protection. Quite a labor intensive task, but then again so was scale armor if you didn't have an efficient process.

Would both of these be viable ways to make armor using scales with their own benefits? Or am I overlooking a simpler solution?

For clarification: By "suitable for making armor," I mean that either the scales are comparable to metal in strength or have other beneficial properties (weight, magical effects, magic resistance, etc.) For the sake of the question, I'm using dragons as the example, however I am intending for their to be other scaled mythical creatures that armor can be made from.

Remove suitable scales and reattach them in a durable way using links or cord. 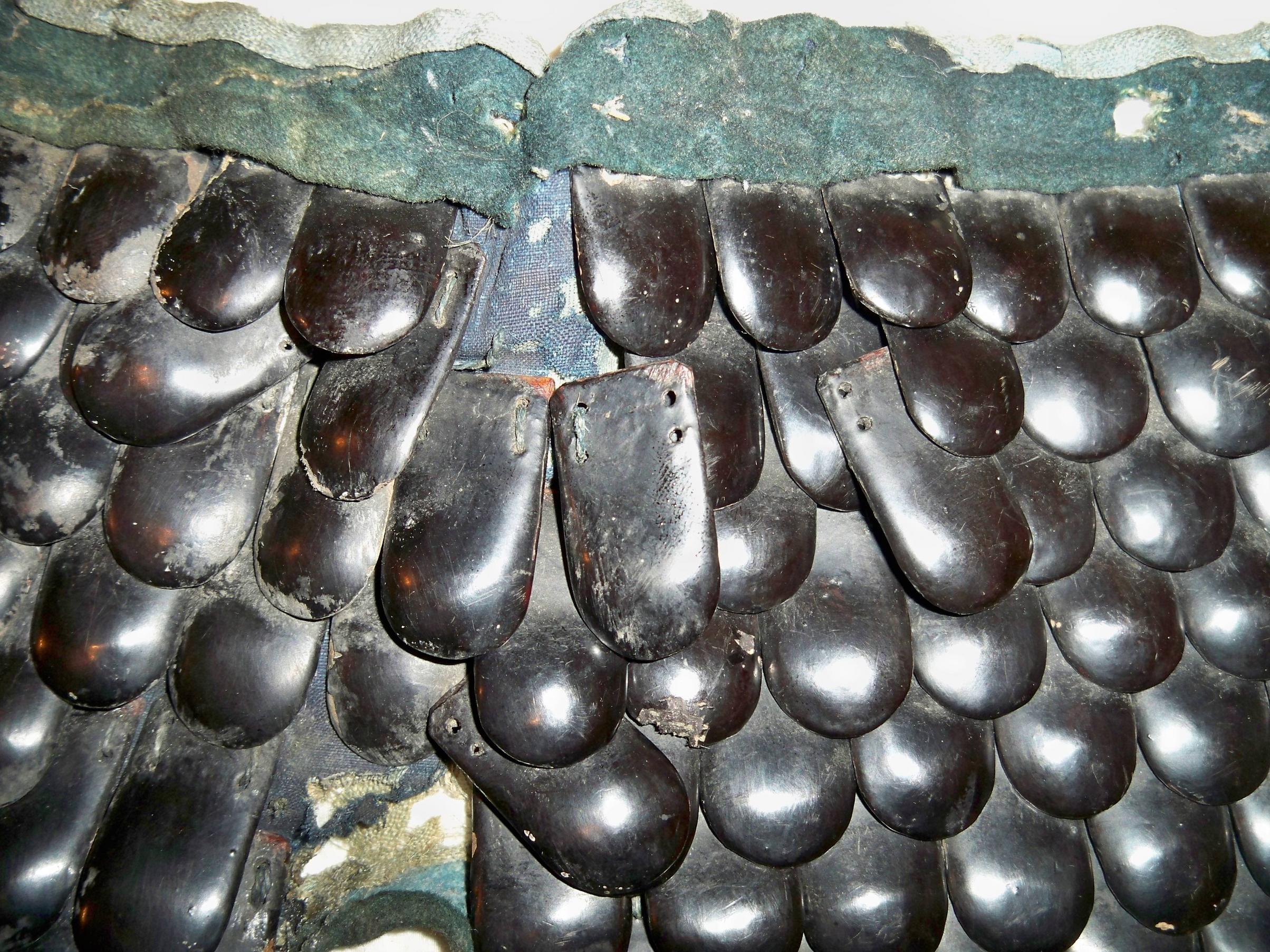 Depicted: scale mail made of leather scales. These synthetic scales are good because of uniformity of size. Also, a synthetic method of attachment means the mail owner can repair the armor in the field by sewing or attaching spare scales to replace damaged ones.

The natural attachment of scales to skin might be via organic structures which do not weather as well as the scales do. The scales will get loose and tend to fall out, like teeth from a skull.

If the function of the mail were purely ceremonial you could use a whole skin, like this crocodile scale armor. 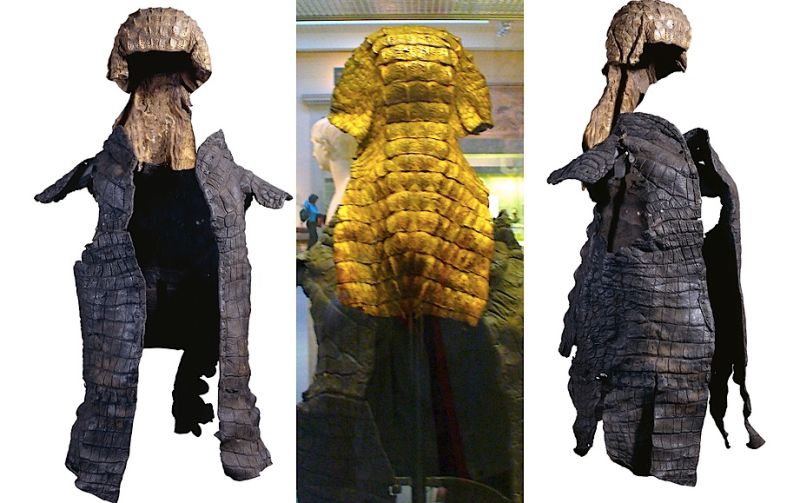 The source article states this armor was used in rituals for the Roman/Egyptian crocodile cult.

I don't think the second solution would be practical, though you can always just make it possible by saying "so dragon's skin has these properties and can be used in these ways."

First one was viable except for the fact that dragon scales are generally considered the strongest material and cannot be damaged. How can you make holes in them? You would need good explanation there.

My answer is to create a new crafting method. this is a fantasy world so the crafting should also have something different from normal. You can use special fire that can melt scales or even a magic system for this purpose. Or maybe a special glue that can attach the scales to a metal or leather surface. Or maybe inscribing the same rune on all of the runes will make them stick together.

It depends on the premises and restrictions you set.

This will depend on what kind of scales the dragon has.

An easy way to make it specials is to consider if they have steel that can cut dragon scales why are they using dragon scale instead of that steel. So make the dragon scales harder/tougher than steel. You may say only adamantine can cut dragon scales but dragonhide is easier to come by than enough adamantine to make a full set of armor. Your players may have to have a quest just to find adamantine tools or an armor make who has such tools. Alternatively you could require that they use diamond tipped tools, magic, or the dragons own teeth to drill the scales.

Consider also how you dragon scales work, if they work like most reptile scales they are just thickened skin, that is the scales and skin are one contiguous material. Crocodilians have bony core to their scutes although the covering is the same. Fish scales are often made of enamel like teeth and they grow out of the skin and can be individually pulled out and overlap naturally. Emulating fish scales may be your best bet, since they are made of the hardest material available in the body.

Finding a dragon that is already dead is much safer than trying to kill a dragon or trying to get scales from a living dragon against its will.

If finding a dead dragon isn't possible, the next best thing would be to try to scavenge any scales that might be shed by a living dragon. One might have to try to trade gold for dragon scales.

Scales connected to each other with cord or rings is called Lamallar, if you are interested in that method, direct your research to that term. Standard scale armor is attached to a backing, cloth, leather, or rarely a shirt of mail. That likely makes more sense than leaving it on the original skin, the scales falling out sounds like a very realistic fear.

How to craft it in a way that seems cool without magic? Your tools need to be of an alloy that can maintain some strength at high temperatures, then you work the scale with glowing hot tools. The heat softens the scales enough to make the holes.

Another idea... If the dragon has large scales, like shield size, you could use one scale as a breastplate and one as a backplate, carving the edges to fit for mobility, and adding straps.

Not the answer you're looking for? Browse other questions tagged biology mythical-creatures armors low-fantasy .

4
What would self-repairing armor be made of?
7
What Limitations or Modifications Would Medieval Armor or Weapons Have if Modern Quality Steel Were Used?
63
What kind of natural armor would stop bullets?
16
If it could be shaped, would chitin from giant insects make decent body armor?
2
What Is the Most Efficient Way To Kill An Evolved Chomper?
9
What would make Orcs wear less armor?
1
What Adaptations Do Viji Need To Survive On Mountains?
0
Explaining Falscale