I don't think I have to explain, but a Ouija board is a board with the alphabet, numbers 0-9 and the words yes, no and goodbye written on it. It comes with a planchette to spell out the messages. Participants place their fingers on the planchette, and it is moved about the board to spell out words.

The actual fun comes later when you play Truth or dare? to find out who made it spell "Reinstate Monica Cellio". The game is trademarked by Hasbro, but in exchange they also get the lawsuits from soccer moms because little Timmy is now Valak's free real estate.

Now there is this post-apocalyptic world with magic, swords, sorcerers and dragons. There's also an unhealthy dose of creepypasta injected into it.

In this world, the Ouija board actually works and is able to communicate with things from the other realm. These include deceased people (like XXXTentacion) and, of course, demons. However, I can't understand:

I mean, you're in a predicate where even Dragon Jesus afraid, then say

As they're catapulted back straight into Hell.

Why goodbye? It's not the n-word, it's not even a racial slur, or anything offensive. It doesn't carry any power. Misgendering the demon would have more power! (calling a der a das)

So, those two things (summoning and dismissing) are somehow connected. But I can't figure out the reason behind either. It's clearly not magic, magic is all about either bending the four elements to one's will, or magical sunlight punches here. Yet, there has to be a logical and plausible explanation. 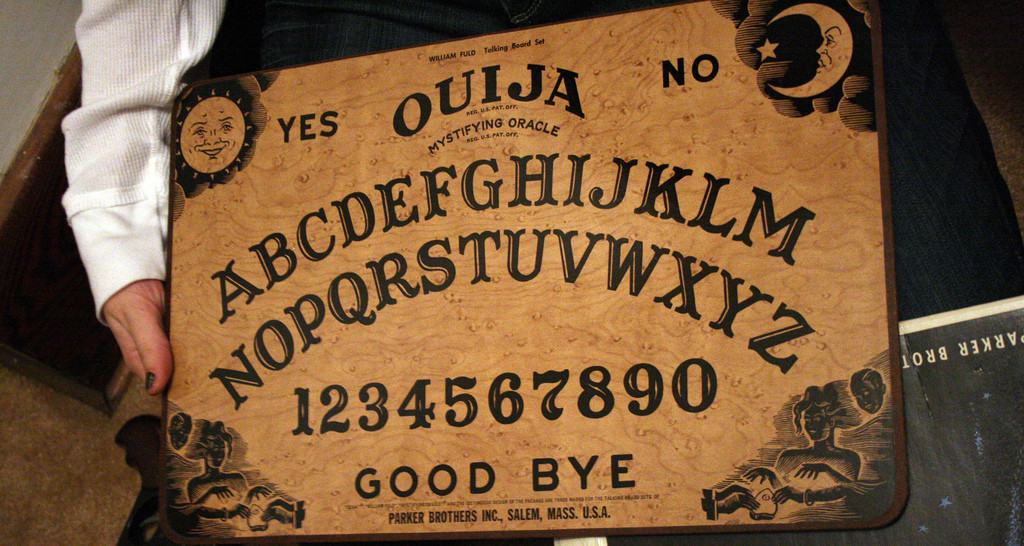 Note: I was inspired by this question.

Powerful demons can exercise some control over humans - even from hell.

An Ouija board only works when several people place their hand on the planchette. This is because the demon combines a very minor control over all of the people touching the planchette, synchronizing their minor twitches and shakes to make it move around the board. The humans may not even realize it, but as the "invitation" of the demon to take control is extremely minor, this manner of communication is relatively safe compared to an actual summoning - the control is so weak that a single person won't even enable the demon to move the planchette coherently. For this very reason, if enough users decide to force the planchette to the "Goodbye" mark, they can overcome the demon's control and symbolically withdraw their negligible consent for being controlled.

So as long none of the users is exceedingly evil or has already taken further steps to invite a demon's control - the communicating demon can't do much more than feebly move the planchette around.

Obviously, repeated use for communicating with the same demon may have unwanted side effects (including gradually strengthening that demon's control over the user, or allowing the demon to trick or corrupt the user through words), but post-apocalyptic-Hasbro aren't advertising that aspect enough.

The mystical object you define as a "Ouija board" is merely a projection onto our 3D space from another N-dimensional space wherein the "demons" reside.

Your apocalypse, whatever it was, also revealed the multiverse. It caused realities to collide, scrape together, and/or merge. The "Ouija board," as everyone so naively calls it, is actually a conduit between our reality and another.

Information can flow either way across the link. This allows the Others to influence actions in our reality (moving the planchette), while the thoughts of those touching the link are transmitted back to the Others. Remaining in contact with the link allows more and more of the Others' influence to seep into our reality, letting them move larger or more distant objects. "Mousing over" the "goodbye" message sends the idea of "terminate this link" backwards, pushing the two realities apart.

So, where were the Others? They've always been around. Only, until the apocalypse occurred, they didn't have a way of interacting with the particular flavor of three-dimensional reality we inhabit. Then someone found a way to shape and market these amusing objects that started showing up one day, and now they're all over the place.

I'm providing an answer because this is the type of thing I like to devise for my own worlds. However, as I mentioned in comments to the question, I have concerns that this type of answer is more do my work for me than how can I achieve a goal, but was unable to put into words those same concerns. I've answered this type of question before, but the site's scope has changed since then.

Not the answer you're looking for? Browse other questions tagged demons or ask your own question.

148
You can control a Demon by knowing its True Name, but why?

3
How can a demon's soul be purified while retaining its arcane abilities?