Scenario :
Due to the effects of a magical overload, there are people in my world who lose their magic. Those that don't go outright insane are left with damaged nervous systems and a high body temperature for the duration of their lives. This is supplemented by an increase in physical strength and endurance, partially due to increased ability to gain muscle mass, broken limiters, and magical handwaving stuff.

The big question I have is how would it effect the human body to be in a long term state of mild fever (38.5-40 C) for the duration of their lives?

Primarily what would their mental state be like, and what body systems would be struggling the hardest due to increased core temperatures? Would anything physiologically need to change to allow them to survive for a long duration (10+ years)?

A scientific article from the US National Institutes of Health titled The pathophysiological basis and consequences of fever gives a good review. From the abstract:

Where heat generation exceeds heat loss and the core temperature rises above that set by the hypothalamus, a combination of cellular, local, organ-specific, and systemic effects occurs and puts the individual at risk of both short-term and long-term dysfunction which, if severe or sustained, may lead to death.

It goes on to describe damage caused by fever in three main categories: (a) cellular damage, (b) localized effects (vascular stasis, inflammation response, etc), and (c) systemic effects. These are summarized in the following graphic: 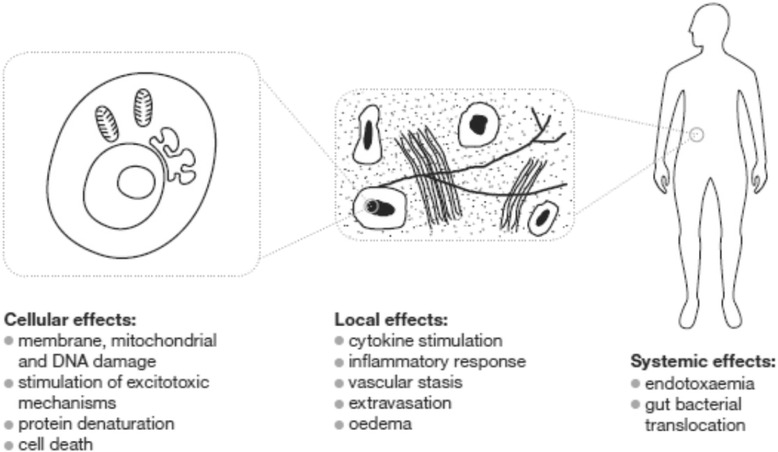 While direct cell death occurs around 41 C, protein and DNA synthesis is disrupted at lower temperatures. This means cells replicate more slowly (or not at all). This makes sense: your body normally achieves a fever state for fighting off infections, so activating your immune system and slowing down the ability for cell growth is helpful. Chronic, long-term fever would mean more stress on organs (including organ failure), a slower repair rate for bruises and broken bones, et cetera. It would also mean, with some caveats, a lower risk of infection (because foreign invaders would not be able to replicate as easily. Furthermore, gut flora would also have difficulty replicating which means more stomach aches and problems with digestion.

All of these effects kick on pretty quick (they can be measured after 30 minutes of mild fever in animal studies), and are inconveniences in the short term (up to a few days), but chronic, long-term damage would likely result in serious organ failure and death. The article goes on to describe damage to neurons (cognitive dysfunction), issues with the cardiovascular system, serious liver damage, haemostatic system issues (how the blood coagulates in muscles and damaged skin), and so on.

In heatstroke (which is temperatures above your quoted range), a 28-day mortality rate was 58%, and a whopping 71% at 2 years. Furthermore, 33% (one in three) survivors of heatstroke have some moderate to sever functional damage, and 41% requiring institutional care after a year. Granted, this would be temperatures above your quoted range, but I would anticipate similar issues with lower fevers at longer times (such as 10/15 years).

Take into account the increased rate of water and caloric expenditure, and decreased ability to metabolize food, and your people would have to eat and drink a lot while dealing with fatigue, mental issues, organ failures, and cancer.

Chronic infection can cause chronic fever. Of the chronic diseases that cause fever, the big three are malaria, tuberculosis and syphilis.

Notes on the Significance of

Fever in Syphilis with a Reference to Hypopyrexia" fever...may be accompanied by various symptoms including generalized muscle pains and gastric disturbance; suggesting typhoid and paratyphoid fevers. These latter are not uncommon in syphilitics in the secondary stage ; in a patient without marked gastric upset, in good general condition with a clean moist tongue suffering from this type of fever, syphilis must be considered. This continuous fever rarely :persists longer than six or seven days, but sometimes a true syphilitic fever lasts two or three weeks, or shows 2 or 3 plateaux each lasting about seven days

Syphilis has a lot of weird symptoms that are not well remembered now and would serve well in a fiction - examples being mental disturbances, neuropathy, rash and a host of others - syphilis is called "the great imitator" because of all the different symptoms the infected can manifest. It would be understandable if you did not want to actually use syphilis because youi consider an STD inappropriate for your fiction. But you could definitely have your people have a chronic infection.

Chronic cancer is another reason for fever - persons can live for years with low grade lymphomas, which cause lumps and bumps and intermittent fever. I think the white-skinned transfusion dependent warriors in the Road Warrior remake were supposed to have lymphoma because many had a lot of lymphadenopathy in their necks, and lymphoma can compromise blood production in the marrow.

Fever means you burn calories faster and water evaporates from you faster; tjhere is a greater risk for dehydration. Higher fever can break down muscle - rhabdomyolysis. Fever can cloud the mind but these folks would be used to that. They might sit out the action if they were having a high fever day or they might chew willow bark for the natural antipyretics in it; willow bark was the precursor to aspirin which is excellent at lowering fever regardless of the cause.

Not the answer you're looking for? Browse other questions tagged biology humans health or ask your own question.

5
How would a creature with a higher body temperature interact with surroundings?

5
What would be the short-term and long-term effects of an increase in the strength of gravity on humans?
6
Rare and long-lived humans
5
61 Virginis Mission Design: Long Term High Gee Acceleration and the Human Body
4
The 3% long term consequences
3
Effects of changing environments in humans
6
Minimum Gravity for long term living
3
Long term living without sunlight
1
Making a Predator For Wild Anklebiters