Basically, I have a creature that is larger than an average human, and smaller than a bigger shire horse. So, size is adjustable. The bodyplan is similar to that of a horse, except for a longer neck and a powerful tail for ranged attacks.

This animal was supposed to be fighting humans armed with various firearms, basically anything that is less powerful than a .50 BMG, .50 BMGs can more easily be disabled by magic, so they're not playing.

This animal can only use its natural abilities, aka, no tool-making or calling Sly Marbo for assistance.

These creatures, while biological, were designed by a great intelligence, so you're allowed to use anything a living creature theoretically could.

These creatures were designed to be able to handle a firefight and weren't designed soley for it.

What adaptation would be the most effective for these creatures to be able to defeat the human most of the time?

The human does not realize the creature is there until too late. 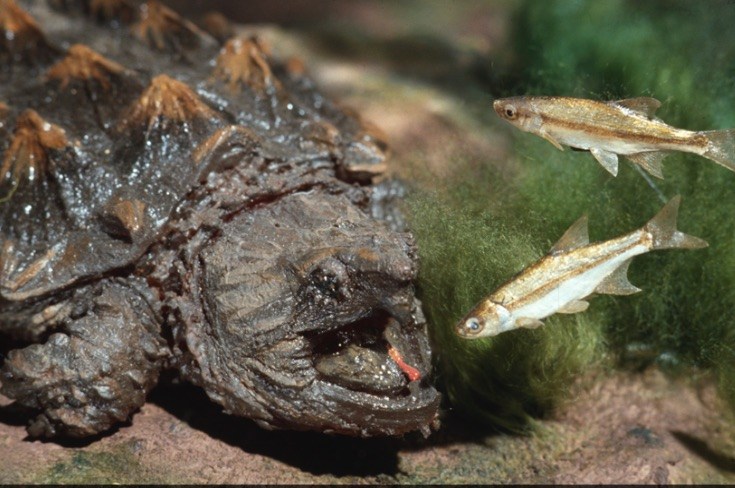 Your creature is very well camouflaged, in the manner of an octopus. It may have also acquired some items from the environment which are affixed to its body, ghillie-suit style. The human can see it but does not realize it is a living thing. The creature does have one very visible attribute, which can be used to attract attention and draw things near, like the alligator snapper in this turtle - its tongue looks like a red worm and fish come to investigate.

The creature is not bulletproof. They defeat the humans because the humans get close without realizing what they are getting close to, and don't get to fire their weapons.

In encounter with an actual bear in described situation shooter is doomed.

The reason is very simple (and also applies to, say knife, fight between humans): deadly wound is not a stopping wound. Deadly shot bear is cappable to fight in full strength (and even more due to rage) for several minutes (and even several hours). And in 1-to-1 fight human has no chances against bear in any gear (in described situation bear would just break person and eat off his head).

And it close to impossible to inflict deadly wound to bear with low-caliber weapons. Even shots from AK to head is not capable to penetrate bears skill. Most handgun shots couldn't penetrate its skin! Only very expirianced hunter with appropriate gun and ammunition can kill bear with 1-2 shorts. Soldiers guarding outposts at bear-intensive places are specialy instructed not to shoot bears in any situation.

So my answer: RL bigger animals like bears, tigers, large boars are already more than cappable to fight effectively against humans with firearms because of "rage mode" wich allows them to fight wounded and even deadly wounded

Bears still kill tens to hundreds of humans annualy. And a considerable parts of this humans were armed with firearms.

There are really only three possible adaptations that would make sense for the animal in this scenario:

If the creature does have these sorts of attributes, the shooter will need to carry a suitable weapon, such as a Milcor grenade launcher, AA-12 shotgun (possibly with 12 gauge explosive rounds and a 28 round drum magazine) or MG-42 machine-gun with a 75 or 100 round belt carrier attached. The 1200 RPM firing rate will certainly do a number on whatever is hit. Whatever weapon is chosen should have a "reflex" sight for maximum speed of acquiring and engaging the target.

Forget blindingly fast reflexes, but instead consider merely blinding. The human can only shoot you if they can see you, so, barf up a mixture of exciting chemicals capable of generating a very bright flash of light. There probably isn't a good biological mechanism for a reusable flashlamp organ, so limited reserves of light-generating chemicals are probably the order of the day.

These could be followed up (or replaced) by something that generates a thick cloud of black smoke, ninja-style. Fart out a big smokescreen, and circle round, flee, or wait for the human to run out of ammunition as you see fit.

5
Which will survive better, a duck-sized horse or a horse-sized duck? What about the other creatures in this magical world?
9
At what point does sensitive hearing become a hindrance instead of an advantage? (For a predator.)
7
How does a collective consciousness species avoid overpopulation?
24
What would a creature with very powerful and accurate throwing ability look like?
26
Are dragons useless when there are guns?
4
Small elephant like animal which can curl itself into a ball and move around by rolling on itself, and it can set itself on fire
2
How big should a living life-support machine be?
6
The effect of extra limbs to an alien creature's speed