Is it possible for a large planetary body to embed itself onto the Earth?

With the proper composition and mass, is it possible for a planetary body to collide with Earth and embed itself onto the mantle?

To clarify, while immense destruction would undoubtedly occur to the hypothetical body in question, could such an event produce a visible landform such as a plateau or mountains?

No as L. dutch pointed out impactor either leave a crater or liquefy completely,

however there is a way to get a plateau on the opposite side of the plant from an impactor.

With a large impactor the shock-waves coalescing on the other side of the planet can trigger flood basalts, which can form plateaus. in fact a large number of plateaus are created by flood basalts directly or the differential erosion of flood basalts.

I sense some confusion in your question.

The mantle lays deep below the crust, therefore if a body goes into the mantle won't be visible on the surface. 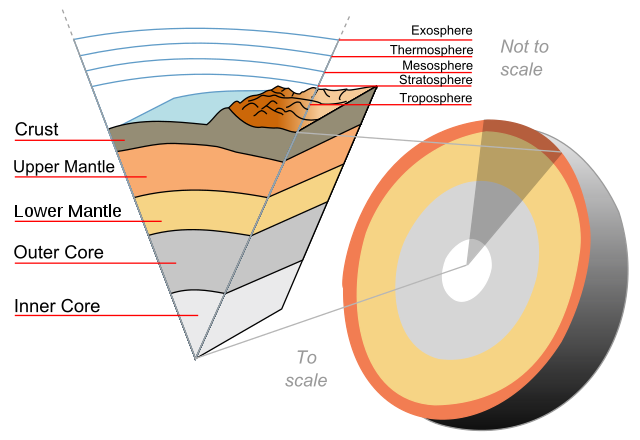 But let's proceed with order.

As you correctly guess, an impact with a planetary body will bear large destruction. The energy at stake is so large that the entire planet would be melted. As a consequence of the melting, the liquids would stratify according to their density: denser materials would go down, lighter materials would float.

Therefore, if the colliding body was made by a high density material, like iron, it would sink, going into the mantle or below, into the core.

Moreover, since the whole planet would be liquid, there is no chance that surface features higher than the average level would be permanent. For that to happen, you need a solid crust. But once that is present, stratification has already worked.

Not the answer you're looking for? Browse other questions tagged reality-check astronomy asteroids or ask your own question.

15
What would we see of a devastating interstellar war between alien civilizations within 1000 Ly?
13
Does a planet's axial tilt and seasonal progression affect a planetary-ring system, as seen from the planet surface?
22
Reality Check: Habitable moon around earth-like planet
9
Could you turn the asteroid belt into one giant full spectrum interferometer?
3
Immune resistance to biological colonisation
13
Are Trojan Planets Possible? Are Habitable Trojan Planets Possible?
2
Reality Check - Collision of a Moon prevented by turning it into a ring
4
Possibility of a “hot Mars”