Is it possible to surf on molasses?

I recently came into possession of a rather large mass of molasses due to a misunderstood Alexa inquiry and since the restocking fee is outrageous, I plan on using it to answer a nagging question I've had: is it possible to surf atop a body of molasses?

I've got approximately 1.898 × 10^27 kg of the stuff in a stable orbit around an M class star and I've got the tools necessary to manipulate it around physically, but I don't want to have to be actively stirring it or anything to get this to work, that would seem like cheating. I'm having an atmosphere along with an ozone layer added to it next week since I'm not very good at surfing and wearing much beyond a wet suit would probably make it more challenging than I'm prepared for.

What should I do with this to make it surfable? Like with cresting waves of sufficient height and velocity to propel me and my surfboard across the surface like how surfers do it on water?

If it matters, it's Plantation Blackstrap Molasses, Organic and I've already removed it from the containers it came in (another reason I can't return it).

Ideas for what to do with this afterwards are welcome as well.

As a matter of fact, there was, once in the distant past, a very tiny ocean of molasses here on Earth, and at least one person came pretty close to what we'd call surfing on the big wave.

It was back in 1919 that an actual tsunami of molasses swept across a rather modest section of Boston Mass on one cool winter's day. A large tank of the stuff exploded, sending almost nine million litres of the stuff flowing through the streets. As with large waves of water, the singularly sweet tsunami carried all manner of debris with with, including broken bits of the metal tank, horses, whole trucks and a large number of people. 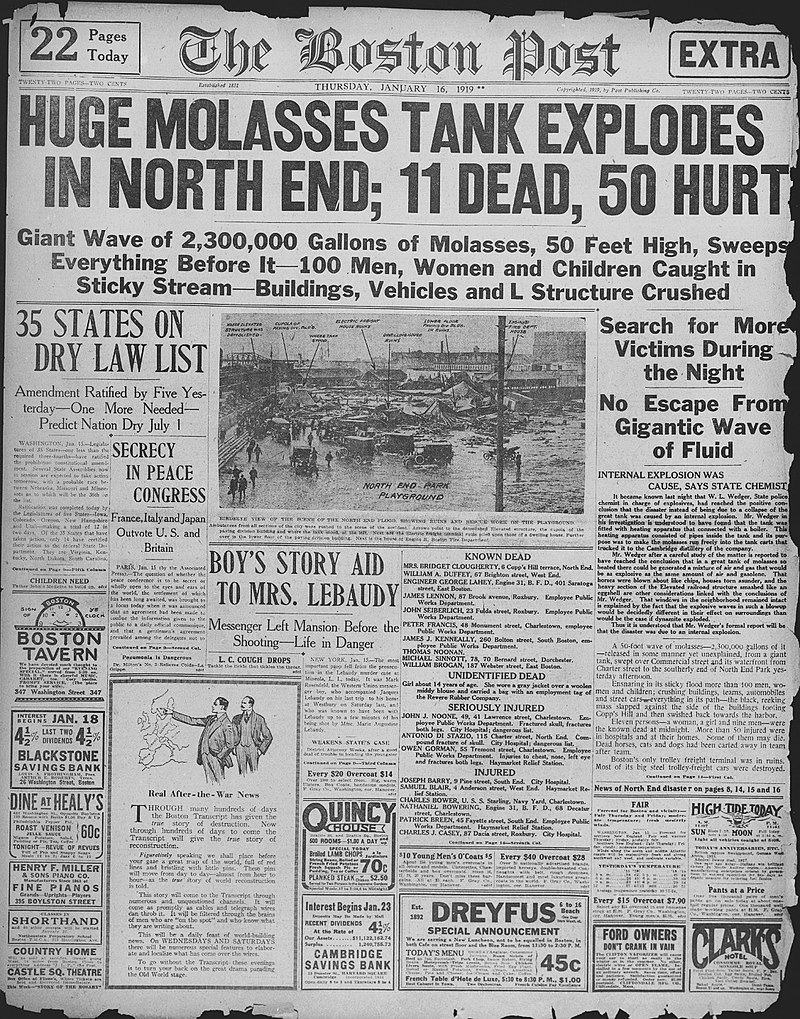 The tank was 15m tall and 27m wide; the day was cool and the molasses had been warmed to facilitate transfer. Upon bursting, the wave of goo was about 8m high and moving at 55km/h; it shifted several buildings from their foundations, damaged a railway bridge and flooded several blocks to about 1m in depth. (WP article)

Of interest one young boy "was picked up by the wave and carried, tumbling on its crest, almost as though he were surfing. Then he grounded and the molasses rolled him like a pebble as the wave diminished."

Molasses is rather denser than water (it being essentially sugar), and while the old bromide would have us believe that molasses runs slow in January, history provides the truth of the matter. Warm molasses does indeed flow, and when there is sufficient volume, it flows rapidly indeed.

It is perfectly possible to surf on molasses. The surfer does, however, need to take precaution as regards molasses temperature & viscosity. If Molassesworld is kept uniformly warm and balmy, surfing conditions should be reasonable, supposing the Bleucheese Moon provides sufficient tidal action.

Once the temperature of the molasses decreases sufficiently, its viscosity rises, creating for the would-be surfer a red-over-red condition: Jamaica Beach closed due to congealed conditions in the Molasses Sea.

This answer states that, once you got a wave, you can surf on molasses.

But can you get a wave?

Best surfing spots on Earth happen where the morphology of the sea bottom is such that if forces the water above to form a large and high wave. The famous spot in Portugal where people bet their life surfing 30 meters high waves is right on a canyon which channels the water. Same for the bowl in the Hawaii.

And here you have the first problem: your planet is made only of molasses. You have no rocky or sandy bottom. With decreasing temperature you have just a more viscous molasses.

And here comes the second problem: you can't have even large open sea waves. As I stated before, at a certain depth the molasses will be too cold to have a decent viscosity. So you have a rather shallow layer of liquid molasses over a thick layer of more viscous molasses. (let's not venture into what happens deeper in the planet). On this shallow layer the winds will have a limited effect, and that effect will be dampened by the viscosity.

Discard almost all of it

You've got a Jupiter-sized mass of something which is only about 10% more dense than Jupiter, so you're looking at about 2.5g on the surface. That's going to put a damper on wave cresting and ease of surfing. On the other hand, you've got no landmasses to break up winds or currents and the atmospheric pressure at the surface is going to be much higher as well, so the winds and resulting waves will be quite impressive. So you're basically attempting to surf in a major hurricane while weighing 2.5x your Earth-surface weight.

If you drop down to something more like an Earth mass (~5.97x10^24kg), or even Earth-size (resulting in lower surface gravity due to the lower density), you'll have a much easier time of it. Maybe use some of the leftover to put a moon around it and get some tidal action going, but again, the lack of anything resembling a beach or shore means that waves will build up on their own just fine from atmospheric action alone. They just aren't likely to break since there's no shoreline.

Not the answer you're looking for? Browse other questions tagged reality-check physics materials or ask your own question.