Dragon fire As Powerful As Possible

So we have seen questions stating or asking how a dragon could breathe fire. Although, I want to know what substance would make it as powerful as dragon fire could be. I envisioned a biological napalm that was slightly viscous and stuck to the target continuously burning until out of fuel, but a dragon constrained by earth's gravity and biological laws wouldn't be able to carry enough fuel to burn town a city. So my question is what substance would make dragonfire as potent and powerul as possible?

Edit: By powerful I mean what flammable substance could do the most damage with the least amount of weight. With damage being widespread flame or and extrenely hot flame. Basically I want to see what substance can give me the most "bang for my buck."

(Bonus if it can melt stone given enough time)

What you want is florine or more specifically dioxygen difluoride (FOOF).

“Being a high energy oxidizer, dioxygen difluoride reacted vigorously with organic compounds, even at temperatures close to its melting point. It reacted instantaneously with solid ethyl alcohol, producing a blue flame and an explosion. When a drop of liquid 02F2 was added to liquid methane, cooled at 90°K., a white flame was produced instantaneously, which turned green upon further burning. When 0.2 (mL) of liquid 02F2 was added to 0.5 (mL) of liquid CH4 at 90°K., a violent explosion occurred.” - https://pubs.acs.org/doi/abs/10.1021/ja00893a004

Or if you want further reading, Things I Won’t Work With: Dioxygen Difluoride

Hydrogen sulfide, for example, reacts with four molecules of FOOF to give sulfur hexafluoride, 2 molecules of HF and four oxygens. . .and 433 kcal [per mole], which is the kind of every-man-for-himself exotherm that you want to avoid at all cost. The sulfur chemistry of FOOF remains unexplored, so if you feel like whipping up a batch of Satan’s kimchi, go right ahead.

Now if you're after various fires that can't be put out or other substances that effectively detonate at 100K the Things I won't Work With blog will probably keep you happy for hours. I suggest you start with Sand Won’t Save You This Time

Let’s put it this way: during World War II, the Germans were very interested in using it in self-igniting flamethrowers, but found it too nasty to work with. It is apparently about the most vigorous fluorinating agent known, and is much more difficult to handle than fluorine gas. That’s one of those statements you don’t get to hear very often, and it should be enough to make any sensible chemist turn around smartly and head down the hall in the other direction.

There’s a report from the early 1950s of a one-ton spill of the stuff. It burned its way through a foot of concrete floor and chewed up another meter of sand and gravel beneath, completing a day that I’m sure no one involved ever forgot.

Not the most dangerous of substances, (though, please don't get me wrong - it's plenty dangerous) but I wanted to pick one which wouldn't kill the dragon in the process of exhaling it. It's a simple liquid made up of N2H4, but reacts very violently when catalyzed, typically using a sheet made of iridium and aluminum oxide, forming hydrogen gas (flammable), nitrogen gas (non-flammable), and ammonia (flammable). The reaction is exothermic to the point where it apparently results in a tempature of 800 C in milliseconds. It creates a vast amount of hot gas from a small amount of liquid, and quite unsurprisingly, it's used as rocket fuel.

The other nice thing about it is that it can be synthesized from ammonia and hydrogen peroxide. And ammonia products happen to be a waste product of most life on earth, meaning it's plentiful. Hydrogen peroxide can be synthesized from quinnones using oxygen and hydrogen - the anthraquinone process. No rare elements like Fluorine that the dragon needs to get - this is honestly a natural by-product. The catalyst means that the dragon can choose to only turn it into fire upon hitting the air - maybe using it's teeth to host the catalyst, or something of that nature. It does happen to be fairly toxic, a likely carcinogenic, and thought to cause birth defects. Also, if ingested, symptoms include, but are not limited to: cough, burning sensation, headache, confusion, drowsiness, nausea, shortness of breath, convulsions, unconsciousness, burns in mouth and throat, abdominal pain, diarrhoea, vomiting, shock or collapse. But it's a dragon, so it'll probably be fine.

Why do you want flammable material? The most powerful weapon on earth uses water as it’s fuel (deuterium, actually). Make your dragon’s breath a thermonuclear bomb (it’s very small, & very easy to distill the fuel from regular sea water). 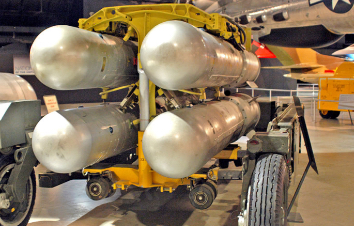 The dragon only needs to have lithium deuteride in his mouth, and lots of heat, and he becomes Godzilla.

OK, let me be clear. When I say lots of heat, I mean the kind of heat you find in the core of the sun. In the real world - you need 100,000,000° for this reaction. So, figure out how your lizard can survive that, and this is the most powerful dragon possible. (That was the question, right?)

In real life we use very powerful magnets to prevent the heat from melting a fusion reactor. So can you give your lizard some magnets? I mean BIG ones? Insanely powerful big ones?

And yes, he will melt stone very very easily.

A good mix of different reagents would be very potent. Fire off different substances in sequence. Best have those materials as hot as possible to ensure the maximum reactivity as chemical reactions are accelerated at higher temperatures.

I suggest starting the fire fest with Fluoroantimonic acid. That should dissolve most things by virtue of the fluoronium ion H2F+ This substance is so reactive it is even capable for forming tetraxenonogold a compound of gold and Xenon, which is about as weird and unstable as it gets. It would not take kindly to any normal substance.

As an additional advantage Fluoroantimonic acid decomposes into hydrogen fluoride (very nasty) and Antimony pentaflouride. Antimony pentafluoride has the dubious privilege of being the first compound known to release fluorine gas from fluoride compounds (not healthy).

This should be enough to finish any material substance. But if you really want to push the boat out follow up with super heated Oleum which is sulphuric acid with added SO3 that absorbs water to form even more sulfuric acid.

Any solid substance remaining (unlikely) could then be subjected to molten jet of Caesium and Lithium Aluminium hydride. It would not end well. Organic matter, steel, plastic and glass are all going to end up as salts. And with added water (duh!!!) very hot solution of those salts.

Note your stone is now gone. Silcon dioxide > Silicon tetrafluoride (volatile and subject to hydration), Magnesium, Calcium, Aluminium, Iron (and the rest) are now present as flourides and sulphates

well, chlorine trifluoride would turn many things into a fire fuel which normally dont burn, glass is a good example, once you ignite it, you could make human flesh a fire fuel, and no, when you burn a human, with normal fire, flesh heats up very high, but it does not catch fire, with this, it would

edit: you could also use aqua regia, nasty stuff, as well as the materials listed above, also, water+chlorine trifluoride = explosion

edit on edit: not sure if water vapour does the same, but this would mean you need no way to ignite it, it ignites by itself, and if spued quickly enough, well, you get it

another edit, magnesium and potassium, one to blind, one to make the flame much hotter

-4
How could an ability to project fire from your body occur plausibly?

61
From which point on would including a dragon on one side of a historical battle not be an instant victory?
29
Can a dragon's fire breath be liquid based?
18
Why would a fire dragon still be afraid of torches?
4
Anti-Dragon armor, shields and melee weapons
29
Why wouldn't dragon-hide make me fire-resistant?
12
How could dragon society avoid interacting with humanity?
7
Generic hypergolic components for a carnivore?
4
Making a portable fire flute with thermoacoustics
4
A Dragon with Ignition abilities