What element, if any, would justify mining stars (financially)?

Alright so in my sci-fi a prominent corporation dominated by the Borlak species (Mantis-like Hexapods). The Borlak make their money by mining "dead systems", solar systems without any habitable planets or any planets worth terraforming or colonizing. Which they, after taking the best materials for themselves, charter out to other corporations or prospectors.

However the Borlak now want to tap into the stars of these dead systems. I know stars are made of mainly hydrogen and helium, but I was wondering is their any resource/element able to justify the hassle of mining stars?

Note: I know they could just build a dyson sphere, but I want them to physically mine the star for something.

Tech level is: fusion is common. Antimatter is a thing, but very rare and heavily sanctioned. Construction of Dyson spheres is possible but still a monumental project.

I don't think traditional mining would be possible at all.

And this would be the same for any element you tried to use on the surface of or inside any star - the metals and alloys would melt and become unusable as mining implements.

So mining a star would be impossible.

What would you mine a star for?

Well considering the technology level of your Borlaks, they would probably find rarer elements to be more expensive and valuable. Hydrogen and Helium are plentiful in space. Any space faring race capable of dabbling with anti-matter and scouring entire planets for resources would be able to collect these elements in vast quantities with ease.

But Hydrogen and Helium are the smallest elements. The larger the element, the rarer it becomes - Uranium for instance, one of the largest elements, can only be created in the very largest of Red Giants, making it one of the rarer elements in the universe - so there may be some financial gain in harvesting larger elements from Red Giant Stars, instead of having to wait the (potentially) millions of years before these gigantic stars go supernova.

So now that we have established not only that mining wouldn't work, but there would be good reason to "mine" elements from stars, what are the options of the Borlak race?

I would suggest siphoning the star. Literally sucking part of the star away into space, so the elements from the star are colder and can be harvested in a cooler environment. By sucking up the contents of a star the Borlaks could get at the bits they needed without having to operate within the extreme temperatures of a star.

The only problem is the immense gravity of a Red Giant. The gravitational pull of a star that big would be far greater than any "space-vacuum" the Borlak's could develop.

However, there are things out there with a greater gravitational pull than Red Giants... 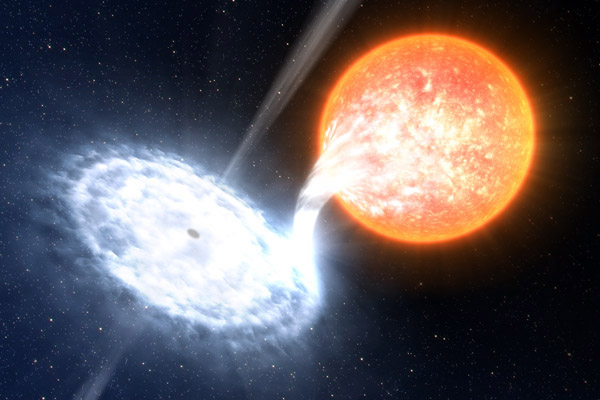 Of course, this wouldn't be easy. The Red Giant star would have to be very close to a Black Hole for this to happen, making life very difficult for the Borlaks - falling into the event horizon would be a huge risk, and once they do there would be no escape.

Also, this wouldn't be plausible for just any star - only Red Giants would make the elements you wanted.

And this wouldn't be plausible for any Red Giant star either - you would need to find one that is right next to a Black Hole.

But with the right conditions, and with enough care and sufficient technology to pull it off, it may be possible to harvest what you want from a star in this fashion.

No, there's no such element that would justify this sort of attempt.

We have data on the composition of the Sun's photosphere, one of its outermost layers. By mass, the solar photosphere is 98.3% hydrogen and helium. Oxygen and carbon compose another 1%, followed by even smaller quantities of iron, neon, nitrogen, silicon, magnesium, and sulfur - all elements found in Sun-like stars in these amounts. None of them are particularly precious or hard to find on Earth; they're certainly not worth the hassle of trying to scoop away part of a star's atmosphere.

I can imagine that a chemically peculiar star might attract some attention. In these stars, diffusion, magnetic fields and other processes dredge up heavier elements from deeper in the star and bring them to the surface. Different subclasses of peculiar stars are characterized by the presence of different elements in their photospheres:

Though still composed of hydrogen and helium in similar fractions to the Sun, these heavy elements are substantially overabundant compared to the solar photosphere, and provide potentially interesting targets for exploration.

The biggest concern here is that most stars don't make anything higher on the periodic table than iron. In other words, all you will be finding in most cases is a bunch of really common elements.

The good news is that you will be finding A LOT of really common elements. Apart from the hydrogen and helium which make up ~98% of our own star's mass, it also contains about ~2.984*10^28 kg of carbon, nitrogen and oxygen, and ~9.945*10^27 kg of other stuff like iron, nickel, silicon, etc. That is enough mass to make several Niven style ring worlds, or a single close orbit dyson sphere.

This gives you two routes you can go with:

OPTION A: Build a dyson structure, using all of that carbon, iron, silicon, etc that is already in the star. Then the star will provide all the energy you will need for the next step.

OPTION B: Build a smaller orbital facility, and rely on scooping up hydrogen/helium from the star to use as a fusion reactor fuel source in the next step.

Whichever route you go with, this leads to the same goal of making a star matter refinery. You civilization could then harness the power of the star or gathered nuclear fuels and use it to process whatever elements they need via negative net energy fusion processes, higgs field splitting lasers, and particle colliders.

In short, an advanced civilization does not need to mine materials so much as they need to mine the power they need to make their materials. Once your star factory is in place, it can begin shipping anything it wants: Uranium, Gold, Lithium, Antimatter, etc: all made from the basic elements you scoop up.

There is one reason you'd want to starlift just about any solar-mass or larger star, but it is an absurdly long-term investment. That being that you can prolong the life expectancy of a star by removing mass, especially the heavier elements. For example, if we want the sun to stick around without boiling the Earth in a billion years, we could, in theory, remove as much matter, especially metal, as possible, both lengthening its age and cooling it.

So it isn't the chemical element that you're mining for profit; it's time. This is profitable only if you're thinking on time scales in the trillions of years or longer, and saving up all that otherwise wasted energy for after the natural solar-mass-and-larger stars burn out.

If the hypothesis that the extremely weird elemental abundances of Przybylski's Star are due to the presence of long-lived superheavy elements in the island of stability is correct, maybe that would be cause to mine it. I'd be surprised if dredging a star hotter than the Sun would be the easiest way to obtain such elements though. Even among the rapidly-oscillating Ap stars (of which Przybylski's Star is the prototype) this is quite a strange object, so your civilisation might not have many stars to work with.

Remember that all elements heavier than hydrogen came from fusion happening in star cores. Stars 1.3 more massive than the sun may produce carbon, nitrogen and oxygen; I don't know about other elements but I recall most of them come from novae.

So if your fictional race is mining for elements, in space, their better bet is to skip stars and go for fresh nebula around remnants of novae. That's far from efficient though. Nebula are immorally thin. Where and when they condense into rocky planets, that's when you have ores in a concentration that is maybe worth mining.

It would not be possible to mine a star the gravitational pull is too great and the temperature is too high for anything that we know of or might have available in the foreseeable future.

Perhaps some exotic technology that we are unaware of might do the trick but then the question depends on what assumptions you make about this exotic technology. Even if such technology were available it would be much easier to obtain the materials from else where in the solar system.

Financial/company/profit are concepts in our current world which is based on the culture history and the current technology. In your world these concepts may not be important any more, suppose maybe someday most human being agree that always wanting more/"more is better" is the root problem---the dyson ball is an extreme example of this route.

Technology always make impossible possible, and make expansive cheap, and it will always find a best way based on the current environment. Heavy elements may make some product like some molecule more easy to design since the design space is larger, but we can design molecule with the same function witout the heavy elements in the future. For example we can design a protein that functions like Hemoglobin but doesn't contains even Fe which is not even heavy. Hemoglobin is designed by nature by chance to choice Fe, but we can design it with the purpose to remove Fe dependance someday. So maybe mining in other planets will never be cost effective.

Stop to want more is the only solution. The most important in this is to stop to want human race to sustain longer and longer. We appear, we consume, we try to sustain on earth when there is less to consume, we mess up (like nuclear war/fatal virus), we are finally wiped away by solar system changes (already mess up or not).

Even you travel to and mine all the planet in the Universe, it is still not enough, you will try to find Multiverse, etc. If there is no multiverse , then the job of more is finnally finished. And even more in each planet we will repeat the "We are here, we consume, we mess up(optinal), we are wiped away". But what is the whole point? Clonize and mine all planets in the Universe? Is that different substancially than only live on one planet and get wiped away?

Assuming very powerful antigravity you might be able to profitably mine a neutron star. Much of the heavy elements in the universe come from them but the only way it gets out is in neutron star collisions.

In terms of energy this is probably more expensive than building them up with fusion, but much less processing is needed.

Not the answer you're looking for? Browse other questions tagged science-based stars mining or ask your own question.

4
What motivation would people have for mining planetary rings?
3
How would juvenile humans with few tools start mining? Or is there a reasonable substitute for metals?
7
What issues would an AI asteroid mining stations have to be prepared for?
8
What happens to the leftovers from asteroid mining?
2
At what rate would this renaissance-esqe mining operation proceed?
5
How much equipment would be needed to set up a mining colony?
0
Are Orbital Rings feasible to construct in another star system?
2
What effects would large-scale hydraulic mining have on the landscape?