What would the flora and fauna be like on a planet with the most competition? The most violent planet

My setting has a lush rainforest planet, which houses some of the most feared animals in the galaxy. The abundance of food would make competition tougher and tougher over millions of years of adaptation. What kind of creatures could survive in such unforgiving conditions? Are there any survival tactics that would become more prominent than others? How exactly would this shape vegetation, prey and predators? 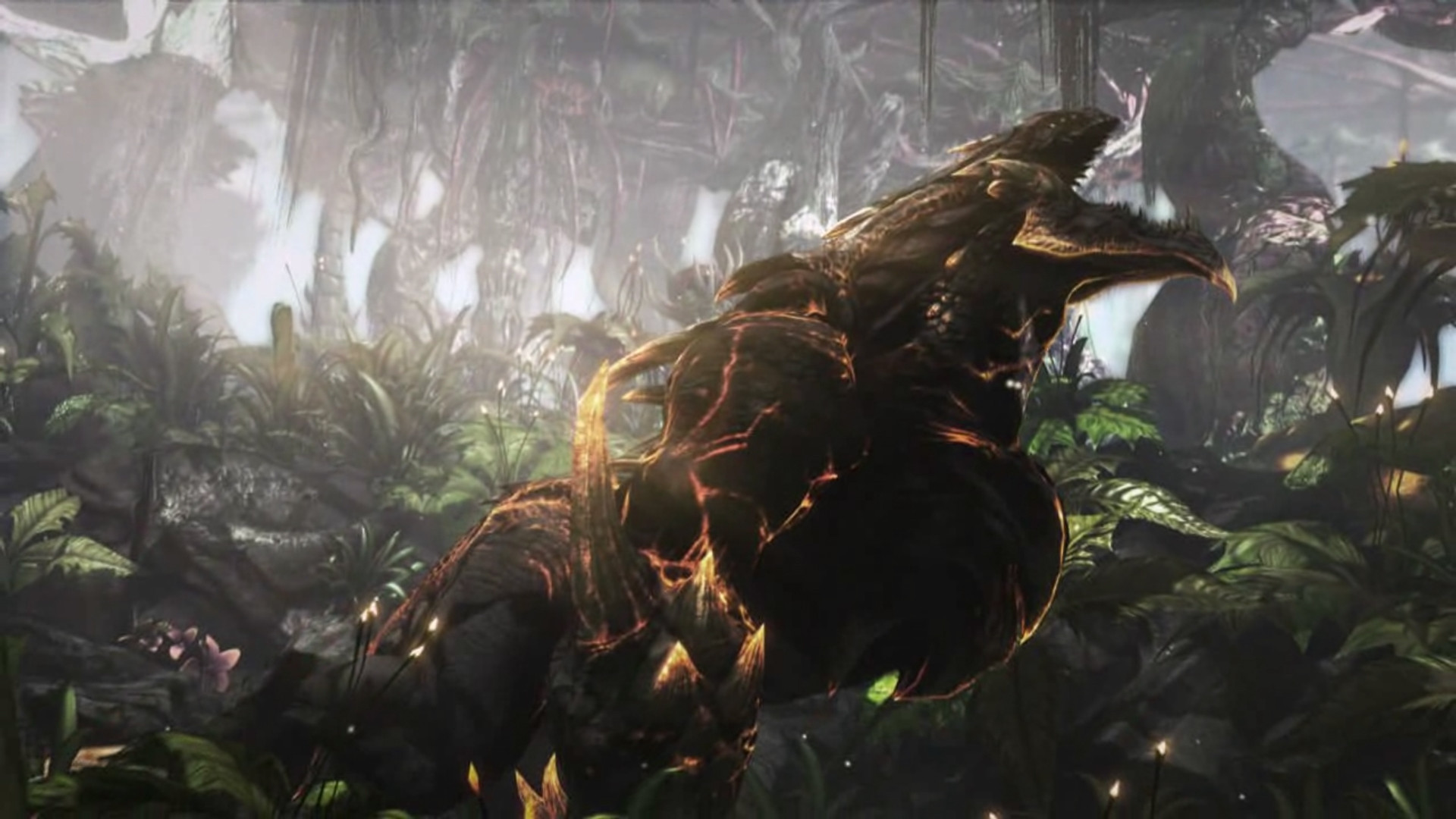 To be more specific what would the plants, prey and predators be like? One example of each at best.

It is very likely that this planet will have cycles of extinction, where a predator has exhausted its prey and will enter hibernation awaiting better conditions. Whenever the population hits its climax predators wear it down to the extreme, thus perpetuating the cycle of violence.

If you have any questions comment and editing shall ensue (please don't put this question on hold, just give a warning.)

Here lies your most important factor. Life seeks niches where there isn't too much competition, and where there is a niche there is more life. Each form of life fears its own predators, but to a lion the fly is a minor irritant. If the lion eats all the antelope, it dies. Any predator that's too efficient leaves itself without a food supply. Now there's space for more antelope, if the antelope become too numerous the lions come back to eat them. While all this is going on the prey are also evolving, becoming bigger or smaller, faster or tougher. The ones the lions can't catch have more children. Then the lions have to become bigger or smaller, faster or stronger to deal with the new prey populations.

This way all things are held in an unstable equilibrium, nothing can get too big, too strong, too effective.

Predators that humans would fear, hold no such fears for mice.

The deadliest predator on Earth is the dragonfly, with a 95% hunting success rate.

Now you have to understand that is something utterly extraordinary, most large land predators manage around 25-30% on a good day. That's also the scale at which you'll find the real savage world you're looking for. Armies of millions marching across the landscape destroying all that falls in their path (army ants). Incredible power to weight ratios, huge flying beasts, acid bites and battles of annihilation for territory. The macro world we see day to day has nothing on the savage battles at ground level.

Despite their reputation for being dangerous locations, if you want an environment that breeds aggressive animals, you probably don't want a rainforest. The complex topology of rainforests gives them a lot of hiding spots, favoring a hide-or-ambush predator-prey game, rather than bloody brawling. In fact this is the main reason why they are so dangerous to humans in particular - guns won't protect you from something you can't see. But the animals themselves are not especially violent.

This may be one of the reasons why so many jungle animals are toxic - venom is an excellent strategy for ambush predators since it lets them kill a target in one good strike, while being poisonous (and advertising that poison) can protect prey from a sneaky predator that the prey doesn't even know about. Coral reefs are similar, for similar reasons.

Deserts also favor ambush over fighting, although in this case it's because of the scarcity of resources - favoring opportunistic predators that can lie in wait while using very little energy, which is why many venomous animals live in deserts. However desert animals aren't particularly aggressive either; nobody wants to waste energy fighting when there is so little energy to go around.

If you want to make things favor fighters over runners even more, one option is to make running hazardous. Perhaps cracked, uneven ground, regular shallow streams, or some kind of twisty ground vine that grows all over the place (but not very high) will trip up speedy, gazelle-like runners, favoring steadfast prey like water buffalo or hippos. This also opens up a niche for small, venomous ambush predators, just to make things a little more deadly.

The most successful large animals in such an environment will likely be built for heavy combat - expect to see armored shells, horns and tusks aplenty. They probably will not be very fast, since the hazardous ground makes running difficult anyway. If you go with the twisty-vine option instead of the grass that has dominated Earth's ecosystem, this gives an extra benefit for herbivores that have sharp tusks, since they can use it to both fight predators and cut up food.

Before getting stuck in: Ocean life has a longer and richer evolutionary history because life came on land only after it had existed in the oceans for some considerable time. So if you want examples of aggressive and richly evolved animals, and plants for that matter, look at aquatic life.

There are several card games on the market where you have a variety of potential cards to play to combat potential strategies by an opponent. Some are reminiscent of rock-paper-scissors. (Or rock-paper-scissors-lizard-Spock if you prefer.) For each potentially lethal strategy there are a variety of potential counters, some of which will be successful, others will be somewhat successful and somewhat failing, and others still that will be total flops.

Or they could tolerate being predated to some extent, and simply be incredibly prolific at producing babies quickly. Such as rabbits.

Or they could mix-and-match. Agile and sneaky. Prolific and poisonous. And so on.

From the predator's point of view, each potential strategy of its prey must be countered to some extent. The big cats get better senses, at least smell and hearing. Birds of prey often have amazing vision. Some predators become very agile and very fast. Some predators develop the ability to tolerate some poison in their diets. Some predators group up and counter strategies of their prey, such as waiting spaced strategically in a hunting area, so one predator only has to chase the target for a brief time, passing it to the next.

If the prey learn to burrow, the predator learns to dig them out.

Each of these schemes is followed by some creatures currently or recently living on Earth.

The thing is though. Each of these strategies requires time, energy, and resources. They have opportunity costs as well as direct costs. So it is not the usual thing to see a super predator who can do all of these things at top pitch. It's an arms race, but there are strong constraints on things like energy use. If your nearest neighbor can get dinner with 5 cm talons, and you have 8 cm talons, maybe your nearest neighbor will out compete you. If you have armor and poison and huge eyes and ears and so on, maybe your relative with less armor can survive with 10% fewer hours of grazing. And so spends less time vulnerable with his head down in the undergrowth looking for tender shoots.

To give a really easy to understand example: A burrowing prey animal will get caught by a predator that can dig. So it must adjust and burrow a little deeper. After which the predator must dig a little deeper. And so on. Eventually the energy for one or the other creature to do the digging will exceed the evolutionary benefit. If it takes a bear more energy to dig out a gopher than the calories he gets from the gopher, it stops making sense to dig out those gophers. If the gopher spends so much energy digging he has no energy left to make baby gophers, it stops making sense. So when this limit is reached, one or the other animal will either die out or learn some new strategy to survive. The bear switches to some other food source, or the gopher learns to hide amid rocks, or some such dodge.

So arms races such as this will tend to stop advancing and start radiating. Instead of piling on more and more speed and agility, the gazelle will tend to find some other plan. Such as camouflage. And so on.

In other words, things will be hugely varied and complicated with just about every possible strategy being tried at least to some extent. But it is unlikely that any creature will pile up extremes of multiple features.

It would look empty, for starters.

To grow from a child to a fully grown adult and then get more children you need more food than you weigh. Eating meat is the most energy rich method but also requires a lot of energy to hunt, and if everyone is a violent meat eater you quickly run out of that meat so you need a massive amount of plant eaters to sustain a small amount of predators and still have enough plant eaters left to keep the cycle going.

Plant eaters that go stealthy or become fast or fly to avoid predators would have an easier time getting children and eat the food of violent plant eaters, but lets imagine that for some mystical reason the plant eaters also became violent to protect themselves. This would mean that there is a large chance the predator dies instead of the plant eater or that they both die, this leads the way to scavangers to become more prominent. It would also mean the predators would need to become smarter and hunt in groups to avoid death by plant eaters or have to gain intelligence and tactics to strike at another violent creature when they are vulnerable.

But all in all the increase in energy to do violence across the board would mean more food consumed by the average creature and therefore less food available for everyone and with that less creatures about. The violent cycle should normally be broken due to the higher efficiency of less to non-violent approaches to surviving on the planet. Why fight if you can hide or run to stay out of trouble?

As for plants, they are plants and have less energy for movement. Their violence would be limited and you would get creatures that have protection against it. Like poison leaves or darts fired by plant pressure wouldnt go through a thick fur hide for example.

The animals would be shaped by the presence of the forest. On the ground it would be very dim even in daylight and there would be lots of canopy for climbing in so I would expect monkey like creatures and snake like creatures to make use of that canopy.

I do not think the circumstances you propose are that different to what happened on Earth historically. Your world-wide rain forests would be on a larger scale but not intrinsically any different from say the Amazon. Natural selection and survival of the fittest are harsh masters in all cases.