I'm providing an interesting twist on the Anatomically Correct series by focusing on a single body part instead of an entire organism.

The following image depicts the average range of the cones of a normal human eye. Each cone allows the eye to see within a different range, and combining those ranges allows us to see in the way that we do.

For my story, I'm developing a creature that has the ability to alter the range of color perception in its eyes. For example, it might decide it wants one of the cones to extend into the range of infrared in order to identify sources of heat.

More specifically, it might take a cone that sees in the range 500-700 nm and change it to see in 600-800 nm. (notice the range is still 200 nm) Sometimes there will be a resulting gap, where colors that were previously easily identifiable become more difficult to see. (as least until it changes its eyes back)

How might an eye with the ability to alter its range of color perception evolve?

Assume an Earth-like planet. Any neural alteration that might be required should be addressed in the answer as well. (because if the brain can't interpret the different colors, there's no point in an eye that can capture them)

The eyes should be capable of making these changes in an amount of time ranging anywhere from a few seconds to an hour or so. (the quicker, the better)

This is actually doable -- easy, even.

For infrared, as @overlord has noted, there would be difficulties that might make it not worth your while. On the other hand, it depends on the use case:

You cannot change the spectrum response of a cone because it depends on which opsins it contains, and the frequency response of those is fixed. But there is nothing in principle preventing supplemental opsins to be synthesized in response to specific conditions (this already happens, to some extent) - or permanently.

Some fish have an opsin with λmax = 370 nm, allowing to see ultraviolet. A first mutation to create a fourth population of photoreceptors using almost the same opsin they already do (this, too, already happens, albeit only in human females - so called tetrachromaticity), then the extra opsin mutates and becomes sensitive to infrared, giving (for example) a night hunting advantage. The receptor would probably be continuously "photobleached" in daylight, and would slowly regenerate as soon as it's dark - not unlike how rhodopsin night vision is acquired.

Another possibility is some mechanism enhancing the capture sensitivity of existing opsins. This way, the eye becomes "simply" more adept at detecting light at different wavelengths.

We start with a mutation similar to one that already happened in human's branch of vertebrates (and too many times in the case of the mantis shrimp): the doubling and mutation of the gene sequence for an opsin, giving rise to a fourth type of retinal cone (or rod). This new opsin has a sensitivity peak shifted toward the infrared ("Rhodopsin-X", in green), and is proportionally more sensitive, so during daytime the receptors are photobleached, and not used by photopic vision. This already happens to some extent with rod photosensors.

Then, the opsin further mutates, until its peak lies well into the near infrared range ("Rhodopsin-X", in red). 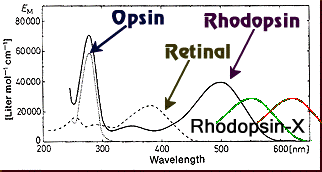 When scotopic vision kicks in (at dusk, below one thousandth candle per square meter), also Rhodopsin-X starts regenerating, with relaxation time similar to normal rhodopsin, therefore between 30 and 45 minutes, which satisfies the "one hour" constraint of the OP.

We now have near-infrared vision. This will be comparatively weak, though, because infrared is significantly absorbed by water... and the human eyeball is filled with water. So, the retina could only detect the fraction of the IR signal which survives passage through the crystalline.

To have voluntary NIR vision, we would need to add a further modification: a nictitating membrane transparent to infrared, but opaque to visible light. This could take the form of a very thin membrane with a high content of a specialized melanine analogue. It would never be able to shut out the daylight at any significant photopic intensity, but it could allow to switch between mesopic vision and NIR vision. And, however, in full daylight and in the Sun's heat, most infrared information would probably be blotted out anyway.

Note that even then, closing the membrane would not have any effect for several minutes, with full NIR vision only achieved after 30-45 minutes. And in that period the membrane would need to stay closed, blocking ordinary vision. BUT it would be possible to close one membrane, regenerating vision in that eye, and using the other to see visible light.

As, LSerni points out, the eye detects color based on what proteins are present in each cone. As far as I know, every organism that naturally exists produces more or less the same ratios of proteins in each cone indefinitely for the lifespan of the cell; however, it may be possible for a cell to either re-absorb and form new proteins (This could take as little as 20 seconds) or use a Epigenetic process to split and form new cells with new ratios, and absorb the old ones. (which would take about half an hour)

Another theoretical solution is to rearrange the proteins. Melanin is a good example of how our bodies can adapt to environmental stimuli by how it chooses to turn the pigments to block more or less light. A similar process might help a cone adjust the balance of what it detects.

I'm not sure how relevant this is, but if you were to add an aspect like the cuttle fish and octopus ability to shrink and expand their melanin sacks on their skin to rapidly change their colour and shape, could this be applied to the cones? So have several with one type of protein in them, another with some more (etc.) and have the animal able to shrink the ones that are not needed and expand the ones that are.

Probably completely impossible, but maybe something to think about.

Not the answer you're looking for? Browse other questions tagged reality-check evolution anatomy light colors or ask your own question.

2
The Rods and Cones on Equal Terms
10
Can we identify distinct “colors” beyond visible light?
4
Relationship Between Eye Color and Color of Sun
6
What are the implications of multiple cooperating intelligent species with different spectral ranges for vision?
2
Anatomically Correct - (ONI) Hatch
4
Would living on around Alpha Centauri change how our eyes see color?
2
Anatomically correct Kryptonian, part 1
5
How much can I expand human color perception by adding new photoreceptors?
8
How could be a relatively “universal” eye?