Is it realistic to have a sound-based naval identification system?

I have a number of sea-faring races in my fantasy story. The world is relatively mundane i.e. no magic and the races are somewhere the Graeco-Roman classical period in terms of their technology, give or take a few hundred years.

Since many of these races travel in ships for trade and may encounter each other on the high seas I wanted to come up with an identification system different from the traditional flag system particularly for use at night and I wondered if it would be reasonable to invent something like a Three Note system whereby three notes in a particular sequence would represent Race A whereas a different sequence would represent Race B and so on. I know that sound travels faster over water than on land but how feasible is this out on the ocean? If you are hundreds of metres apart could you even make a loud enough sound to hear it over the roar of the ocean and what kind of instrument would you need to make it?

FYI, I am favouring this idea over light signals due to the risk of fire on wooden ships but also, two of the four races are periodically at war so it would be in the best interests of the other two non warring races to declare their identity up front and early to any ships they may encounter at night or by day. Ships entering waters held by a warring race may be subject to swift attack without declaring their identity.

Assuming that this is even feasible in the first place would you need twelve different large horns for the different "natural" notes? (That is of course assuming they understand music the way we do) Would three or four horns suffice? Would it make the most sense to just take the three horns you needed to identify yourself? For example, a basic system could use three horns tuned to C, F and A#. Allowing for repetition, this would give twenty seven possible unique identifications. I have seven races at present, not all of whom are seafaring or even if they are they are not all travelling the same waters and so realistically only four of them would have a need to identify themselves to each other. Two of these races are periodically at war so it would have certain utility as a warning mechanism but also as a deception to pretend to be someone you are not in order to get close in the dark and then attack. I feel like it could be a somewhat unique and interesting system that could have some novel implications.

TL;DR - is it feasible to use something like a series of small horns to identify yourself to another ship on the ocean a few hundred metres away?

Any and all feedback greatly appreciated!

The benefit of the flag system is that you don't have to memorize every nation/entity. The flag is persistent, so you can look it up, ask around (the captain has to sleep sometime), or hazard a guess. Sound is ephemeral. It happens, and then it's gone. Having a complicated system of notes would be extremely hard, especially when you take the doppler effect into account. Without a way to tell if the ship is closing or opening in distance, you don't know if the source sound is compressed or not. With only 4 races to consider, I would use one long note, each race having their note tuned to widely different parts of the spectrum.

Yes, and it is in use today.

Foghorns are still used in both static installations and aboard ships; as an example, this is the identification pattern used on the Golden Gate Bridge: 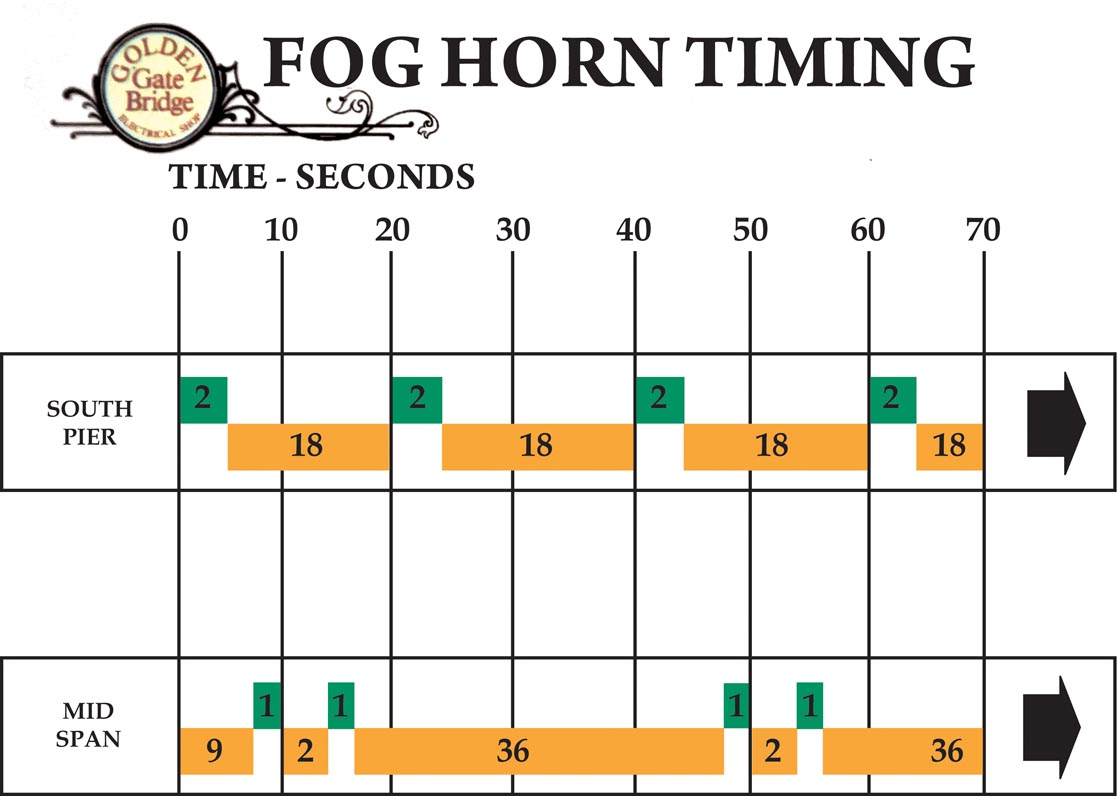 Some buoys are also equipped with bells, for similar reasons.

Cadences are more commonly-used in the real world than tonal differences, but they both could work.

You mentioned the graeco-roman period. Galleys had hortators or keleustes who would set the pace with a drum. It would be conceivable that different nations use different instruments and that they are loud enough to be heard at usual engagement ranges.

This would work mostly for warships under oars, of course.

The main issue with a sound based system is that at sea, sound may not be heard. A ship can get very loud between wind in the rigging and and the rushing of the water. Horn signals will carry downwind, but upwind may be completely inaudible. Even on the same ship you soon need to resort to shouting to get understood.

Sound being an active signal is also a disadvantage, you actively need to give a signal, while you may not know if your recipient received it, or even wants to know it. Identifying flags can be seen from miles away, where sound definitely won't be heard reliably at these distances.

I think a system like this could work, if the object that needed to be identified could have some kind of structure that was identifiable under sonar. Just like bats use echolocation to orient themselves and detect their environment, so too could a sound-based system, suggesting a means of discovery of the technology. Sounds like a cool idea!

Not the answer you're looking for? Browse other questions tagged science-based internal-consistency technology medieval communication .

4
Can a race/species survive consuming only liquids?
11
Why would all races simultaneously need to find new homeland
6
Which are the requirements for a medieval warship to travel the high seas?
5
Earth Has Four Seasons Lasting Years. Is This Too Much?
3
Plausibility of only two cultures/peoples existing on one planet?
15
Is it plausible for a certain area of a continent to be/remain/become uninhabited for a long period of time?
4
Rail Transportation with Races Described Below - Specifically, Seating
8
Would a solar system with four earths directly opposite to each other have different flora?