What would be the best propulsion system for this aircraft carrier?

So, I was watching a funny movie about undead pirates when the realization hit me, I never once tried to create naval superiority for my Mary Sue. Well, guess I just do it now.

Titanic 2: (n)Ice to meet you is the unholy offspring of Project Habakukk, CMF and Patrick Star.

Titanic 2 is a 1.2 kilometer long aircraft carrier, designed exclusively for UAVs. roughly 4/5 of the ship's body (not counting the conning towers) is a homogenous block of Ultra-high-molecular-weight polyethylene, "alloyed" with an aluminum-based composite metal foam, both reinforced with a hint of graphene. 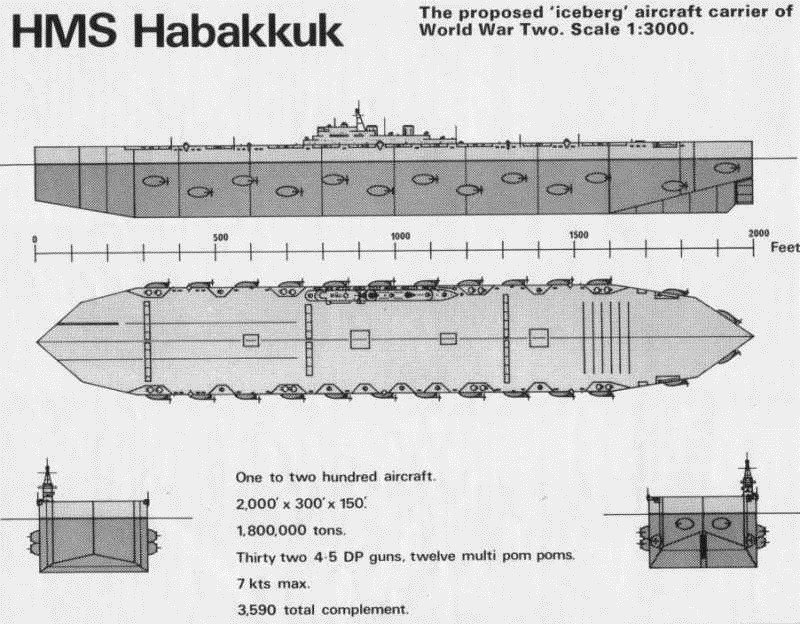 Something like this. Increase length to 1.2 kilometers, width to 180 meters and double the height.

Can you sunk a plastic bag with a torpedo, or set it on fire? I dont think so!
- Anon, moments before he was set on fire.

The ship's material is buoyant, and unlike pykerete, is much lighter while providing the same, if not better, protection. Basically, Titanic 2 is too large and too simple to be sunken. Weaponized stupidity!

However, I couldn't solve propulsion. Titanic 2 is much lighter than her predescessors, as she isn't an artificial iceberg, but still very massive and I just couldn't come up with a powerful-enough propulsion system, equally as redundant as the rest of the ship.

What propulsion system (with what modifications) should Titanic 2: (n)Ice to meet you use?

Update: Since people kept nagging me about how aluminum is not suitable for this job, then FINE! I declare every instance of the word "aluminum" here to be changed to Y-alloy, a high-strength alloy that maintains its strength, even when subjected to high temperatures for longer periods of time.

Titanic 2 should use multiple reactors and independent systems to provide a reliable means of propullsion.

However your Titanic 2 would be very vulnerable to missile attack. I shudder to think what would happen to such a homogenous block of Ultra-high-molecular-weight polyethylene, "alloyed" with aluminium-based composite metal foam, both reinforced with a hint of graphene, were it to encounter a high velocity surface to surface missile. It would make the Hindenburg look like a fire lighter.

Many vessels in history have had two or more methods of propulsion.

Galleys have both sails and oars.

Most 19th century steamships had both steam engines and masts and sails. most large modern sailboats have both sails and motors.

Many large aircraft carriers of today have one or more fission reactors to power their engines, even though they are smaller than your super carrier.

Therefore, I deduce that your super carrier would have hollow areas inside its unsinkable block structure, containing enough fission reactors - or possibly fusion reactors if far enough in the future - to power the ship.

For propulsion the atomic reactors would generate electricity and the electricity would be transmitted by wires to many propellers in many pods attached to the main hull of the super carrier.

For reasons of stability the massive nuclear generators in their hollow areas should be placed rather low in the ship. So they might be partially below the waterline, and thus could possibly flood with water.

To counteract that the super carrier should contain water storage tanks containing an equal mass of water as would fill the hollow areas containing the atomic reactors. If the atomic reactor areas start to flood, water can be pumped from the storage tanks into the sea to maintain the weight of the super carrier at a constant level, while pumps also pump water out of the reactor areas.

You may remember Tom Clancy's 1984 novel The Hunt for Red October and the 1990 movie based on in. The Soviet submarine Red October is supposedly equipped with a stealthy magnetohydrodynamic (MHD) dive to use only magnets, with no moving parts, to travel though the water.

MHD has been studied for propulsion of surface ships, submarines, aircraft, etc.

MHD has no moving parts, which means that a good design might be silent, reliable, and efficient. Additionally, the MHD design eliminates many of the wear and friction pieces of the drivetrain with a directly driven propeller by an engine. Problems with current technologies include expense and slow speed compared to a propeller driven by an engine.[14][15] The extra expense is from the large generator that must be driven by an engine. Such a large generator is not required when an engine directly drives a propeller.

The first prototype, a 3-meter (10-feet) long submarine called EMS-1, was designed and tested in 1966 by Stewart Way, a professor of mechanical engineering at the University of California, Santa Barbara. Way, on leave from his job at Westinghouse Electric, assigned his senior year undergraduate students to build the operational unit. This MHD submarine operated on batteries delivering power to electrodes and electromagnets, which produced a magnetic field of 0.015 tesla. The cruise speed was about 0.4 meter per second (15 inches per second) during the test in the bay of Santa Barbara, California, in accordance with theoretical predictions.[20][21][11][12]

In 1991, the world's first full-size prototype Yamato 1 was completed in Japan after 6 years of R&D by the Ship & Ocean Foundation (later known as the Ocean Policy Research Foundation). The ship successfully carried a crew of ten plus passengers at speeds of up to 15 km/h (8.1 kn) in Kobe Harbour in June 1992.[2][23]

Small-scale ship models were later built and studied extensively in the laboratory, leading to successful comparisons between the measurements and the theoretical prediction of ship terminal speeds.[14][15]

So depending on how advanced the society of your story is, the super carrier might use a MHD drive full time or part time.

This isn’t a vessel. This is a platform. Much like an oil rig you should move it to wherever it is you think needs that much UAV support, then anchor it (Anchoring is a stupid idea, keeping this ship moving is pretty essential, thanks to @ MorrisTheCat for pointing that out!) To that end you don’t want it to move under it’s own power: that would be exorbitantly expensive and hard to do, not to mention maintenance would be a pain.

So instead have a fleet of tugs. Preferably drone tugs, in keeping with your remote operation theme. Give them light armour, no weapons, heavy structural bracing and keels and huge, huuuuge engines, and then chain them to your carrier-berg.

They offer several advantages: individual tugs can be swapped out with ease. With a vessel that size you could even have a small dry dock for tug repair if you wanted. The loss of any one tug won’t completely cripple you (though you may need to take care with load balancing: more on that in a bit). Tugging and shunting offer you all manner of directional control for difficult maneouvres, and in the event of attack your small, powerful tugs can be tactically repurposed to help potentially damaged or incapacitated escort vessels.

The downsides are logistical complexity, additional vessels that need defending from both the enemy and the sea, and structural stresses due to unbalanced loads. All of these are helped by using drone tugs!!

Drone tugs can automatically monitor and adjust for various stresses on the coupling chains, automatically working as a group to perform even the most complex tugging operations. Drone tugs also don’t run into the logistical complexities created by squishy meat bags. All they need is fuel and repair.

Defence is a touch more tricky. International law on maritime drones gets tricky when you start bolting on weapons, but as these are tugs you wouldn’t expect them to have much of their own. Instead these will be heavily reliant on the shelter of their fellow support vessels. That’s easy in the case of enemy attack: as long as they’re sufficiently covered by point defence, AA envelopes and electronic warfare and anti-torpedo defences... phew ... they should be fine. Your escort vessels can take care of all that, right?

In the case of defence from the sea: tugs aren’t typically built for storms. Open sea isn’t what they do (Except for specialist platform tugs, and even they avoid storms that your carrier group might have to weather) They will capsize, flood and sink. But your tugs are drones! They don’t care about staying upright for the most part. Build them watertight, with a heavy keel, and they can flip all the way over without really inconveniencing anyone. You do need to make sure they don’t bash into other vessels though, and for that you need relatively calm waters. For example: the calm waters that can be found in the lee of a 1.2 KM long behemoth of an aircraft carrier. Cluster your tugs together on the leeward side of the ship, then use their drone-co-ordination to keep the carrier facing the correct way into the wind and waves. You won’t move fast, but should come out of the storm all shipshape and Bristol fashion.

Your vessel is stupidly light. It is also very large. So it can have thousands upon thousands of sails of all kinds and shapes. They would be very redundant and replaceable.

It could also pick up a hell of a speed depending on how it's built, once it builds enough momentum and if the ocean current helps.

Your carrier is stupidly light. It also has space for a large amount of aircraft, all with very powerful turbines...

When aircraft are stored in a real carrier, they are locked to it with things such as holdback bars: 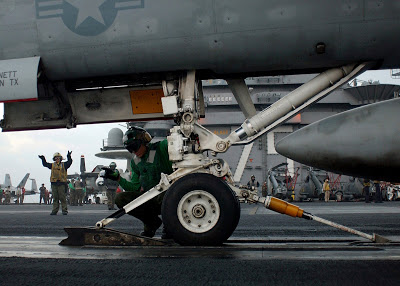 Just bind enough jet fighters on the main deck through such bars, all pointing the same way, then turn the engines on. And as your ship conquers the waves, apply appropriate soundtrack.

Train a few pods of dolphins to wear special dolphin harnesses which allow them to collectively pull your fighting barge where it needs to go. Of course, you power the dolphins with feed fish buried deep in its hold. Also, the barge has fishing gear so you can replenish your fuel at sea.

Your drones should be electrically powered. The aircraft carrier is nuclear powered, with oodles of small reactors dispersed throughout the ship. Since you already have a ton of drones and a ton of power, efficiency isn't a concern -- stick some of those bad boys under water and have them push the ship (your drone propeller design may have to be somewhat complicated to handle two different fluids).

You cannot keep that ship right side up.

IN order to be stable, the center of mass of a ship has to be below the water line. This is generally accomplished rather easily, having a hollow ship means that most of the weight is in the hull, and therefore the right way down. Some ships use weights to ensure stability.

However, your hull is a solid block of mass lighter than water. It'd start capsizing right out of the shipyard.

There's a reason ships aren't build this way. Even the wooden canoe's in the amazon forest are hollowed out to stay right side up.

Not the answer you're looking for? Browse other questions tagged science-based engineering ships or ask your own question.

8
What is the best practice for (alien) archaeology?
5
What environments would be best for a robotic AI lifeform?
13
Off-planet energy production - what would be best way to supply this energy planetside?
10
What near-future propulsion system(s) could be employed by my spaceships?
25
Would this biological cooling system work?
5
The practicality and feasibility of a fully-submersible aircraft carrier
8
What would be a plausible speed for a 22nd century military ship?
20
What is the best design for docking onto a rotating space-station?