Rust Monsters are one the few original monsters in D&D that didn't fade into obscurity. Probably because of their ability to turn James' favourite metal items into dust. 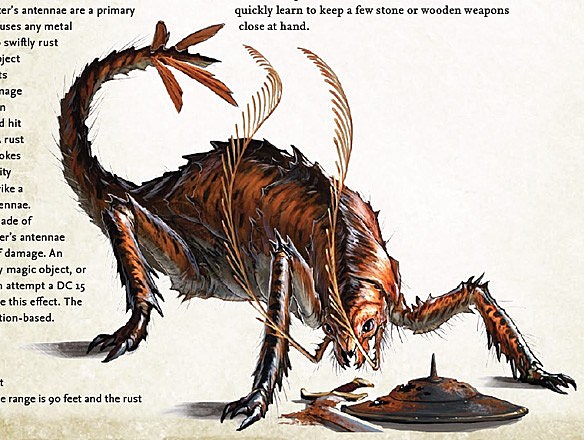 Rust monsters are basically large bugs with two equally large antennae. The Rust Monster, with the antennae, rubs an unspecified chemical on the metal that degrades it and turns most of the item into dust.

Ok, so here’s the thing, in order to rust metal that quickly, you’re going to make it burst into flames. However, since we’re trying to strike fear into the hearts of daring adventurers, this is a big bonus!

As for how to do it, its actually fairly easy to explain. See, contrary to its name, oxygen is not the best oxidization agent we have. Enter fluorine, which oxidizes so strongly that it can cause water to burst into flames. So, your rust bug obtains some fluorine, and since we’re talking about D&D you can use a little handwavium to explain how they get pure fluorine and keep it from burning them alive, and they store it in a viscous, gel-like substance in special organs at the base of each antenna. On command, the gel is pumped through the antennae and out special pores. The gel sticks to whatever it hits and rapidly begins to evaporate, exposing the deadly fluorine within. The gel, and whatever it has touched, bursts into flames as the fluorine begins oxidizing everything around it. By the time the flames die down the adventurer has dropped his weapon/stripped off his armor and ran away screaming. When they come back later to retrieve their items, all they find is a pile of rust.

Not the answer you're looking for? Browse other questions tagged science-based creature-design biochemistry or ask your own question.