How severe can an Iron Aversion be?

I like the idea of elves having a distinct weakness against iron, to the point where they're intensely scared of it and can't stand the touch of it. 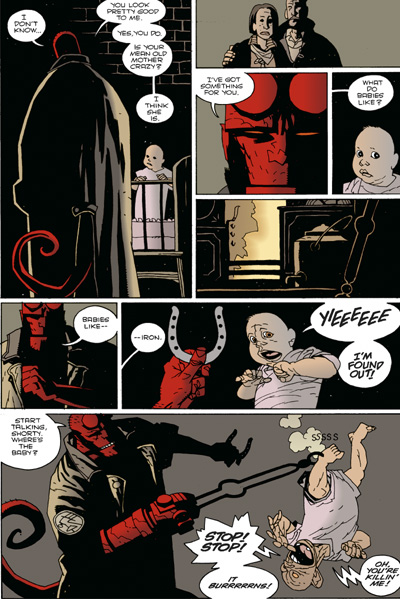 My question is: Assuming the Elves are mostly like humans, just how extreme can the weakness to iron realistically be? I know some people are allergic to steel (I am slightly), but would it ever be so bad that it's painful to the touch? Would such an extreme reaction prevent them from eating normal food that contains iron compounds? Could this be possible in a humanoid species without drastically changing their basic physiology?

Ideally, I want a race of elves who normally look like pointy-eared humans, are able to pass themselves off as human with a decent disguise, and can interbreed with humans, with the exception that for most of them, touching solid iron or steel physically hurts. How might this be possible and what would the ramifications be?

The "interbreed" part is where it all falls down. Our physiology is critically dependent on iron (we're awash with iron compounds from conception on). Assuming that your hypothetical elves used a different blood chemistry (copper, paging Dr. Spock), they'd be a radically different species, even with similar morphology.

This would make interbreeding absolutely impossible.

Now, that aside, if you had a copper-based blood chemistry, like the horseshoe crab, then something like a contact allergy could be a very real condition endemic to this species. 85% of the human population is allergic to Urushiol, the molecule common to poison oak, poison ivy, and poison sumac, among other plants. It's not unreasonable for an even more common contact allergy to be characteristic to this species, and while that wouldn't result in immediate pain upon touching iron, would certainly result in a visible rash and extreme discomfort after contact.

So in place of testing someone with a horseshoe, they might be compelled to wear an iron chain for a few hours. If they can't stop scratching, you've got yourself an elf!

You can go two ways.

One, they have a chemical aversion for iron. They might have slightly acidic skins, enough to quickly dissolve enough iron ions to get an allergic reaction. That would neatly explain the "burning" sensation. Basically, iron for them is what poison ivy is for humans. Using silk and leather gloves would allow a Sidhe to manipulate iron without problems.

Two, more esoteric - it's not iron they have problems with, it's ferromagnetism. Elven powers and their very biology are a (waves hands quickly) mixture of magnetic quantum effects, so they are most at ease in presence of diamagnetic materials - silver, copper, gold - and strongly repelled by ferromagnetic metals like iron, nickel, or cobalt. Iron is the only one they were familiar with. Also, not all kinds of iron are equal; heat-treated austenitic steel is only weakly magnetic and thus bearable, while cold-forged iron is the worst. One consequence of Method 2 is that Elves can't abide technological civilizations, with their electric distribution grids and haphazard magnetic fields thrown every which way.

Unfortunately, method 2 requires a biology so different from human norm that you couldn't get interbreeding with it for any price. Unless you exploited the nanomachine Deus ex Machina - Elves are normal humans with some genes tweaked and a compatibility with nanomachines. Unfortunately, those nanomachines can't work properly in a magnetic "choppy sea", as in near ferromagnetic iron or electronic components. In that case you're left with the not inconsiderable problem of explaining how these Elves and their nanomachine guests happened to come by.

Many people have encountered this effect in the mouth. Taking a piece of aluminum (or possibly other metal) into the mouth produces an electrochemical reaction with silver-containing metal fillings. If the metal actually touches the filling this can produce a painful shock.

The first of the discomforts is known to anyone who has bitten a piece of aluminum foil, perhaps on an incompletely unwrapped piece of candy, in such a way that aluminum presses against a filling. The sharp pain which momentarily results is quite memorable. In effect, a voltaic cell has been created in the mouth. The aluminum (E° = -1.66 V) is the anode and the filling is the cathode. Saliva and gum tissue fluid act as the electrolyte. When the two metals touch, a short circuit results and a feeble current flows. The nerve of the tooth is more than sensitive enough to detect this current. Rapid polarization at the electrodes causes the pain to be brief. In the writer’s experience less active metals, such as nickel, iron, stainless steel, and copper, do not deliver a detectable sensation. A more sensitive individual, however, might be able to discern differences and, thus, construct an electrochemical series physiologically.

A similar phenomenon happens with elves and iron. Elves are always sticky with sweat, and their sweat contains large quantities of silver ion among others, accounting for their need to periodically gnaw on silver. Elfin skin is thin and their nerves are many, rendering them exquisitely sensitive to all sorts of stimuli good and bad. The electrovoltaic potential produced between their silver-laden thin skin and iron metal is considered bad. The discomfort is transient, but elves are also drama queen wusses and so make a huge deal about the sort of discomfort lesser races resign themselves to deal with many times a day.

Not the answer you're looking for? Browse other questions tagged science-based biology fantasy-races chemistry or ask your own question.

6
How can fae rescue one of their number from an iron cage?
18
A Non-Iron Elvish Steel
2
How would Fair Folk-type elves deal with dietary iron?
2
Effects of severe radiation storms?
5
Can you forge iron from oxide dust?
5
Could life arise using iron pentacarbonyl as a solvant?
3
How do male vampire loses iron?