How were racial differences treated in pre-modern civilizations?

So, I have a setting where there are three different races: Elves, Humans, and Dwarves.

Humans are the same as normal humans, Elves are weaker and shorter, and have pointy ears.

Finally, Dwarves are more traditional, think early Inuit society, and mostly lack metallurgy.
They are anatomically like a mix between Neanderthals and modern humans.

How would such differences be treated in a pre-gunpowder society?

The oracle of Amon said that all those who drink the waters of the Nile are egyptians. That could mean 2 things: Those who live by the nile were egyptians or those that learned the egyptian culture (the Nile) were egyptians. The egyptians didnt care much for race or skin color, they cared if the rulers followed the Maat and the Maat says nothing about race. That's why when the nubians ruled Egypt there was no problem.

Some people may raise the issue of the hebrew slavery. There are many reasons, many evidences, to belive that it never happened.

So Egypt had no racism as we understand today and didn't really cared about racial differences.

Adapting to your situation: What matters is culture and religion. If the races follow the religion/culture, they are tolerated. If they don't they are driven away.

It entirely depends on the particular culture. For instance, Rome didn't really have racism as we think of it today. Instead, there were Romans and barbarians (that is, everyone else :-)). But a barbarian could be captured as a slave, become a freedman, and his children could become Roman citizens. E.g. the Roman poet Horace: https://en.wikipedia.org/wiki/Horace

Even on modern Earth, with only one species of humans of different ethnicities, prejudice is everywhere.

Your pre-modern civilization, with different races, would be even worse. I don't think there would be a lot of open-mindedness among different cultures.

Even among those of the same race, there would be prejudice. For example, elves from the woodlands might be referred to as "dirty elves" by the elves that might live in a city with stone walls and large structures. They would think of themselves as "high-class" and might have low tolerance for outside cultures.

> To use your own example (before the edit), dwarves would be called "primitive" by other races like the humans and elves.

But it's your story, so you can always make exceptions!

Looking into nearly any tribe for that matter it's the strong ingroup mentalities that tribes who don't have much contact with outsiders all possess in various countries.

Basically they have their in group preferences sometimes its village to village other times its region to region it dectates who they can talk to or must avoid both internally and externally.

Your Elves for instance like other Elves but if you have albino elves or tree skinned elves? That's a new class does the majority of elves think tree ones will make good ingrediants for potions so they hunt them down to kill them to craft things? Cuz in Africa they have so many tribes who do just this for so many small things like having black skin and blue eyes combo or being an albino this is done because of myths and incorrect facts surrounding their targets the more remote the tribe the better chance this can pop up. But notice this is remote if you've got more face time now between races you might want the myth angle.

Myths populate over time so your dwarves might be thought of as spawning from reptiles so people say keep this or that away from them or keep hold of infants less they eat them.

Humans can have myths or past war grudges between them all but they could be thought of as the baby eaters after all they already eat animal eggs whats to stop them from eating your children? During WW2 the Japanese thought the Americans ate babies because we had babies faces upon our cans for them and the Japanese thought the food inside where the smiling tots on the cover! This made them kill off many infants rather then see them fall into the hands of the child eaters!

You could go wild with this but keep in mind what is best for your story. Some flavor is fine but you need to reveal info on the characters, important events/reveals to come, or move the plot forward due to this racism or speciesism.

Dragon Age and Mass Effect have this more for flavor in the Witcher 2 you get it directed at you for the player is the outlier but it doesn't stop you from doing quests. In Kingdom Come Deliverance you experience mild classism so you could check out all these games if just doing more research online or watching movies isn't helpful. Because how humans treat and have treated one another is really going to parallel the treatment forms speciesism will take.

Already in past it was noticed that some ethnic groups seems to excel at particular tasks. For example Normans (Vikings) were much taller, stronger and fierce enough to be main source of mercenaries for centuries, hired even by not so close Byzantium. They managed to conquer for themselves multiple lands, from less known - Sicily or Kiev Rus. Their era ended because they simply integrated in to local population.

Humans as they are already diverse enough to have some groups over represented in specific jobs. For example: people who evolved lactose tolerance, have clearly had an edge in being shepherds. If we assume that there are some genetic differences in average IQ between ethnic groups, then we could reasonably explain why ex. Askenazi Jews are highly over represented among Noble prize winners.

Nevertheless, here we have people that normally mix, so if whatever alleles are highly beneficial they would spread so ethnic groups living together would mix. Assuming that's not workable with different species, you end up with peoples with absolutely diverse predispositions, that would naturally pick the best jobs for them, which would lead to job separation. Moreover, as in premodern society people team up in clans, then at best they end up separate but equal, or more likely create some kind of caste system. As caste system worked in stable way in India for millenia, I'd say that's the way to go. The only problem that I see even peaceful situation is whether all species reproduce in roughly the same speed, otherwise in long run, some would be outbread.

In recent years we started to get genetic studies of our distant past. Population replacement were highly common, even though we are one specie. In Europe, first neolithic hunter gatherers were partially replaced by Anatolian farmers. Later, in the most brutal way possible (in most cases, except maybe nowadays Spain, genetic data show that not even women were spared) those were mostly replaced by Yamnaya. Similar process were happening already in quite recent times with Bantu expansion in Africa, which doomed most of Pygmy and Khoisan.

If we talk about more distant past - all what's left out Neanderthals and Denisovians is some tiny genetic admixture in out-of Africa homo sapiens. So I see the pattern, and it's not optimistic one.

As side note - please let me ruin story that ancient and premodern people were not racist in modern meaning of this term. Sort of true, just let me remind the fine print

Those who live in a cold climate and in Europe are full of spirit, but wanting in intelligence and skill; and therefore they retain comparative freedom, but have no political organization, and are incapable of ruling over others. Whereas the natives of Asia are intelligent and inventive, but they are wanting in spirit, and therefore they are always in a state of subjection and slavery. But the Hellenic race, which is situated between them, is likewise intermediate in character, being high-spirited and also intelligent. 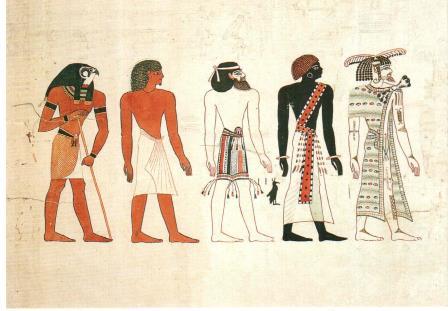 22
Physical correctness of trolls with high regeneration ability
8
Would shortening a species lifespan increase the speed of technological advances?
7
What factors would allow this caninoid species to evolve successfully?
5
How would a big cat evolve to climb on and jump between ruined modern buildings?
3
How to tell bird people apart when their visual differences are more subtle?
1
How and where would bird-wing fold away if they were mounted on internal turtle shoulders?