Would fantasy dwarves be able to invent and/or manufacture the radio?

It has the implications that dwarves use magic, but to an extreme extent, and even then, it's mostly for industrial usage of mining, refining, smelting, manufacturing and so on. My dwarves are practically on the brink of entering an industrialized era, rather being pre-industrialized like most traditional fantasy races.

Because of it, I started wondering, what inventions of the Industrial Revolution might be possibly practical to research, invent and manufacture for such a race, and the radio grabbed my attention.

For the record, my setting consists of multiple closed communities with varying tech level, from prehistoric to pre-WW1 era, meaning that the radio may already exist in this world. Thus, I can imagine dwarves obtaining a single radio, analyzing its mechanics, and replicating it.

1) What preconditions are necessary for such a community to be able to invent the radio? Assume an abundance of any kind of metal, and that electricity is not widespread but they have proficiency with it.

2) What are the conditions necessary for mass-manufacturing early 20th century radios? Again, assume abundance of metal, proficiency in electronics, but also the existence of the concept of factories: assembly lines, separation of steps, etc.

Related question: what are the possible obstacles for such actions to happen? E.g. lack of fine mechanics 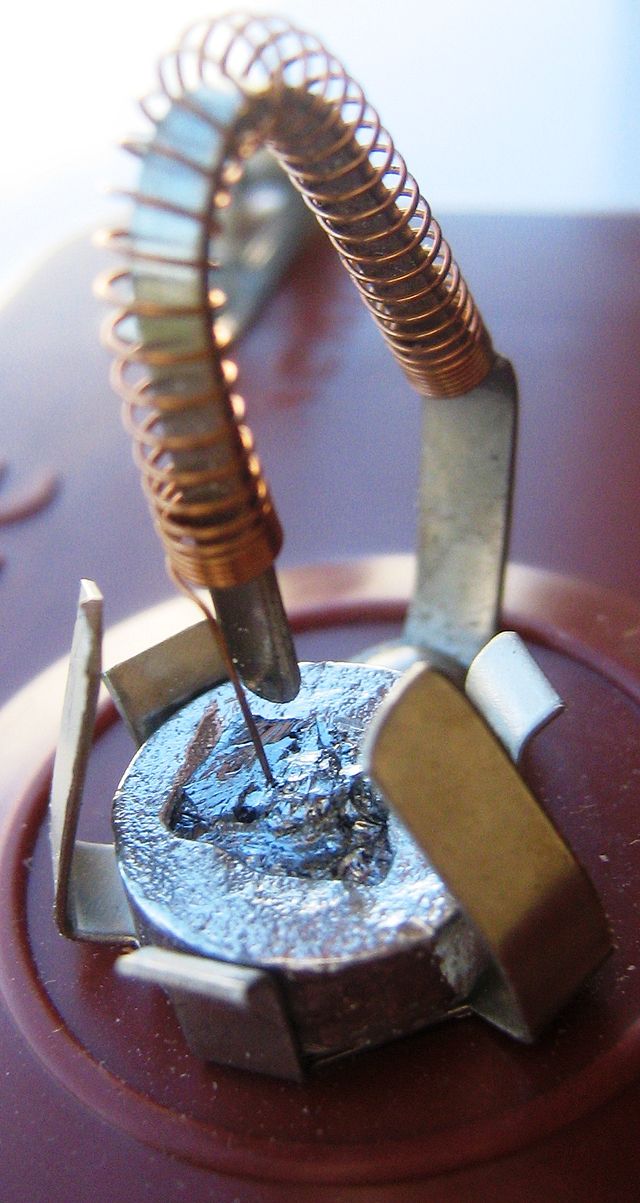 Patented by Braun and Pickard in 1906, this was the most common type of crystal detector, mainly used with galena but also other crystals. It consisted of a pea-size piece of crystalline mineral in a metal holder, with its surface touched by a fine metal wire or needle (the "cat whisker"). The contact between the tip of the wire and the surface of the crystal formed a crude unstable point-contact metal–semiconductor junction, forming a Schottky barrier diode... Only certain sites on the crystal surface functioned as rectifying junctions. The device was very sensitive to the exact geometry and pressure of contact between wire and crystal, and the contact could be disrupted by the slightest vibration. Therefore, a usable point of contact had to be found by trial and error before each use. The wire was suspended from a moveable arm and was dragged across the crystal face by the user until the device began functioning.In a crystal radio, the user would tune the radio to a strong local station if possible and then adjust the cat whisker until the station or radio noise (a static hissing noise) was heard in the radio's earphones. This required some skill and a lot of patience.

A cool thing about the crystal radio - it requires no energy inputs, but runs off the strength of the transmitted radio signal. Tesla's dream of broadcast energy come to life! The skill and patience part is perfect for dwarves and of course they would use flashier crystals. I envision radio rooms where large crystal rigs and similar geologic amplifiers allow the dwarves to listen to radio broadcasts from a distant civilization.

The dwarves do not know how to make their own radio broadcasts and see no particular reason to do so - the radio stations they get now have jazz and classical music better than anything the dwarves themselves can make.

Most stereotypical Tolkienesque depictions of dwarves see them as living mostly underground. Radio is not a very useful communication medium for a subterran society, because rocks shield radio waves. If they need some form of real-time long-range communication, they would likely stick to mechanical or acoustic communication systems at first. When they electrify their society, then they will likely switch to telegraph wires and later telephone wires (still the standard for communication in modern underground mines). They are unlikely to develop radio technology unless they reached a level of technology where radio becomes a trivial side-product of other, more useful technologies.

...or if they have some pressing problem where radio technology could be a solution. Most of these problems I could think of would involve the surface. When a couple brave adventurers start surface expeditions, then radio could become a useful communication medium. Another possible use-case could be surface radio relays for communicating with far away settlements where tunnel connections are infeasible. A possible underground application could be short-range radio for communication within a very large and densely populated cave (I am thinking of walkie-talkies).

You need an energy source - batteries are "easy enough" but take cooperative resource.
You can have an electric motor based transmitter - and the Romans COULD have built them with their technology and 1900s (or quite a lot earlier) knowledge.
Copper wire. (Doesn't HAVE to be copper but it's doable).
A crystal detector material is useful but not essential.
Razor blade edge type detectors are doable.
Flame detectors if you must.

More details if it looks like people think the answer is useful.
You'd need to make a comment I'd see as I otherwise may not check back for a while.

People have queries how hard it would be to make a "detector diode" - known often as a 'coherer' in the early days of radio. Plain iron filings can be used. A flame can be used. A sharp edge such as a razor blade works, and a naturally occuring "Galena" (lead oxide) crystal, and quite a lot more.

De Forest flame coherer](http://www.geojohn.org/Radios/MyRadios/Coherer/FlameDiode.gif) and Many many coherers, receivers, ... here 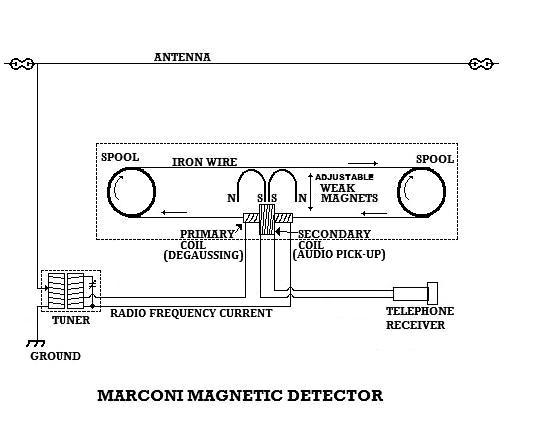 As a comparison of what COULD have been achieved with 'available technology" long ago.

As a parallel.
History tells us of Hero's Steam Engine - created by an Alexandrian.
A novelty / toy / diversion.
They COULD have ended up with steam catapults / chariots / ships / ... . They didn't.

Yes, with some difficulties. Especially if they could reverse-engineer an existing radio. There are many ways to make simple radios, including using three pennies.

Normally there would be great difficulty in making small wires and diodes, but you say your dwarves are already proficient in electricity, which means they are already familiar with capacitors, diodes, and even magnets. The most complicated part of the items I've linked above would be the speaker (converting electricity to sound), but you can see the description of basic speakers here and here.

With an understanding of - and ability to use - electricity, a race with plentiful metal and proficiency in simple manufacturing could definitely make a radio.

The question of mass production, however, is a bit more complicated. It is quite tedious to make reasonably-sized radios (ie radios you can carry) because the components have to be so small. It is unlikely to be able to produce small components without the use of machinery.

That said, sticking with larger, 1800s-era "simple" radios, mass manufacturing could be done assembly-line style. Note, however, that this is not easy to be done at once: there will need to be mining, then creation of the components (wire, baseboard, magnets) as a second step (metal takes time to cool). Then transport those components to a location where dwarves solder and assemble the pieces together.

Note that the complexities here are (a) organizing many dwarves from many different areas (mining, metalworking, assembly lines) to cooperate, (b) finding a fair way to balance the wages and values of each step, and (c) convincing all these dwarves to participate. In other words, it's a large organizational undertaking, which is why capitalistic societies tended to mass manufacture first; these types of things involve so many moving pieces in so many areas. I'm not saying is has to be a capitalistic society, only that the organization capacity and cooperative ability of the dwarves would definitely be a limiting factor.

Sorry, you can disregard this. I just reread the original post more carefully and I see that your dwarves have a tech level at the beginning of industry. It's someone else who has a tech level closer to WWI.

If you're asking whether they could have more advanced than we did in 1913 while still having broadly pre-World War I technology, then I'd say yes. Different technologies aren't guaranteed to advance at the same pace. It's possible to have a society who's radio technology is a little ahead of where ours was while being a little behind ours in a few other ways. Maybe they haven't invented airplanes or cars but their electronics are advanced.

Not the answer you're looking for? Browse other questions tagged reality-check fantasy-races radio industrial-age or ask your own question.

13
How would fantasy dwarves produce steel?
32
How to evolve/justify pescatarian elves?
30
Money and Money, can two different currency types be realistically maintained in the same economy?
10
What adaptations would allow standard fantasy dwarves to survive in the desert?
13
Could accuracy compensate for lack of strength in archery?
2
What would be the best metal deposit a colony of dwarves to sit upon? (except iron)
12
The internet without computers - 1940s era