Most optimal hallways with random gravity inside?

Lets say you have a space ship. This ship will do a lot of maneuvers causing a lot of G forces to go in different directions through the ship. During straight acceleration it pushes the people inside to the back of the ship. During rotation around its front/rear axis it pushes people outward, during rotation end over end some are pushed to the sides while others are pushed to the front and back etc.

Because it is more interesting for storytelling reasons the ship is not controlled by AI and the more "classical" SF space flight and battles are used with a naval feel to how the ships operate.

How do you design a hallway that allows people and small cargo (1m by 1m max) to always travel through it with the most efficiency?

So far my idea was to use hexagonal hallways. 2 opposite surfaces have ridges inside that form handholds and ladders when gravity pulls you directly down (or up) the hall. The advantage is that you cant trip as easily across these ridges when it is your "floor". The rest of the surfaces are smooth with long T shaped slots going through them.

These slots would allow cargo to slide down the hallway. If gravity changes the weight of the cargo pushes the anchors against its walls preventing it from falling.

But this still seems a bit hamstringed. So I am hoping for a more suitable hallway for space ships that people can move through.

For one thing, hand holds do no good under high G. I can imagine the person flying down the corridor and going splat against a far wall, followed shortly by his fingers.

I would have very short sections of hall. The farther you can travel the faster you're going when you hit.

Since zigzags would make moving cargo a hideous experience and would really break up usable interior space, let's do what they do in naval ships: bulkhead doors that automatically shut under high G so long as there is no one in the way or better, they are closed by default and only open when under low G and someone/something approaches. These serve two purposes: they shorten the distance someone can "fall" and they minimize air losses from a breach (that can happen even at low Gs). This gives two benefits for the price of one.

For additional protection, have the walls (plus floors/ceilings if those are relevant) of the halls contain padded emergency nooks that people can secure themselves in.

And pad everything you can.

All of the interior surfaces within the ship, including all four walls of every hallway are made of magnetically attractable metals. All objects within the ship which are not permanently mounted to a fixed point in the ship, are skinned in a ferrous metal foil.

All crew members are required to wear boots, gloves and a spine-guard which contain strong electromagnets. Toe-buttons, hand gesture sensors and (for the spine-guard) a belt mounted on/off switch allow the electromagnets to be activated and deactivated as needed.

Free moving objects which are likely to unattended at the moment of unexpected maneuvers have their own electromagnetic anchors so they can be affixed to a wall or desk when not in use. Standard ships protocols requires that all unattended objects be secured when not physically held by a crew member.

The sleek and shiny look of futuristic space craft has never been about looks. All those beautiful chrome and battleship gray surfaces are present for safety reasons.

One single cylindrical corridor that spirals the length of the ship.

I will admit that I haven't entirely worked out how to place the doors that come off this corridor. Each room would probably need two doors at right angles to each other off the corridor so at any point one door is across and one is up/down.

Secondary advantage: No clear line of fire for boarding parties.

Have the ship designed as one sphere inside another one. When acceleration was applied to the outer sphere strong electro magnets and induction motors on the inner surfaces would rotate the inner sphere in such a way that the accelerating force was always coming from the same direction for the inner sphere.

The SF classic "The Mote in God's Eye" describes some of the interiors of Imperial Navy spacecraft. They rotate about the long axis for spin gravity when not under thrust. The ship could be imagined as a skyscraper or office tower when the engine is running, and a rotisserie when not.

The ship then basically had fittings to move equipment and dog it down on the appropriate surface when the conditions changed. In larger rooms, things like conference tables were retracted into the "floor" prior to despinning the ship, since the table would have a curvature matching the ship's hull so be unusable under thrust. The table would be flush to the "wall" when the engine is running.

Since this is a warship, there is a reasonably large crew (to provide continuous watches, have lots of replacement in case of casualties and man battle damage repair parties), so when the announcement that the ship was de spinning was given, the crew works like a well drilled machine to reorient everything. Hallways would be designed to have two "floor" surfaces, one for spin and one for power, and things like light fixtures, power outlets, switches, maps (you are in Level 5, Section 3) would be placed on the non floor surfaces.

For extra mechanical strength, the hallways might be built out of large tubular sections, so there is no "hard" transition between spin and thrust flooring, and everything else is mounted flush, with handholds build along the "walls" to assist in movement during transition periods and when the ship is not spinning and in free fall. Given the design of the spacecraft, there is likely one or more central "elevator" shafts running parallel to the axis of the ship, "hallways" radiating out at each level and one or more circular "hallways" connecting the "spokes".

One other feature which will be present in any spaceship, civilian or military, is airlock doors which can seal off sections of the hallway or ship in case of a hull breach.

Hallways are tiny, and padded.

Each hallway is barely big enough for one person to squeeze along, rubbing arms on the walls as she does. These walls are padded. If a maneuver unexpectedly throws her against the wall she will not accelerate far before the wall stops her - she is already against the wall. Really it would seem like the wall suddenly leaned on her and that is how they can describe it. Halls could be one way or you could pass someone going the opposite direction with an over/under maneuver. Robots using the hall always are the "under".

People move along the halls no matter what is going on because they are not wusses. If stuff gets hairy you wedge yourself in place with arms and legs and wait a second. Getting pushed and pulled as you keep stride is how you get your space legs. The old hands will laugh at the greenie who gets tumbled backwards until he fetches up against a robot, which inquires politely as to his health.

So a lot of answers focus specifically on the hallways, and of them, cylindrical passages do make the most sense when considering the orientations that gravity would have on them. They would probably be slightly narrower in radius to prevent out of control bounces following multiple gravity shifts.

The hallways would can have moving rails that help move the crew. Specifically, it would probably look similar to an inside-out drop ride: 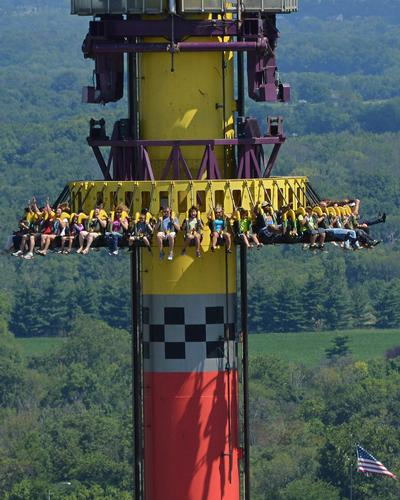 Other than the hallway's shape, I would like to focus on the delivery mechanisms of the hallway itself. The crew members would fasten their suit to the back harness and be transported along the rail. By securing the crew flattened against the surface of the hallway, this has the added benefit of protecting them from flying in the event of a sudden combat maneuver (allowing crew to move between sections of the ship even during combat), as well as the transport not relying on the orientation of the crew members. Also, any moving objects can similarly be transported in such a way.

Between hallways, or sections of rail, the crew can secure themselves to areas by way of something like a zipline harness, secured to the walls.

To keep them protected from any harm while transitioning between rails, each crew suit could be fitted with an advanced 'airbag' system, that can protect the upper (and possibly lower) body in the event that they go for a brief flying session. Hopefully, the harness would keep them from bouncing too far. While inflated, the suit could perhaps look like bubble soccer suits. 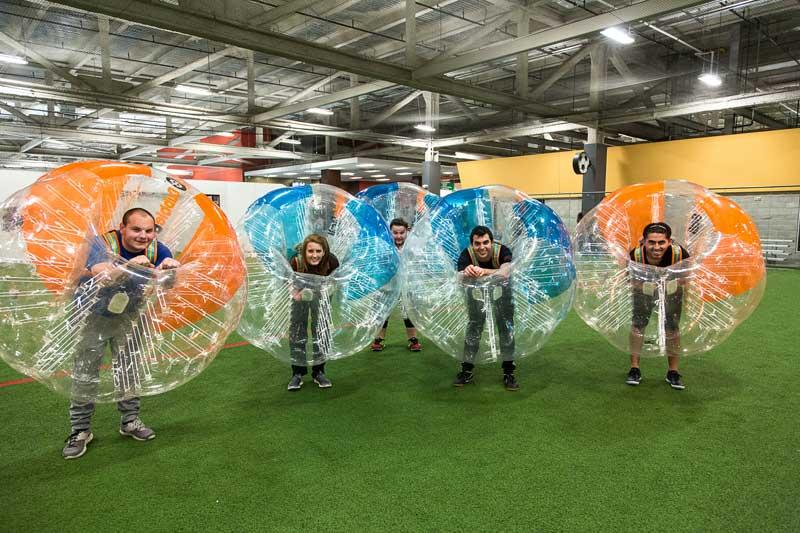 The advantages of using such a harness and airbag system with a cylindrical hallway would be:

I think octagon with rope in the center and alternating half walls might work.

A perfectly round, cylinder shape might be hard to get a good foothold, but octagon might be better, because flat land to put feet on.

The rope would let them climb up against gravity prehaps using a ascender type gadget or slide down, i also thought about fire poles, one going each way.

For the metal barriers, picture a double door with one door open.

I would go with a large suspended sphere in the centre of the ship. this sphere would contain all of the crew and hallways etc, and would always orientate itself so that the bottom of the hallways was where the g force was being applied towards. this would keep everything upright and good.

Not the answer you're looking for? Browse other questions tagged space spaceships construction transport .

15
Would gravity be constant inside a Bernal sphere?
12
Space weaponry?
15
Reasonable size of a sci-fi game planetary system
57
Would a fighter pilot with an invincible space ship be able to conquer the galaxy?
11
What would be the most-optimal location for the Lunar Radiotelescope?
7
Remotely controlled battle starships
3
How big should I make my space fleets?
15
Constant acceleration as artificial gravity. Would flipping over halfway still be comfortable?
13
'Speed Bumps' as a Lethal Trap in Space Ship Combat
3
What is the most optimal thruster placement in a planet-sized creature?