Consequences of a creature with exposed musculature

In the video game Dino Crisis 3, a recurring boss that the player fights called the Australis (a bio-engineered human-Tyrannosaurus Rex hybrid) that has skin exposing the muscles of its body. An in-game file states that the Australis' ravaged appearance is the by-product of a failed attempt at letting them resist the vacuum pressures and radiation of outer space (something that would later get perfected in the game's final boss, the Cebalrai). Having skin that leaves an organism's musculature on constant display seems to be impractical as this would leave them at risk of infection and injury (as in one cutscene, a swarm of Rigel manage to eat their way through an Australis' skin with ease).

Would such a skin be impractical? 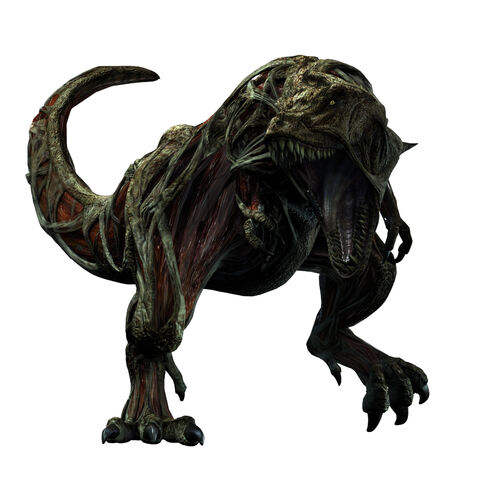 While having skin (or lack thereof) that actually revealed the musculature of a creature would be extremely impractical, the Australis turns this apparent weakness into a strength. Rather than having exposed muscles, the Australis's skin is covered in bundles of dense, tough, but elastic protective fibers that act as a non-restrictive layer of armour and mimic the appearance of muscles. They were designed to appear to be weak spots, inviting attack at precisely the points at which the Australis's hide is thickest and strongest. The beast's actual muscles are tucked away beneath its skin and inside this protective cocoon of fake muscles, where they aren't exposed to danger, dehydration, and disease.

Although other creatures soon learn to ignore these fake weak points, the advantage gained by having a new opponent's first strikes devoted to attacking some of the strongest points on the Australis's body, as well as the confusion when these strikes completely fail to penetrate, give an advantage that could well be vital to the Australis's survival.

However, this innovative protective arrangement leaves the Australis vulnerable to attack from one vector, swarms of much smaller creatures. These creatures are capable of worming their way through and between the protective outer layer of "muscles", allowing easy access to the unprotected and relatively soft inner skin of the creature. Thus, it is easily defeated by a swarm of the much smaller Rigel, as stated in the question.

Such a skin certainly seems to be impractical... but it is not necessarily so.

If the skin was actually split so that it left the musculature beneath be exposed, then the creature would not likely live very long outside a sterile, humid environment before dehydration or infection caused its demise.

However, certain fish have skin and flesh that are transparent. If it is the case that this creature has skin that is transparent and thinner in parts, it would appear to be showing its musculature within gaps in its otherwise opaque skin, however this would be an illusion, and aside from the risk of sunburn to the underlying muscles through the transparent sections of skin, it isn't especially impractical.

Not the answer you're looking for? Browse other questions tagged reality-check biology creature-design fauna dinosaurs or ask your own question.

17
Creature with a non-centralized brain
11
Quasi-creature plants
41
Multiple DNA, one creature
8
Color-changing armored creature?
9
Would my horned theropod dinosaur- like creature be able to lift his head and/ or balance?
3
Are there any reasons why a dinosaurian creature wouldn't be able to have a thoracic hump?
4
A creature with a built in flashlight
3
anatomy or musculature to achieve full rotate jaw?
3
double-knee creature?