A fast aquatic predator with multiple eyes and pupils. Would these eyes be possible?

I’m currently in the works of an alien design, one which lives in the ocean most of its life and occasionally surfaces in shallow waters to mate. It has 4 eyes, with each side of the head having a large eye in the front, and a smaller eye behind it and slightly lower. The larger eye(s) have a large round pupil in the middle, a smaller pupil near the top of the eye and forward, and another pupil below the center one facing down slightly. The smaller eye has a larger pupil facing forward, and another right around the center of the eye. 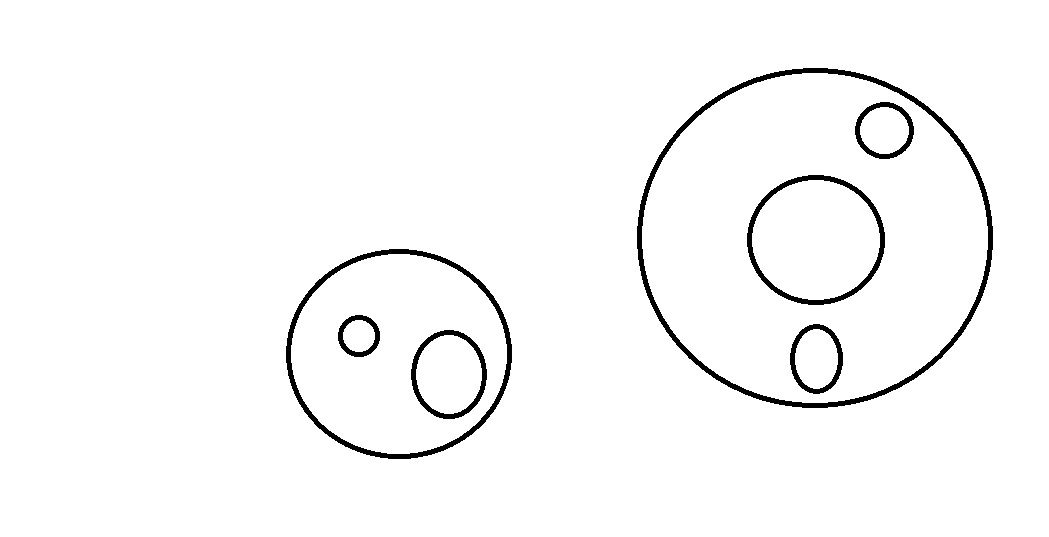 The main pupil at the large eye is used to look out for predators in the deep ocean. The two smaller pupils can see any predators below and above the creature but top pupil isn’t too powerful as it is often looking at the sun at the surface (I don’t know much about eyes like this) and the bottom pupil can pick up larger amounts of light as it is always looking for predators in the deep oceans. This eye can’t see much colour as it’s primary purpose is to see movement in the ocean (I think this is better than seeing full colour for this purpose).

The other eye’s front facing pupil is used to follow prey as this creature chases it though the ocean. The center pupil is constricted during this. This creature communicates with colour and very little sound so it uses both pupils when communicating to see others at multiple angles at once. This eye has 5 colour receptors including the ability to detect IR light (the sun is a red dwarf so I assumed this would be a good idea (again I don’t know enough about eyes to make a educated decision on this)).

So would a set of eyes and pupils like this be viable to a fast aquatic predator (who is also prey). Or would a set of eyes like this just make their vision a blurry mess of colours and light. I can talk in more specific details if need be to help with the question. Sorry if this is a strange or very uneducated question, I came here because I don’t have enough knowledge of eyes and the colour spectrum to figure this out. (Or would this be better asked in Biology? I’ve seen quite a few questions based of how eyes work here so I wasn’t sure)

This is the four-eyed fish: 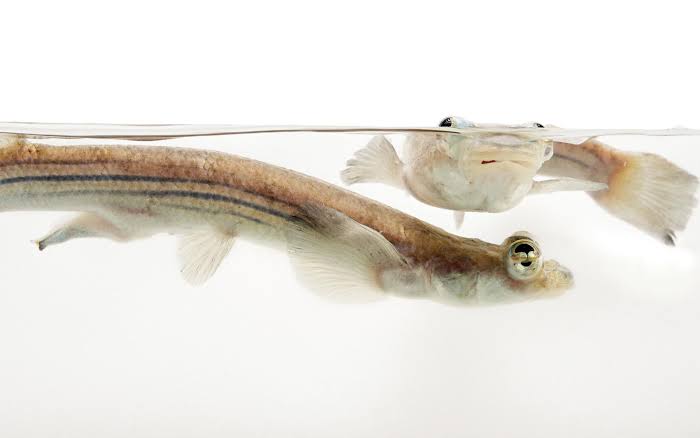 It has only two eyes, but it has two pupils and two retinas in each eye. It evolved to hunt by the water surface, catching prey from both above and below.

Where there is an evolutionary pressure, there is a way to evolve. This fish proves that what you want is possible. However, do notice that this fish evolved multiple pupils because it deals with multiple fluids of different refractive indices. Your fish might evolve to deal with multiple indices underwater if it lives close to blue holes, for example.

Another way for this trait to evolve is if each pupil filters light differently. Mantis shrimp have independent trinocular vision in each eye (contrast with us needing two eyes for binocular vision) and some species polarize light differently in different regions of the eye. Those beasts have an amazing vision and are capable of finding camouflaged prey and threats very easily.

Finally, as I said above, your fish may have developed multiple pupils to have binocular - or trinocular - vision on each eye. That would give depth perception throughout the whole visual field.

There is no problem.

Don't get bogged down by trying to imagine "how the world looks" to such a creature. In the real world, there are all kinds of animals with all kinds of senses coming from all kinds of angles and it just works, because brains are flexible and don't really care where their information is coming from or what form it takes, as long as it contains the data the creature needs.

We can hear things coming from all around us. You can hear your name called in a crowded room 70 degrees behind you and you will know exactly where it is coming from. Fish and insects can feel vibrations in the air and water and know where they are coming from. Insects have compound eyes, each of their segments seeing a similar but slightly different image and the insect's brain has no trouble figuring out what it's looking at. We get two images and the brain is able to perceive this as one picture with additional 3-d processing.

So yeah, you can have a bunch of eyes and the creature's brain will handle the rest.

KISS! (Keep it Simply Stupid) One pupil per eye, multiple eyes because multi-pupiled eyes would become a nightmare from an optical design perspective: 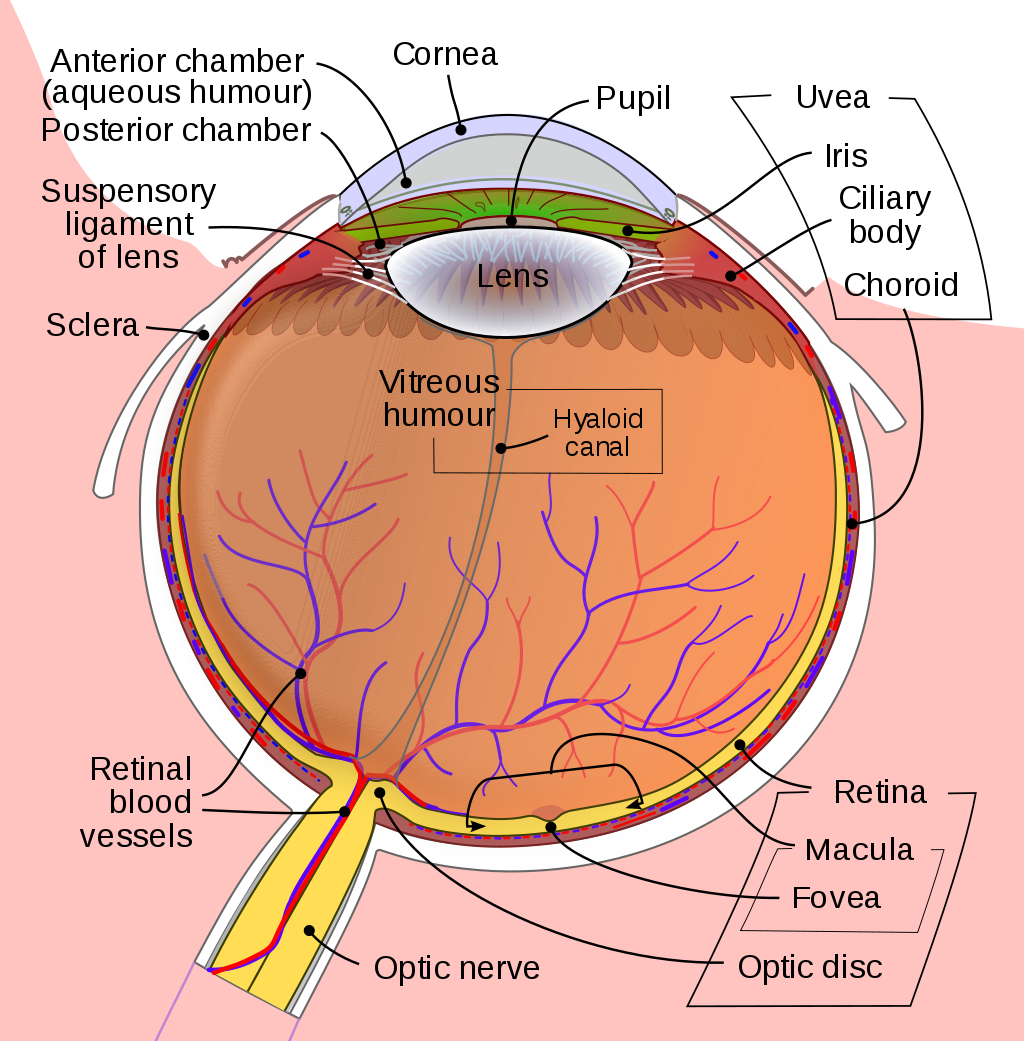 The pictures you posted are about the exterior of the eye but the interior is what makes it work, and there is no biological advantage in multi-pupiled eyes as you'd need multiple lenses, irises, ciliary bodies, ... and from an evolutionary perspective it is "cheaper" to have one design that works and have that replicated like spider eyes: 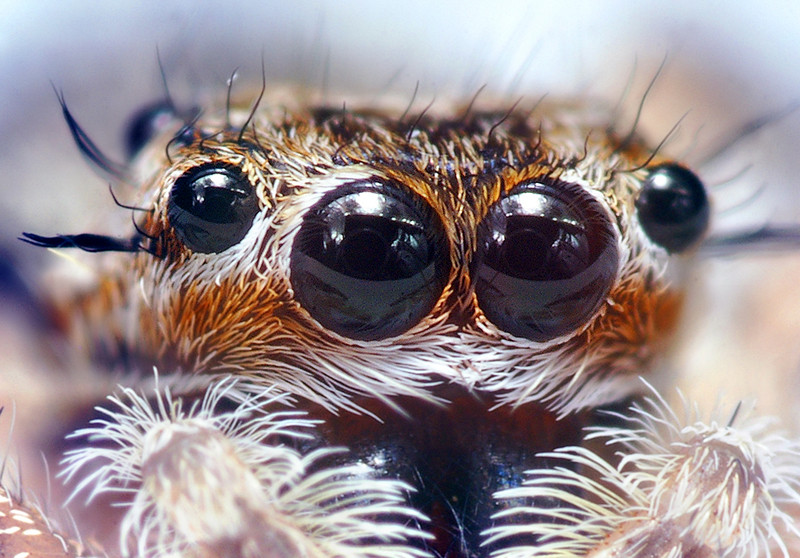 If you insist on having multiple pupils per eye, go for the Gecko solution and have multiple pinholes in one pupil: 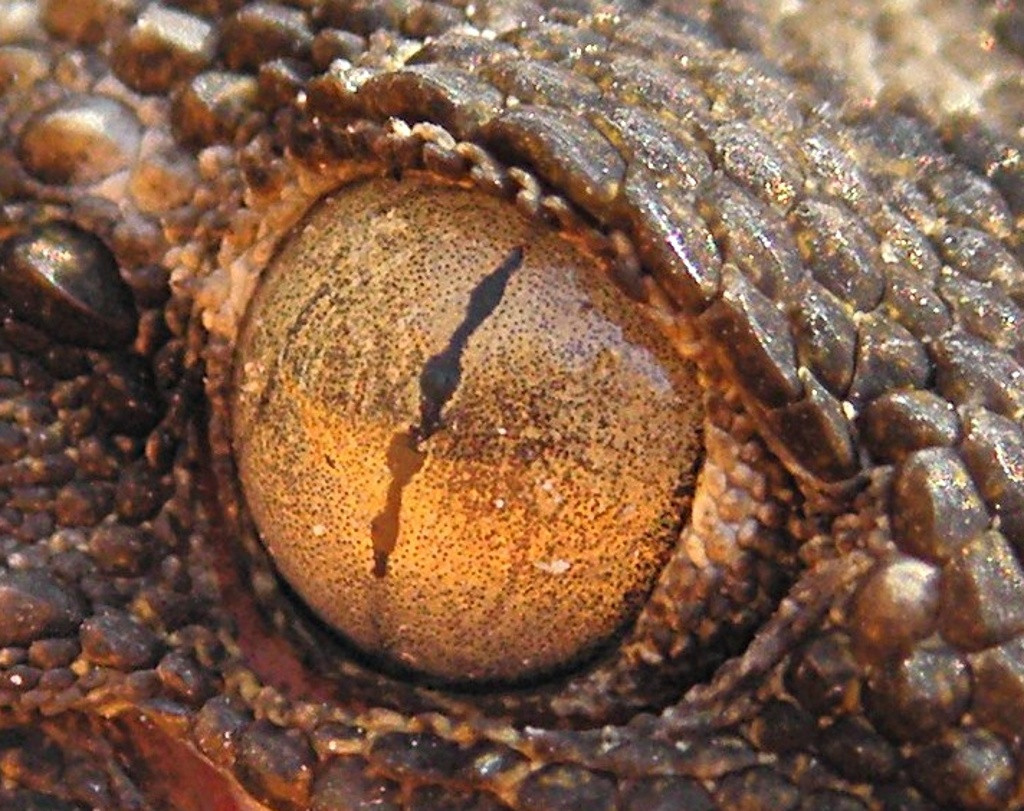 Probably not what you wanted to hear as you've put considerable thought into those multiple pupils, but always take the Mythbusters approach about things and blow shit up analyse how stuff works first.

The Mantis Shrimp (certainly a fast predator on some scale) has triple-sectioned compound eyes (each section having a pseudopupil, as others have called out on different animals' compound eyes), and the eyes are very movable on stalks. While this doesn't optically equal the idea you've asked about, the complexity and distinct functionality of the separate portions of Mantis Shrimp eyes suggest that there's nothing unbelievable about your idea from a biological/evolutionary standpoint. Evolution can be weird[1]; the result is not always "straightforward" or "correct", it only has to tend to result in survival/reproduction.

It sounds viable, although I'd doubt the layout is strictly necessary. It doesn't have the requirement of the four-eyed fish to view in two different mediums with different refractive indexes at once, and so it is probably better off without multiple pupils, but multiple pupils is entirely valid as well.

I'd especially question the need for one set of eyes to perceive predators and a completely different set for chasing prey - normally the same eyes will work for both tasks, unless there are wildly different requirements for noticing them. An example might be if their predators are primarily also fast-moving (requiring wide-angle, movement-sensitive eyes) but their prey is sedentary and well-camouflaged (requiring sharp eyesight in a smaller area). Another example is if accuracy is needed to catch the prey (it won't usually be needed to run away from predators).

An example of how a single eye serves multiple purposes are human's general-purpose eyes - very sharp with colour vision in the centre for accurate aiming and identification, with reduced accuracy, lower colour perception, but high sensitivity to movement in the edges for noticing predators pouncing out the corner of your eye (or in the dark). Several single-purpose eyes might allow a simpler nervous system, though.

Other options include multiple eyes in place of some of the multiple pupils, and non-eyes to cover some of the needed functions - many simpler animals have just a light sensor on the top of their bodies, so they're able to tell when a shadow passes over them and run away. Large multi-purpose eyes with wide-angle lenses and heterogenous retinas would also work - again, like human eyes, which have different cells in the centre of the retina compared to the outside, these creatures could have different cells in the bottom of the retina (fewer, less-sensitive, mostly motion-detecting for seeing moving silhouettes against the surface) compared to the top or back.

I doubt infrared needs to be picked up by these animals, even if the sun is a red dwarf, unless they live close to the surface. Longer wavelengths of light are strongly absorbed by water, which is why water is blue, and infrared is absorbed very strongly (see https://en.wikipedia.org/wiki/Electromagnetic_absorption_by_water).

Not the answer you're looking for? Browse other questions tagged creature-design aliens sea-creatures vision .

5
How would different kinds of eyes (polycoria, differently shaped pupils, etc.) work?
50
Why would an underwater creature remain lodged to its prey?
15
What would people with black eyes see?
6
How would eyes, pupils and camouflage evolve if the sun was stationary near the horizon?
8
How would the human eye need to change in order to see in low light without any changes to physical appearance?
11
Could a deep ocean creature use some kind of bacteria in its body as a way to generate oxygen?
10
What is the scientific basis for yellow, bioluminescent eyes?
0
Can a flying predator have slit-like pupils?
8
How could be a relatively "universal" eye?
9
Are there any major problems with my creature design?