How would iron smelting work in a planet with no oxygen?

Imagine a small planet, rich with iron, but with a negligible atmosphere, mostly devoid of oxygen. Once harvested, how could iron ore be smelted and refined into iron? And would the ore itself be different in such an environment?

would the ore itself be different in such an environment?

Pretty much all the iron ores on Earth are oxides and hydroxides. No oxygen, no water, no conventional iron ores. (I listed a few of the common ores in another answer of mine with various relevant wikipedia links; I shan't copy it all out here).

If you had water, you'd have a ready supply of oxygen, of course. Given that this would trivially solve the issue, I'm assuming you do not.

how could iron ore be smelted and refined into iron?

Well, you have to think about what form the iron would be in. Metallic asteroids have native iron, for example, so whilst it might need refining it is already in a handy metal form and so there's no smelting required at all. Odds are good that in the absense of a reactive atmosphere, most of the iron you'd find would be in the native form. Earth had a lot of free dissolved iron and native iron before a bunch of oxygen-producing organisms appeared (see the formation of banded ironstone, for example).

Other ores do exist, of course. Techniques do exist for smelting sulphides (such as FeS2, aka. iron pyrite or fool's gold) but generally no-one bothers because there are plenty of sulphur-free iron deposits that are more easily smelted. Copper sulphides are exploited commercially, but their 2-step smelting process requires oxygen. Probably you'd have to import some and carefully recycle the resulting sulphates, if all your iron was only available in sulphide form. I suspect you'd need some kind of biological action to cause that to happen, though, and even then I bet that you could mine native iron if you just upped your prospecting game a little.

Of course, you could probably just take the force majeure approach and just chuck loads of energy into the problem, which will eventually solve any inconvenient chemical bond issue, but that feels a bit like cheating...

edit: for those who might be interested, the "force majeure" is basically boiling. Pyrite melts at about 1400K, and at somewhere between there about 2500K or so the Fe-S bond (or indeed pretty much any bond) will break. What happens after that depends on how soluble elemental sulphur is in liquid iron... it might vigorously outgas immediately, or you might have to electrolyse it or even raise whole the temperature of the whole lot to 3100K to boil the iron to drive it off. You probably don't have to evaporate and distill the iron, though. This is quite energy intensive, but less so than vapourising and ionising tonnes of ore and elctromagnetically separating it ;-) At that point, importing some icy chrondritic asteroids for your smelting operation might be the simpler solution, though...

While there would be specific methods used depending on the ore and nature of the environment, I'm going to assume there is a high tech society or entity actually doing the mining (a sort of space mining operation), which can be applicable to almost any environment.

A source of high intensity heat energy is needed, such as a large solar mirror or electric arc furnace is needed in order to take the ore and not only vapourize it, but bring it to a high enough temperature that it can be ionized. 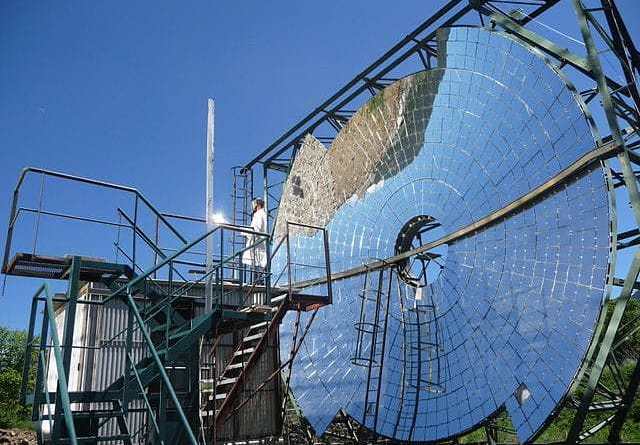 The second item needed is a mass spectrometer scaled for this operation. The plasma is fed through the spectrometer and different ions separated by the magnetic field. The iron is then fed into a cold trap and condenses onto the collector. This is actually very pure iron, which has different properties from what engineers usually work with. If the spectrometer is advanced enough, other plasma streams could be mixed into the iron stream to create alloys like steel that have the desired properties for the customer. 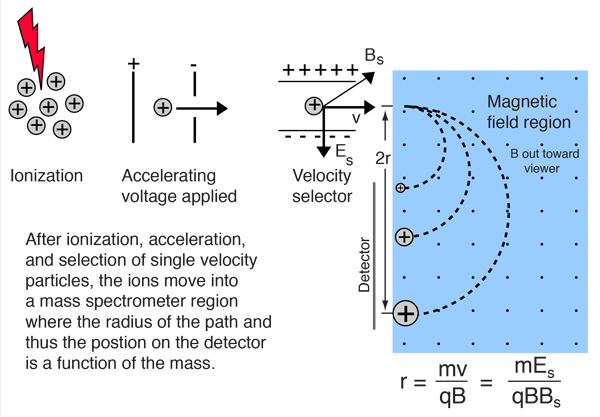 Principle of a mass spectrometer

Combining these two devices allows you to separate and combine elements in any order you like. Adding an advanced deposition system and programming allows you to "3D" print almost any item: this is a form of "Santa Claus Machine"

For a world without oxygen, it will depend on whether there were any water on this world.

For native Nickel-iron which is found on most celestial bodies that does not have any atmosphere nor water (deposits will come from iron-rich meteors, which will not be oxidized, and is available even with total planetary differentiation that sank any primordial iron into the core), all you need is a magnet(you won’t even need magnets if your world is of class M, which means there was a high content of metallic iron, as just sawing off a part of the ground will yield malleable metal) to collect the granules of iron from the regolith.

For iron oxides (which is often found co-located with silicates), you have two choice:

if The world have water in the form of ices or a liquid ocean(as for prebiotic earth), then you could probably dissolve your rocks using an acid(depends on what other elements are found, acids are generally made from the respecting salt/salty materials using diaphragm electrolysis from the anolyte. hydrochloric or sulfuric acids may be used, as these ions are often found in ices, volatiles and prebiotic oceans. The resulting solution is then electrolyzed in a diaphragm cell again, depositing iron on the cathode and regenerating the acids (along with oxygen) in the anolyte. The water and acids in this process is purely catalytic, as it is regenerated in the reaction.

For worlds without any water deposits, if you can’t import any hydrogen/water as a catalyst, the Thermite reaction will be extremely useful when it comes to refining iron. First, most rocks on the surface of many planets will generally be a mixture of alkaline metal oxide, silicon dioxide and aluminum oxide, with the occasional calcium thrown in. This composition generally melts at 1200 degrees C maximum, and depends on the exact rock composition, can either have viscosity as low as cooking oil or as high as taffy candies. Electrolysis of the molten rock using platinum electrodes(as they don’t wear out) yields alkaline metals at the cathode and oxygen gas at the anode, alone with silicate glass. Divalent cations like magnesium, calcium and iron will also be deposited. The high temperatures will force these metals to vaporize, and this mixture of metals will be used to reduce any oxide ores to the metal. Depends on the rock type, the electrolyte will start to thicken as the reaction progresses, and should be replaced when the conductivity of the molten rock have dropped below economical values.

Any iron in this molten rock can be easily harvested, as it will plate out on the cathode first, and the mixture of reducing metals can now be used to reduce the actual iron oxide ore using high temperatures. The trick here, is to use an excess of the reducing metal mixture, so the excess silicates inside the ore is being turned into silicon. The iron then drops out as a molten iron-silicon alloy, which can be purified using oxygen from the rock electrolysis cells, leaving behind silica glass. The slag is primarily sodium and calcium silicate, which can be electrolyzed to recover most of the sodium-calcium metal. Any aluminates would have been converted into aluminum metal before the alkali metal silicates have became irreducible due to being thermodynamically stable, and drops out of the solution as a phase-separated layer from the iron metal.

As This process removes silica from the regolith and iron oxide feedstock, in theory we could separate all the iron, silicon, alkali metals, calcium and oxygen from any given piece of rock. The alkali metal rich slags of the reaction can be electrolyzed, which recovers most of the mobile cations, and the residual silica-alumina reduced to elemental silicon using aluminum metal. The alumina product is then reduced using sodium, regenerating aluminum and oxygen. We have achieved total separation of the rock feedstock, and refined iron from the process.

For the iron sulfides, we can employ thermal separation followed by, depends on whether hydrogen is available, wet chemical or Thermochemical methods to refine the Ferris sulfide product. Pyrite breaks down into ferrous sulfide and elemental sulfur at above 500 degrees C, and the sulfur will start to distill over at 700 degrees C. Vacuum distillation can therefore be employed to reduce all the iron and other metal sulfides to the monosulphide variety.

The wet chemical method of separation uses an acid to dissolve the ferrous sulfide, generating hydrogen sulfide gas and an iron salt. The hydrogen sulfide is decomposed at above 500 degrees C, and the hydrogen gas is recovered to either reduce any metal oxides at high temperature, or reacted with a source of oxygen to generate water.

The iron salts are electrolyzed in a diaphragm cell to recover the iron as a powder on the anode, and regenerate the acids and oxygen gas on the cathode. The oxygen gas can be used to regenerate water from hydrogen or hydrogen sulfide(yielding sulfur).

If water is again unavailable, the iron sulfide can be roasted in oxygen gas derived from melt electrolysis of rocks containing mobile cations, and the sulfur oxides reacted with the alkaline metals to yield low melting metal oxides and sulfides, both easily electrolyzed to regenerate the oxygen and alkaline metals, while the sulfur is boiled off at the anode due to the high temperatures involved. Make sure you change the receiving container when the sulfur is gone and the oxygen starts to come out. (Fluxing the magnesium-calcium oxides with some more regolith may be necessary, but the sulfides can be easily melted and electrolyzed under mild conditions, leaving the oxides behind). As long as you keeps recycling your mobile cations into the metals using electrolysis, the roasted ore (or even the sulfide ore itself) can be reduced in a thermite reaction to finally yield molten iron. Make sure to electrolyze the slag to recover your reducing agent, and if the sulfide ore itself is what being reduced, the efficiency of alkali metal recovery can reach nearly 100 percent. You also get elemental sulfur as the byproduct, which is handy to use as cement for your processing facilities and mines, as normal concrete won’t harden without water.

Not the answer you're looking for? Browse other questions tagged planets natural-resources mining or ask your own question.

4
Can you forge iron from oxide dust?

20
Would oxygen pool in sink holes if the upper atmosphere was helium, hydrogen and methane?
13
A planet made of iron
6
Can we land on a planet with methane-oxygen atmosphere?
7
Could a carbon/silicon/oxygen planet exist?
3
Would an exoplanet highly rich in Iron (and other metallic properties) have any effects on technology?
4
Is an earthlike planet with ammonia oceans even plausible?