Thunderstorms but with Fire!

The planet is huge roughly four times the size of earth, with lots of hydrogen in its atmosphere (group A water in Hydrogen out, B water out.) it is also very humid. what do I do to have giant Storms in the sky with Fire instead of thunder? What would these storms look like?

3: During your storms there is atmospheric mixing. Oxygen rich gases from the upper atmosphere are pulled down into denser regions. They come into contact with hydrogen gas. When concentrations are right and there is a spark, the oxygen and hydrogen combine energetically.

In these circumstances there would be an excess of hydrogen and a relatively small amount of oxygen. The result would be a slow moving wave of flame, or deflagration. 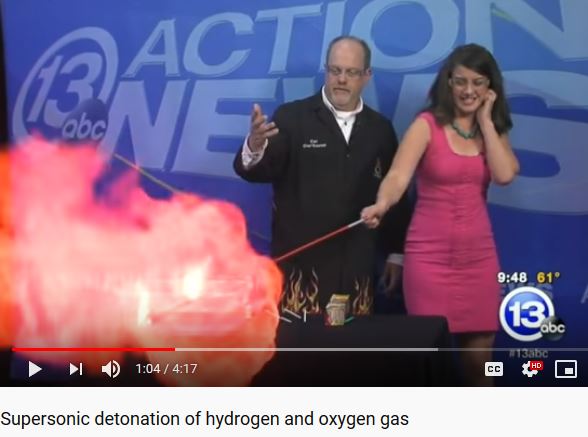 A balloon filled with 100% hydrogen is ignited with a small flame. As the flame ignites the hydrogen gas, it combines with oxygen in the surrounding air. A large, but relatively slowly moving ball of fire is created. This is called a deflagration.

Depicted is the deflagration - the supersonic one is next and it is an explosion, not a sweet flame cloud.

These are your clouds of fire. Flame is hot gas and so would rise. An initial fireball would spread laterally according to air currents. In still conditions it could form a spreading, rising ring of fire as oxygen is exhausted in the center. Very big rings would just look like a wall of flame moving across the sky, curling and rising as it went.

H2+O2-> 2 H2O. The result of these flame clouds is water vapor. This would condense in the upper atmosphere and serve to nucleate raindrops. I could imaging that under conditions of atmospheric turnover, a storm begins with flame clouds of this sort which in turn start the rain. Once the rain starts in earnest few additional flame clouds form.

Without Oxygen, you will have a hard time burning the hydrogen to create a fire. Since you do not mention the composition of atmosphere, one possible way you can achieve the Firestorm could be via a sudden outburst of oxygen in the atmosphere leading to the right conditions, which are otherwise absent.

This could be due to geological events disturbing internal rock formations storing oxygen - which got formed in the first place due to microbial activity decomposing water into Hydrogen and oxygen. Now, you want this firestorm to take the place of thunder. The regular thunder is produced by interaction of clouds. Instead, you can use a cyclone - they can easily span 400-700kms. This gives you something like a firenado, which you can modify to support taking the oxygen to the upper reaches of the cyclone, where it interacts with hydrogen to lighten up

Another property you could utilize here is that oxygen is much heavier than hydrogen, so they both would be at different altitudes in the atmosphere. So, by using a geological/climatic phenomena that brings the two in contact - say via heating up of surface by sun's rays, variations of walker cycle etc, you can then lighten them up.

Not the answer you're looking for? Browse other questions tagged science-based planets environment climate or ask your own question.

2
How would tectonics behave on a two continent planet?
15
Fire Resistant Flora
18
Fire Resistant Fauna
5
Surface temperature of a icy rogue planet
11
A world with a moon orbiting much closer than ours
4
Exoplanetary Review: Acid Rain
7
On the viability of living balloons
3
Climate on a planet with huge tides
4
Planetary tidal locking causing asymetrical water distribution