How would Centaurs be utilized in modern armies?

My world is in a modern setting but populated with a variety of fantasy/mythology races and creatures.

I am trying to figure out how each species would best be utilized in a modern military, assuming he has human intelligence and is willing to serve.

The obvious pros of centaurs are that they can carry a lot of weight without being slowed down, and generally their high speed. On the other hand, they are a very large target and they have trouble maneuvering tight spaces. I am thinking they would mostly be used for logistics (i.e running with supplies from safe bases to the front line).

Could Centaurs be used in actual combat? Would they have any role at all in the military?

Would they have any role at all in the military?

All their advantages are basically physical ones of little use in normal combat situations, so I think their best use would be as military police. They have the size, strength, speed, intimidation potential and stamina to deal with military personnel in many scenarios.

A good alternative would be as paramedics, they can carry wounded soldiers faster, easier and more often even if wearing heavy armour against bullets.

Could Centaurs be used in actual combat?

Sure, little kids, old people, cripples and the insane have all been used in combat, but due to equipment and other factors they're all less desirable than able bodied adults.

Assuming that they would be fine in forested or mountainous terrain?

I'd see a role for them not in front line units, but in logistic support, but only in harsh terrain. They are too big for being front line soldiers. However, in situation when something has to be carried (dragged) in terrain not suitable for terrain cars, they would outclass any human being.

Horses have no longer practical usage in modern armies, because motorized vehicles are more effective within the modern context of large scale warfare.

The same can apply to your centaurs.

The only niche where they can prove useful is small tactical infiltration support, where they can serve as advanced beasts of burden: they carry loads, but with the human torso can also use a weapon if needed, while a horse or a mule would simply take shots.

Back in the day, Boston Dynamics made a slightly silly robot called "Big Dog" which received some DARPA funding. Also named the "Legged Squad Support System", it was intended to be able to walk alongside infantry across rough terrain and along narrow paths, carrying up to 150kg of gear which would obviously be good news for soldiers who might have to carry 20-40kg of equipment with them and even then compromises would have to be made. 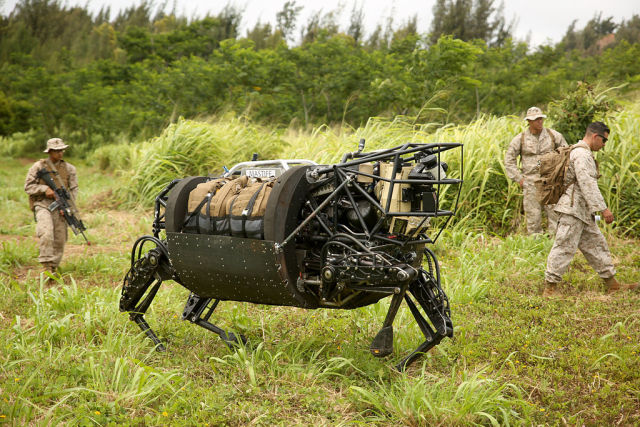 The robot ultimately failed, not because it was a silly idea but because it was noisy as hell. By comparison, horses can move extremely quietly when required, so your military centaurs would immediately fit into this niche, fulfilling a requirement which would appear to be something that real world militaries actually care about.

They'd be less useful as actual soldiers though... they present a bigger target than a person (making them easier to shoot and harder to hide), they're not as manoeverable as a person (think about how a horse is going to do a 180 in a narrow space) and they can't easily make use of things like ropes, ladders or inconvenient staircases to access higher or lower areas. They can't operate vehicles without serious modification, they'd be a right pain to transport by air or by small boats.

Parachuting of mules is a thing that has happened in the past (there's an intrguing paper I can't find the full text of called Dropping of mules by parachute from Dakota aircraft) and as many as 1300 mules were flown into Burma, though alarming phrases like "the jerk of the parachute opening could burst their mesentery artery" suggests that there might not be many centaurs interested in forming a pegasus unit joining the parachute regiment.

Finally, they'd be harder to feed and they'd need a whole additional set of medical skills and equipment in order to keep alive and well, presenting something of a logistical nightmare. There's not much in their favour outside of some pretty specialist roles.

I'd say their usefulness would have ended at some point before WW1... probably pre-Boer War, ~1900 (when British cavalry stopped using lances), but might have still been useful and relevant into the mid-to-late 1800s.

There are some roles where a centaur's large size and high profile make it a liability - front line infantry, tunnel clearing, flying manned aircraft - but most of these are becoming marginal for humans as technology advances. To give a few thoughts on where centaurs would be equal or superior to humans based on my own experiences in a light infantry battalion:

Let's face it. Centaurs may run fast on a straight line in the open field but that's it for their advantages.

They are bigger targets, will have a horrible time busting into urban enemy positions, and can't pilot ant vehicle made for humans.

The only place where they won't be causing problems is bebind a desk. If they are to do damage, give them some RC toys.

If you have ever read the book Leviathan or the rest of the series, they have a series of genetically engineers animals that are used as weapons platforms. A centaur could theoretically become a very heavily armored soldier due to their enhanced stamina and carrying capacity.

An M249 SAW could be a good weapon for a centaur. It could be mounted on the flanks of the horse section, and remotely fired from the human section. It would, of course, be slightly extended from the body because of heat and other reasons. This sort of unit would be rather expensive because of the cost to fully armor and equip it. An M249 has a manufacturing price of 4,807 USD. And the cost to armor it would be even more.

Another idea is a rider that could mount the centaur. (we are assuming the centaur permits it) The rider would serve to reload the mounted guns and provide covering fire in all directions. A horse can carry up to around 25 percent of its body weight in cargo. We are going to say the weight of this centaur is going to be the sum of its horse body and its human torso. I am going to take the liberty of saying that this particular centaur's horse section is around 1,500 pounds. The average human torso and head are about 113.1 pounds. So this means this centaur would be able to carry about 403 pounds. A full human male in combat gear is about 250. Two fully loaded M249s would be 44 pounds. Added ammunition would be about 40 pounds. So all in all this would work.

So these troops could not be simple front line soldiers, they are too expensive. I believe they would suit a more shock trooper role. I see it as a modern equivalent to the war elephants used by Alexander the Great. I hope this helped!

Not the answer you're looking for? Browse other questions tagged warfare fantasy-races mythical-creatures or ask your own question.

17
Could you strap shotguns to the back of a centaur to be fired during a charge?

40
How do centaurs get enough calories to live?
34
How do centaurs get enough oxygen to run
4
Combat training for a multi-species society
39
What difficulty would the Roman Empire have besieging a fantasy kingdom's 49 m wall?
10
Knights vs elvish guerillas
14
How to realistically implement magic-users in medieval warfare?
4
Draconic Centaurs
21
Finding real world historic examples of cultures/organizations/tribes to represent Orcs
3
How big should I make my space fleets?