What would be the best Tauren equipment to maximize it's charging abilities?

I'm currently designing a Tauren race (as in Minotaur, not centaur), pretty similar to the ones found in the Warcraft universe*. They are a biped race, with the head and feet of a bull, arms and torso of a human and the neck being shaped as to put the head before the rest of the body.

Given their physiognomy, they would be ideal to fight in the first lines and charge at the enemy using their horns.

This got me wondering, what (medieval level of technology) equipment would they use to maximize their charging abilities? I'm thinking maybe equipment used to reinforce their horns, but any other ideas would be greatly appreciated.

A neckbrace would be a good place to start...

Your Tauren design (or rather its charging tactic) is going to transmit a lot of force straight down the spine, which will very easily lead to compression fractures of vertebrae. Humans have killed themselves this way, and I'd imagine a bull charging full speed into a brick wall could hurt himself pretty easily.

When a real bull charges, it doesn't simply smash into things; it swings its head in an arc to gore and throw its opponent, and often the bull stops just short before doing so. Bulls rarely charge through something, so the full force of the bull's body generally doesn't get transferred into whatever it's charging (and by Newton's laws the bull's spine doesn't get crushed).

If you really want your tauren to smash through things with the full force of their charge, you'd want something that can transmit the force of the charge around their neck into their shoulders. A neck brace would be a good way to do this. That way your tauren can actually use its massive horns to pierce heavy machinery and crash into things.

To maximize the Tauren charge you just need to protect the charging Tauren.

The purpose of a cavalry charge is to scatter an unprepared formation and (ideally) cause a rout that allows infantry or light cavalry to exploit the weakened line. However, a dense, disciplined formation of spears would stop the charge in its tracks by using the charging Tauren's own mass to cause terrible injuries. Maybe your Tauren are brave enough to charge head first into a wall of spears, but without some protection the effectiveness of that charge will be limited, and the costs high.

So, just give your Tauren some barding: reinforce the forward-facing armor with slanted/curved plates so head-on hits with spears or arrows glance away harmlessly.

A Tauren charging straight at you will leave you doubting your chances to win the fight, but Tauren standing in front of you after plowing through a couple rows of soldiers without a scratch will get rid of that doubt.

At the very least, given them a nice chanfron: 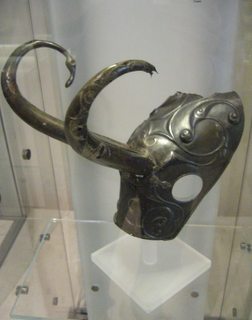 The biggest help? Get them to saw off their horns. They are heavy, useless weight. Charging Taurens who get tangled together by the enemy throwing a net or braided rope are in big trouble. Those horns aren’t well placed for real combat— I bet they’re used primarily for ritual and mating combat these days.

Ditch the weight and get them a pike.

If your Tauren is a front line kind of guy, He needs the equipment that would benefit that kind of combat. This will range from the same stuff as seen throughout history, but some is going to be specific to his race.

A pike. You want to poke the other guy before he can poke you. A tried and true weapon.

A short sword. He's going to be in the thick of things. Big wild swinging weapons are dangerous to your friends right next to you, not to mention that a big swing takes time. Something short and sharp when you are in the middle of a crowd will be more helpful. After all, the Roman Gladius was hugely effective in infantry actions for hundreds of years.

Now the not so typical:

Shield. Again think Roman legionary, but notched to account for your Tauren's head. Give it a large-ish central conical spike as well. Your guy is stronger than a human, so as he pushes forward into the enemy line this could help turn the enemy shields inward, opening them up to be poked with sharp things. It will also help protect his chest.

Helm. It should protect his forehead as well as the base of his horns, if not the entire horn. Give the horns some edges as well as sharper points. A toss of his very strong neck would be a decent slashing attack.

Leg protection. Armor for his lower leg and ankles is critical. The shape of the back legs of hoofed animals means that they are pretty vulnerable to lateral type impacts. One enemy with a heavy shield might be able to smash down and sideways into those small bones above and behind the hoof and cripple the Tauren. He is also going to be vulnerable to hamstringing and damage to the Achilles heel (or bovine equivalent), so protect that as best you can without sacrificing too much range of motion.

maybe add more spikes such as the helmet and armor, since the tauren already have horns that have risk from getting hook or tangled by enemy anyway, example like Gutbuster Brigade but not just normal cylinder spike but thin and sharpened edge spike like sword edge, maybe add a curved shape to it especially for each arms side like saber sword, and not to randomly forms or place like the gutbuster armor, and maybe make the edge more on horizontal side and face the same direction, except some in the hand that more face downward as secondary weapon similar like katar weapon or wolverine claw (not necessary if your tauren have secondary weapon) so even if the tauren just past/charge through, the enemy side can get slash or cut by the spike sword if they get too close just from charging forward, similar like wild boar charging with their curved tusk, (from https://www.123rf.com/photo_234880_wild-boar-with-tusk.html) 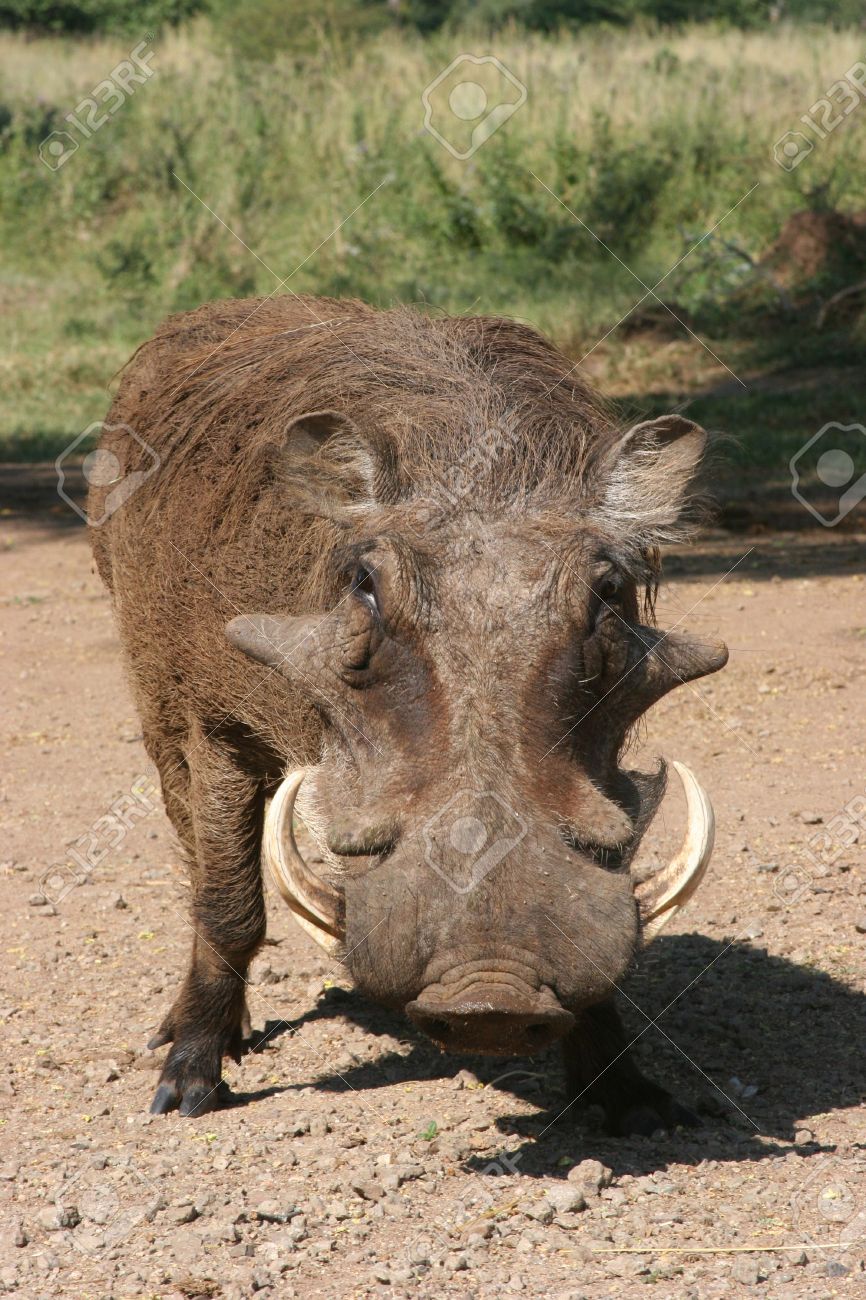 and with sharpened sword spike hopefully it mitigate it from getting stuck or enemy body dangling on the horn or spike to burden or drag you down by shacking or swing around to cut or loosen/or throw it out, similar like bull,rhino,and elephant charge by swinging their head updown to keep the victim from stucking.

this outside of bonus in wielding weapon in the hands such as lance or other heavy 2h weapons, also i suggest to add or dual wield two thick shield too, prefferably tower shield type, if you want to give more push to enemy formation while giving more protection on the frontside, and you can also have protuding spike in the front of the shield too if you want but alas this may can end up getting heavier since many victim will get stuck and burden it, but it far better than it get stuck on your horn or spiky armor though. (from https://us.battle.net/forums/en/wow/topic/12505811275?page=2) 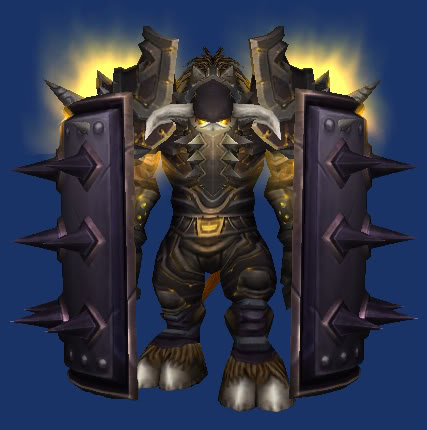 here an example image that (so far) i consider closest to the curved blade spike (the pauldron side, and the image is not the representation of the armor i suggest just the blade or spike) althought it face vertically rather than horizontally and mine is more saber/scimitar or boar tusk smooth curve like, rather than reverse falx or katana kind of curve, i hope this image can help to get what i mean. 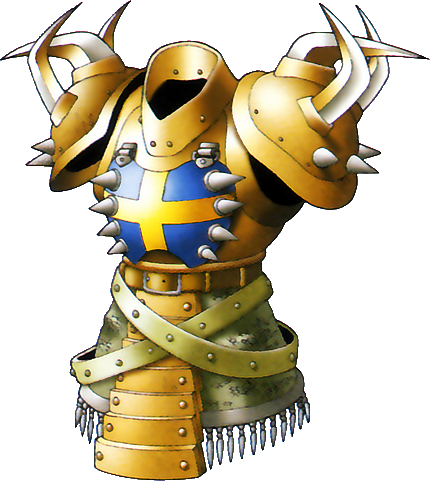 Why would they want to charge in head-first? Obviously a bull would do that, because bulls don't have any weapons available to them apart from their horns. Taurens have hands, which means they can hold swords, axes, spears and shields, which are all infinitely better things to fling towards an enemy than your face.

If you want to maximise the impact of a charging Tauren, I'd suggest the same equipment that would maximise the impact of a charging human or a charging horse - body armour, and a long spear or lance. To get the most benefit out of the Tauren build, I suppose they might choose to hold the spear slightly differently to a human - they might brace it against the top of their head for stability, depending on how low their head is when in a charge.

I wouldn’t but much stock in the horns’ weaponized aspect. It wouldn’t be ideal to use your bodily hors against metal armor and weapons, especially when you have to put your head in danger.

But as for equipment, i think a horseshoe type attachment to the hoof which firstly protects the hoof over all sorts of ground and provides better impact when kicking in combat (assuming they are as large comparatively as Tauren are in warcraft, kicking or stomping would be fairly common against the smaller races). I would say a heavy shield would be useful so they can put their whole weight into the charger and not fear as much upon impact. A lance of some sort as others have mentioned is also a good idea.

But back to the horns... a charge’s best use is to impact the morale of the enemy. Yes, they can smash lines and kill a lot, but charging a disciplined force often leaves the chargers knee-deep in enemies on all sides. A rather brutal death, usually. So to maximize the fear factor and morale damage, some sort of helmet for aesthetic purposes would fit. Something to emphasize the horns, the stooped head, etc. a sort of demon mask, if you will.

And many historical helmets did such a thing. Killing the enemy is one way to win. Making them run is often faster, safer and more effective.

You could do some magic hand-waving and have an alchemist create a potion that has similar effects to meth or cocaine, so increased energy, pain resistance, increased anger.

Not the answer you're looking for? Browse other questions tagged weapons fantasy-races armors .

20
Anatomically Correct: 4-legged sapient creatures (“centaurs” etc.)
10
How much of an advantage in medieval-style combat would it be to have four arms with pivoting shoulders?
3
How to fight against Lion People?
12
What kind of equipment would a giant-slayer use?
4
Rail Transportation with Races Described Below - Specifically, Seating
3
Seating in Integrated Cities - Not all humans, different species
4
How Would a Highly Organized Standing Army Accomodate Different Sentient Species?
1
What weapons and equipment would be best for a Dullahan in this setting?
7
What weaponry and equipment would a 'demonic' race use?